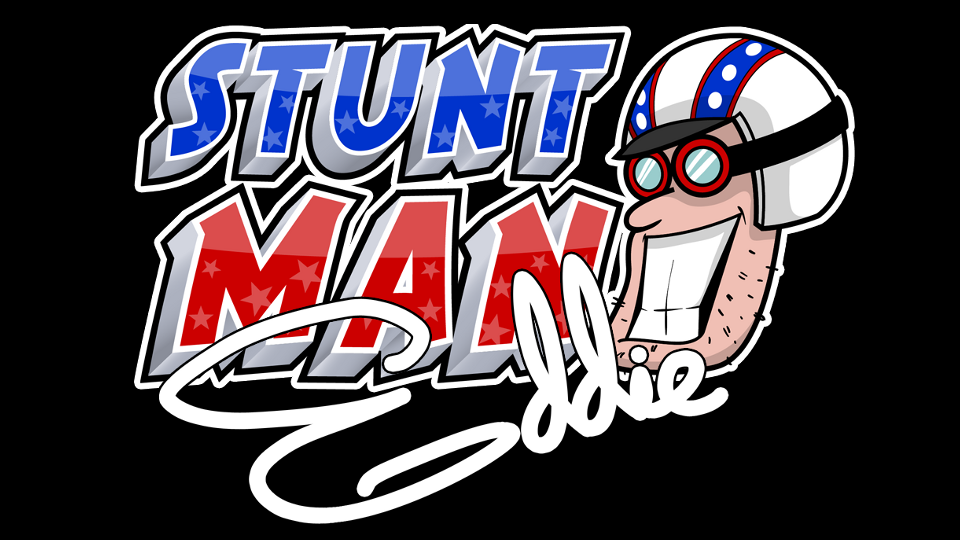 If you’ve ever fancied yourself as the next Evel Knievel there is now a safer way to try Motorbike stunts thanks to Go Games. In their latest mobile title you play as a Motorbike Daredevil – Stuntman Eddie. We’ve been checking the game out on iOS but it is also available for Android devices.

The main game features over 100 levels which are split up into smaller groups. Levels use a similar setup to games such as Angry Birds where each rewards up to 3 stars based on your performance. You need to obtain a certain number of stars to unlock the next levels in order to progress.

Each level features a death-defying jump for Eddie to perform. At the start of a jump attempt you can zoom out to see the whole level to work out what Eddie needs to do. Initially this means jumping over a group of vehicles and as you get further into the game things get crazier. Shark infested water, rings of fire, canyons, rooftops and even helicopters all become obstacles to leap over.

Once you’re ready to begin the action focuses on Eddie and you need to set the revs on his bike by swiping down to turn the handlebar. After setting the revs he’ll start his attempt and there is little you can do other than watch and pray.

To get the best jump you need to land on the other end of the ramp as soon as possible to earn a score multiplier. While in the air you can also perform a variety of tricks from spins and flips to more fancy stunts such as Superman, the Whirlwind and Coffin. Depending on which you would like to perform they are done by swiping your finger on either side of the screen or in the middle. It’s important to finish your stunt in plenty of time to realign your bike with the landing ramp or you will crash.

The game tracks your personal best on each level and once you have completed one you can reattempt as many times as you like. When trying a level again you can also alter the ramp for a different takeoff. As things get more difficult you can enable power-ups in order to help Eddie out. These include a rotation stabiliser, a parachute, slow-motion, rocket and magnet. Unlocking these costs in-game coins.

Like games such as Jetpack Joyride the game features a large number of missions for you to complete. Satisfying the criteria for each missions grants you with more rewards. Another attempt to keep you playing is the inclusion of daily challenges, multi-level tours and plenty of social features such as video replay sharing to Facebook, Twitter and YouTube. It is also possible to setup your own jumps and then challenge your friends to beat your best score.

As is becoming common for free-to-play titles the game is packed with optional microtransactions. For £1.99 you can remove all adverts from the game. There are also a variety of coin packs on offer starting at £0.69 to double your coins up to £27.99 for 150,000 coins. You can also buy gambling chips and fuel.

Coins and gambling chips can be spent in the in-game shop to purchase items for Eddie. There’s a selection of bikes on offer from a moped all the way up to a top of the range stunt bike. Each bike comes with its own stats for Power, Suspension, Grip and Weight which influence how it performs. You can also purchase new outfits to wear and new stunts for Eddie to perform.

Sadly Stuntman Eddie isn’t going to hold your interest for long. In short bursts it can be quite fun but you have to spend nearly as long navigating the menus as you do playing each level. The developers are promising to fix the loading times so hopefully this improves. As it’s a free-to-play game it’s worth downloading and seeing for yourself if it’s worth your time.