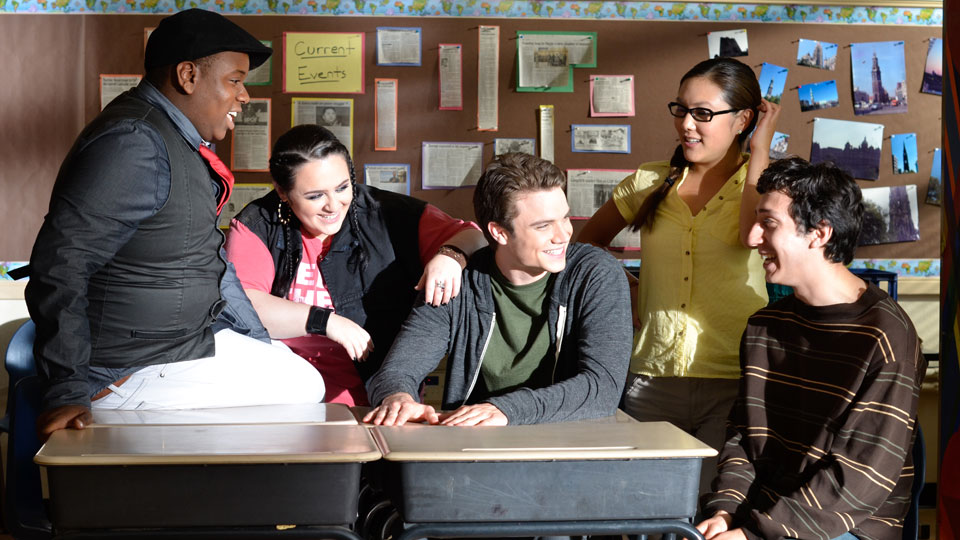 Russell (Cameron Deane Stewart) thinks he might be gay and starts a secret relationship with football jock Kevin (Justin Deeley). Unable to be open about their relationship Russell finds comfort with a group of students all experiencing their own difficulties with their sexuality. Calling themselves Geography Club, the group help each other through their sexual identity issues whilst forming close friendships. As Russell starts to come to terms with being gay he struggles to help Kevin who wants to stay firmly in the closet.

Geography Club is one of those movies that comes around once in a while and takes you by surprise. To be honest when we first heard about the movie we were mostly interested in watching it to see the wonderful Allie Gonino (The Lying Game) and rising star Alex Newell (Glee). Our expectations weren’t all that high but Geography Club is actually a sweet, realistic and wonderful little movie that is desperately needed by the youth of today.

With news of teen suicide and bullying rife in the press, it’s clear that there is a lot of work still to do when it comes to supporting gay youths. The way that Geography Club handles such a difficult topic is really admirable and we hope that it inspires schools to offer more support for their LGBT students. Russell ends up at the group by accident after mistakenly thinking that he’s being blackmailed by Min (Ally Maki) after she saw him kissing Kevin. When he turns up to meet Min he realises that she is starting a club so that other gay kids can talk through their issues and have a support system. Min and her girlfriend Terese (Nikki Blonsky) along with Ike (Alex Newell) welcome Russell into their group but all of them are afraid that the rest of the school will find out the true reason for Geography Club.

At the centre of the movie is a strong performance from Cameron Deane Stewart as Russell. He plays the role beautifully understanding the complex nature of the issues at hand and bringing them to the fore. His chemistry with gorgeous co-star Justin Deeley, who plays Kevin, is wonderful and you really root for their relationship to survive. Whether it does or not you’ll have to watch the movie of course. Deeley too puts in a great performance as the jock who is so fearful that his sexuality may come out that he does everything he can to be ‘normal’.

Around Stewart and Deeley there’s a wonderful supporting cast. Hairspray’s Nikki Blonksy, Ally Maki and Alex Newell are all superb as is Allie Gonino in a small role as vacuous popular girl Kimberly. Andrew Caldwell steals many a scene as Russell’s best-friend Gunnar who has no idea his friend is struggling with his sexuality. Instead he’s obsessed with trying to get Kimberly into bed unaware that her friend Trish (Meaghan Martin) has the hots for him. Keep your eyes peeled for a small role from Quantum Leap star Scott Bakula too!

Geography Club is a wonderful movie and one that we’ll be watching over and over again. Its stellar young cast and timely story make it a must-see film. Young kids struggling with their sexuality should get a copy of this film as it will give them the comfort that they are not alone. Perhaps if a club like this had existed when we were younger, school may have been a bit more bearable. Kudos to Edmund Entin for adapting Brent Hartinger’s story for the screen and director Gary Entin for bringing it to life. Geography Club could well have just made it onto our Top 10 films of 2013 list.