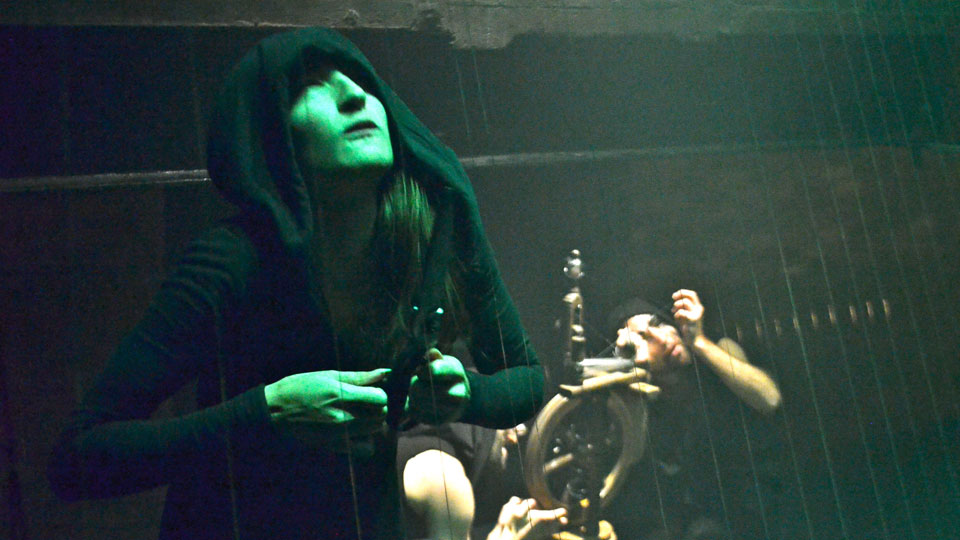 William Shakespeare’s Scottish play – a tale of bloody murder and its consequences – runs at the Arcola Theatre, Dalston in truncated form, with an added dash of Norse mythology. Macbeth of Fire and Ice is based on Shakespeare’s original text; but with only six actors and the production running to ninety minutes, it’s a shortened telling of what’s already the Bard’s shortest play which adds the names of Norse gods and further extracts the story of the three witches.

Macbeth of Fire and Ice is aesthetically impressive. A spider’s web, whilst perhaps an obvious design choice, is effectively spun out across one side of the stage. Green and red lighting are imaginatively used, and there’s spectacular use of fire and (the squeamish be warned) lots of blood. Music creates and sustains a chilling atmosphere playing throughout the action both from a pre-recorded soundtrack and Harry Napier’s inspired use of instruments from cello to unconventional percussion.

Whilst Macbeth of Fire and Ice makes a visual impact, it loses something in the storytelling department, and this is its central weakness. A large part of the reason is that it presents the edited highlights of the story and has the actors doubling or tripling up roles, so it’s not always apparent which character they’re meant to be. Thus the scene where Macduff (Alex Britton) is told that his family have been slaughtered, normally a punch in the throat, fails to resonate because the audience hasn’t, up to that point, invested much in the character. Whilst some of the performances are good, the presentation makes it difficult to become too emotionally involved in the action, leaving Molly Gromadzki’s climactic speech as Lady Macbeth, full of dramatic pauses and animal shrieks, seeming a tad over-egged. In contrast, Mark Ebulue’s Macbeth is appropriately steady and underplayed.

The storytelling is hampered further by an assumption that the audience already knows the story. Whilst this is arguably fair enough, the show opens with a staged fight between characters. At this point the audience has no idea who they are, and it doesn’t so much grab the attention as confuse. It’s perhaps the case that more attention has been invested in the aesthetics from the pyrotechnics and music than it has in telling the story. Thus it appeals to the senses but less so to the emotions. It is an original take on Macbeth, but the end result is more ice than fire, though its gutsiness is an attractive trait.

Macbeth of Fire and Ice plays in Studio 1 of the Arcola Theatre until 16th November.