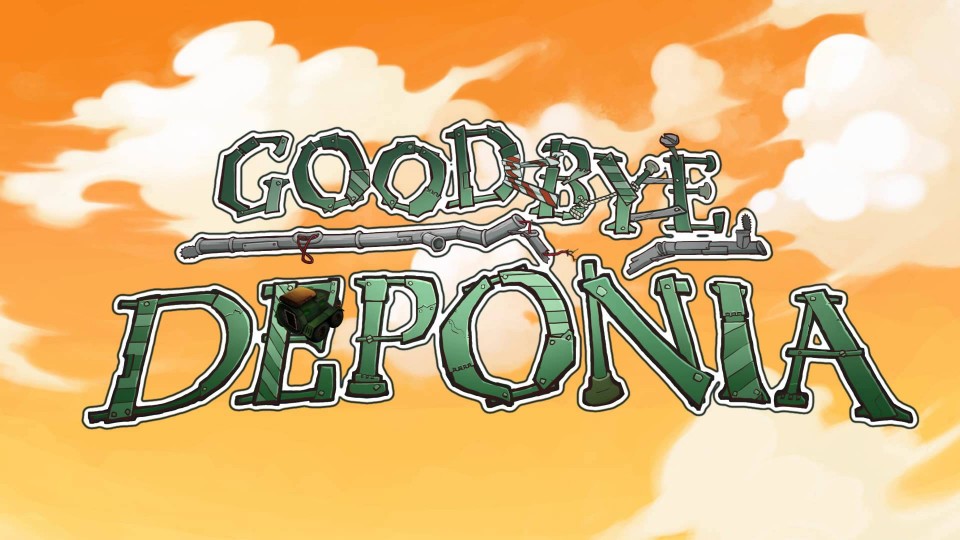 It seems that there is no stopping Daedalic Entertainment who have been pumping out high quality point-and-click adventure games over the past year. Just recently we’ve thoroughly enjoyed playing through The Night of the Rabbit and Memoria. Now it’s time for the final part of the Deponia trilogy as we take a look at Goodbye Deponia.

Goodbye Deponia can be played standalone but it makes a lot of sense to play the previous titles first if you haven’t already. The first two parts of the trilogy – Deponia and Chaos on Deponia – were released just last year. The games follow the adventures of Rufus and his attempt to escape from the junk planet of Deponia to Elysium.

Standing above Deponia, on giant stilts, is a monorail network controlled by the Organon which polices the planet. They keep an eye on the resistance and are feared by the people below. Floating high above this is the cloud city of Elysium where the upper-class population live. The game picks up after the events of Chaos on Deponia and sees Rufus and his girlfriend Goal in a race against time to prevent the destruction of Deponia.

We don’t want to say too much concerning plot so that we don’t spoil anything for players. During your adventure the game continues the series humour and constantly challenges your puzzle solving skills. The humour isn’t for everyone but fans of work by Douglas Adams and Terry Pratchett should feel right at home.

The puzzles are a mixed bag and often nonsensical. Sometimes you’ll solve one by accident and other times you’ll be stuck for hours. With no hint system we found ourselves spending a lot of time clicking on everything and trying to use all our inventory items just to progress. Getting stuck for long periods can be infuriating and can spoil the fun somewhat but there is still a sense of achievement when you complete each puzzle. As well as the puzzles there are also some mini-games to tackle but these can be skipped if desired.

As the game progresses Rufus gets to meet plenty of crazy characters, including plenty of returning faces, and if you’re into the humour there’s an entertaining time to be had. One part of the game puts you in charge of multiple characters that you can switch between which is fun and adds another layer of complexity.

Graphically the game looks fantastic with hand-painted backgrounds and wonderful cartoon characters and animation. The voice acting is also decent and often entertaining. The game is localised from the German version and many games suffer in translation. Goodbye Deponia doesn’t seem too bad here but we imagine that the game is at its funniest in the original language.

It’s not the strongest title from Daedalic but overall we rather enjoyed Goodbye Deponia and are sure that fans of the series will too. Adventure fans will be used to the bizarre puzzles which are definitely a draw for some players. Everyone else be aware if you prefer your puzzles logical or like help along the way then expect to be in for a frustrating experience. It’s the last part of the trilogy but we wouldn’t be surprised if Daedalic decide to return to the series in future.