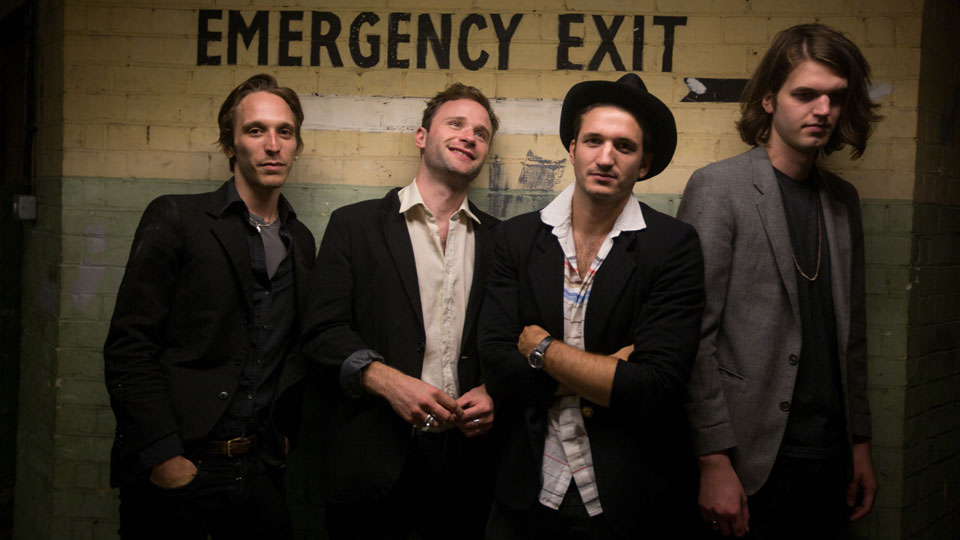 Formed in 2010 the four mates, originally from Hertfordshire, brothers Joel (vocals/bass) and Ash Hodge (drums) joined by guitarists Eliot Crabtree and John Bisset play with the brevity and spirit of punk with hints of the heady Brit pop days of Blur.

Working out of a vast, abandoned warehouse in Hackney, dubbed The Tricks HQ, they produced music with a refined rawness and a sound that walks the line between North American and British rock ‘n’ roll. Catching the attention of the American label Unison Music Group they were signed to a worldwide deal.  The support for the band led to The Tricks gaining national coverage whilst gigging extensively around the UK.

The Tricks will celebrate the release of their new EP with a special gig at Hoxton Square Bar & Kitchen on October 30th. When it comes to The Tricks’ live shows their reputation precedes them and they promise an electrifying and energising set for which they are renowned.

We chat to lead-singer Joe Hodge, to find out a bit more about the band.

Hi guys, can you tell us a bit about yourselves and how you formed as a band?

We are The Tricks.  John Bisset and Eliot Crabtree share guitar duties, Ash and I share DNA (the Hodge brothers) and play drums and bass respectively. All four of us sing, although I sing the loudest and therefore I am the lead singer. We’ve known each other since we were wee whippersnappers and played in bands both together and separately throughout our teenage years.  Then around three or four years ago, Eliot and John moved into a huge warehouse in Hackney.  That was the birthing pool for The Tricks.

Can you tell us about what bands or musicians inspired you to want to be in a band yourselves?

Part of the reason we can endure spending so or maybe too much time together is that we share similar tastes in music, films, TV and fast foods. We all love The Strokes, The Clash, Blur, Elvis Costello to name but a few and these were the bands that were initial influences on The Tricks’ sound. Having said that, we do each have quite diverse individual tastes too so this furthers the scope of our music, for example El loves Television, Johnny loves Hans Zimmer, Ash loves Neil Diamond (well, we pretend he does) and I love a bit of Springsteen.

How would you describe your sound to those who have not yet heard your music?

I would describe it as ‘good’. Haha. We have vocal melodies that get stuck in your brain, intertwining guitar harmonies, chugging, deep bass riffs and pounding and driving drums.

Your new EP is called In The Doghouse, in what way is it different from your debut EP and what can we expect from it?

In The Doghouse has two of our favourite songs on it; Better and The Dead of Night. They are fresh songs that we recorded in January of this year and they have a vigour and urgency to them which makes them really exciting to play live. We released the 49 Mercury EP in November of last year and it comprises four songs that we still love to play at our shows: 49 Mercury, Not Too Young, Part Time Lover and On Trial. I guess there is a development from 49 Mercury to In The Doghouse and that quite simply comes from the furthering of our songwriting skills and the continuing improvement of our musicianship.

What has been the reaction to your new EP, so far?

We’ve had a really great reaction so far. We have been on two UK tours this year and ‘Better’ and ‘The Dead of Night’ have always gone down so well with the audiences, we just hope that everyone enjoys listening to the recorded versions.

What do you like the best – making and recording your songs, or being on-stage and performing?

This is a difficult question because we love both! The recording of a song is more methodical therefore the enjoyment stems from listening to a track develop and take shape from a tiny idea or guitar riff to a fully formed song. The enjoyment of performing live is more visceral and is essentially an adrenalin rush. But I suppose if you are a musician both are as important as one another and you should savour every element of what you do creatively.

What was it like recording in the studio at Unison Music Studios in Los Angeles with Grammy nominated producers Bruce Witkin & Ryan Dorn?

Bruce and Ryan are the bees’ knees. We love them. We were many miles from home when we recorded with them in Los Angeles, but it never felt like it because they embraced us into their family.

The recording process itself was in equal measure challenging, exhilarating, exhausting and rewarding. Plus we played a lot of table tennis in our tea break, we could challenge anyone at Ping Pong now.

In The Doghouse precedes your debut album, which is due for release in early 2014, what sort of sound or feel are you aiming to achieve with the album?

The album will contain all the different sides to our music, the positive, fun tracks, the darker, edgier tracks and span from up-tempo punky songs to slower, quieter, more reflective songs. We can’t wait for people to hear it.

What do you hope to achieve with your debut album?

That it does well enough so that we can record another one! This industry is a tough nut to crack and nothing is ever certain, we just want to have the opportunity to continue creating, recording and releasing music. A number 1 would be nice though, wouldn’t it?

What is your biggest ambition, as a band?

At this stage, I think our biggest ambition would be to play Glastonbury. Imagine that? I’m sure when every rock n roll band start out they set their sights on Glasto, it’s got history and gravitas. Plus it’s a great place to get wasted with your mates.

The Tricks’ new EP In The Doghouse is available now and the band will play Hoxton Bar & Kitchen tomorrow night.

In this article:Hoxton Bar & Kitchen, In the Doghouse, The Tricks