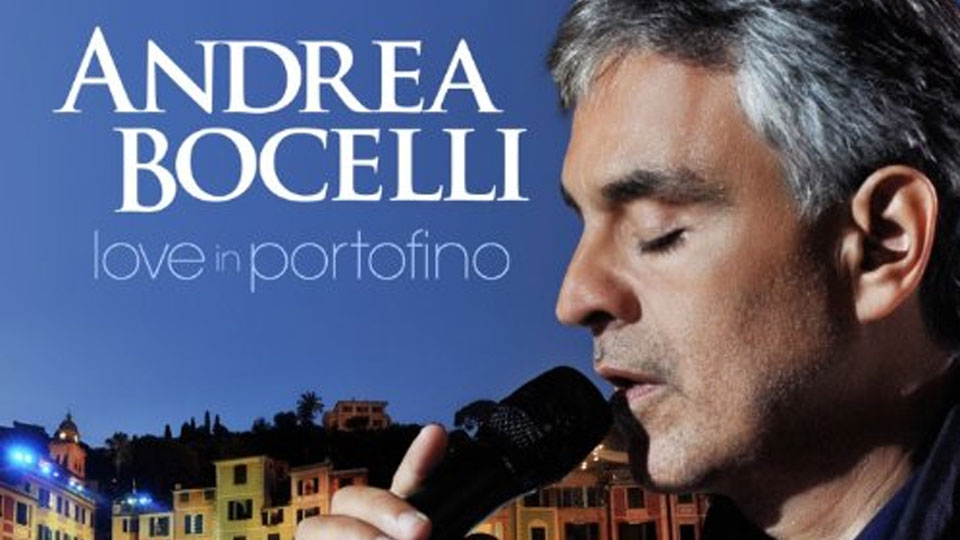 Andrea Bocelli’s latest album, Love in Portofino, assembles many hits previously released on his album Passione with bonus tracks from a live performance in Portofino. Check the tracklist before you buy if you already own Passione, as much of it isn’t new.

Love in Portofino sees Bocelli show off his linguistic as well as his vocal range, since, taking inspiration from around the world, he sings in his native Italian as well as Spanish, Portuguese, English and French. There are a number of duets on the album with notable guest vocalists, and he combines his staple mellow classical melancholy with some upbeat numbers and surprising standards, even covering Elvis Presley.

Bocelli kicks off with a bossa nova beat in the title track Love in Portofino. It’s a good gauge of what it to come since it showcases Bocelli’s extraordinary vocal skills but also – a factor that raises him above the vast majority of his peers – the vibrato he achieves which is the quality that emotionally moves his audience, even when they’ve no idea what he’s singing about. He’s also joined, as he is throughout the album, by an orchestra that brings first-rate musicianship and provides Bocelli with the background sound to accentuate his beautiful vocals.

Showing that he can branch out into the standards, Bocelli has a go at When I Fall in Love, originally popularised by Doris Day, though his version owes more to Nat King Cole’s. The timeless song features Chris Botti on trumpet. From the same era is Elvis Presley’s Love Me Tender. Bocelli takes it at a slow pace – a wise move since he’ll never out-Elvis Elvis, but as incongruous as it may sound, it’s proof of the adaptability of Bocelli’s voice that will always belong to the classical that he can pull this off.

La Vie En Rose is another classic modern song, and as much as Love Me Tender will always be indelibly identified with Elvis Presley, La Vie En Rose instantly recalls the warbling of tragic French songstress Edith Piaf. Bocelli rolls his ‘r’s and sustains an arresting version that remains truthful to the original, to the extent of the haunting tones of Piaf’s original recording feeding in part way through the track.

A further indication that with Love in Portofino Bocelli is branching out from his classical roots is his duet with big-bottomed Latino diva Jennifer Lopez on the track Quizas quizas quizas. Perhaps appropriately, it’s the sexiest track on the album (although the slower-paced Las Hojas Muertas runs it a close second), starting with sultry violin which leads into a smouldering Latin beat and a conversational duologue between the artists.

More conservative Bocelli fans may favour Champán by Domenico Di Francia, which is decent but unremarkable. Much more successful is Era già tutto previsto, one of the bonus live tracks, which is a better-constructed song that slowly builds to a climax in which Bocelli lets rip with the full force of his voice. The result is exhilarating. The bonus tracks may swing it for the undecided who have already purchased the studio tracks on Passione. It also features Qualche Stupido – better known as Somethin’ Stupid, popularised by Frank and Nancy Sinatra. For this one Bocelli duets with Veronica Berti. Tristeza goes provides another foot-tapping Latin beat, though it somehow falls short of bursting into life. The final track, Roma Nun Fa’ La Stupida Stasera (which translates as Rome, Don’t Fool Me Tonight) is a slow-paced piece and another modern classic that Bocelli makes his own.

In the DVD Bocelli, performing outdoors, is accompanied by an orchestra and his long-time songwriter and musical arranger David Foster on piano. It’s an appreciative audience that includes a few big name stars – Michael Caine being one! For a live recording, the sound quality is surprisingly good, picking up the subtleties of the orchestra whilst for the most part minimising the surrounding noise.

With Love in Portofino Bocelli proves that his extraordinary voice is equally at home in a range of genres. The album will resonate with his fan base thanks to his distinctive appeal. There are some safe and unremarkable tracks, but enough standouts to make Love in Portofino a rewarding listen.

In this article:Andrea Bocelli, Decca, Decca Records, Love in Portofino