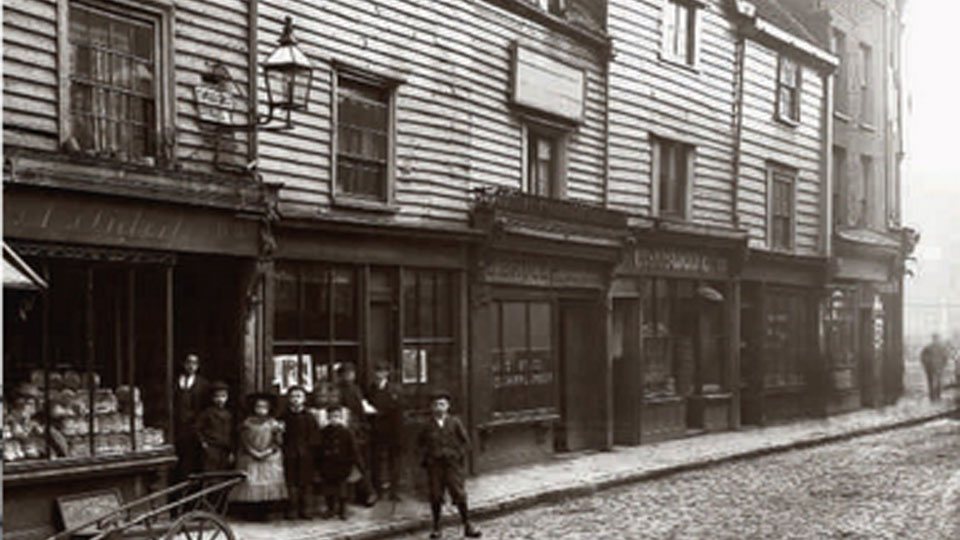 English Heritage’s Images of Lost London is a 144-page book printed on high-quality glossy paper, with high resolution black and white photographs. It is a truncated reissue of an earlier version of the book (released in 2009), and is presented here in paperback.

Images of Lost London is a testament to the immortality the photographic image bestows on its subjects. These pages introduce readers to the streets and buildings of England’s capital city as seen through the eyes of their ancestors. It is a haunting, fascinating book in which the eerily familiar and the disconcertingly alien collide.

The book reinforces the idea that no city is static. Like a living organism, it is constantly changing and in flux, as old parts die away and are replaced by the new. The appeal of photography is that it captures a single moment in time and pickles it forevermore. The biggest regret is that photography wasn’t invented earlier than the mid-nineteenth century. Imagine if we had contemporary images of the Great Fire of London or the construction of St Paul’s Cathedral as well as paintings, written accounts and archaeological evidence?

Several events changed the landscape of London more profoundly than the mere gradual change induced by entropy and increasing population. The Great Fire of London of 1666 tore through houses of wood and clay, spreading rapidly owing to the combustible nature of the building materials. Mostly only stone structures survived. Yet within the pages of this book you will see buildings that did survive the fire, with wooden gables, jutting awkwardly out into the street at wonky angles; and a dilapidated coaching inn, the Oxford Arms, nestled behind St Paul’s Cathedral, though it hasn’t existed for a century and a half since it was demolished in 1878…

The other devastating event, still vivid in the memories of older generations, is the Blitz during WWII, and the devastation enemy action wrought in the early 1940s. The final pages of the book are devoted to images of bombed out churches and public buildings, yet elsewhere in the pages you’ll see treasures captured in silver nitrate before their destruction in the mid-Twentieth Century.

Inarguably, many further architectural treasures succumbed to the callous bulldozers of the philistine 1960s, where a break with the past was the over-riding sentiment, rather than the impulse to treasure buildings of historical significance. Take a look at the neo-classical arch that stood outside Euston Station, or at Christopher Wren’s Christ’s Hospital, or Smirke’s General Post Office and say that their demolition wasn’t an act of government-sanctioned vandalism.

Not all of the changes documented by this book are for the worse. The sobering reality of the grinding poverty of the working classes during the height of the British Empire is revealed in stark reality by some of the images depicting cramped housing, almost universally missing glass in the windows. Looking at Aldgate and Mile End, it’s easy to see how disease was rampant and rapidly spread, at a time when epidemics were common and infant mortality staggeringly high.

The great novelist with a social conscience, Charles Dickens, has some significance in the pages. Not the alleged site of the Old Curiosity Shop (swiftly debunked by author Philip Davies) but in the tiny garret bedroom that was the inspiration for Little Dorrit’s birthplace. The house is now, of course, long gone, but the photograph exists and is a reminder of the grinding poverty that was prevalent throughout much of the capital, at a time when the average life expectancy was barely 40. You can also see the Old Bell Tavern, pictured in 1897, in which Dickens and Thackeray were regulars.

You’ll see the familiar too, but not as you expect it. Regent Street before its facelift; Shad Thames as a working dock, rather than a scrubbed-up tourist trap full of trendy overpriced wine bars; Oxford Circus crammed with traffic – nothing unusual there until you consider that it’s horse-drawn carriages on cobbled roads competing with new-fangled motor vehicles. There’s the newly-completed Admiralty Arch and the in-progress Tower Bridge: reminders that buildings, landmarks and monuments are only ever temporary and not as permanent as they seem during our fleeting lives.

An index of contemporary images of familiar streets with photographs taken from (wherever possible) similar angles to the originals would help the internal mental struggle of trying to make sense of the places that retain echoes of familiarity and is one thing lacking in the book. Further details on the date of the destruction of some of the buildings would also have been welcome, though possibly this information is unrecoverable now.

Everywhere you walk in London you’re stepping over the ghosts of your ancestors. That’s true of towns too, but the city of London has undergone more change than most in its two-thousand year history. You can still walk the streets and bump into the Roman wall, or witness the medieval splendour of the Tower of London: but it’s not until you look into the archives with a fascinating book such as this that you realise how much of what was once London is gone forever. It will, of course, be the same for our descendants.

English Heritage has done a great job of presenting a vivid visual narrative of the lost history of London. There’s the right amount of explanatory text that’s heightens the pleasure of the captivating images. It’s the kind of book you become lost in. If it encourages more people to look up above street level at the architectural treasures around them, as buildings from different epochs neighbour one another; and take an interest in ensuring our shared history is preserved and honoured, then it can only be a good thing. This book should achieve precisely that.