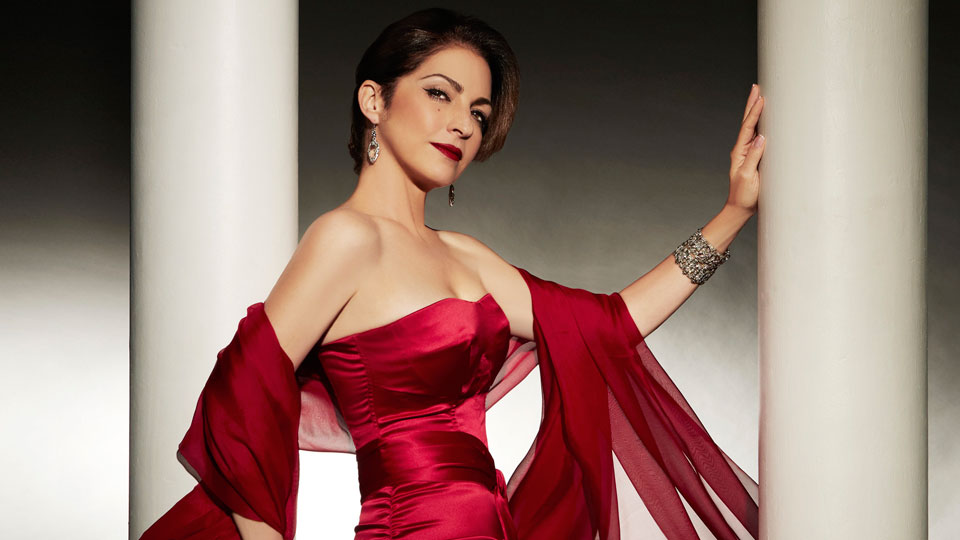 Gloria Estefan is in the midst of promoting her new album The Standards which sees the Latin superstar covering songs from the Great American Songbook in a collaboration with her friend and revered musician Shelly Berg. Whilst some may see the album as a departure from Estefan’s usual sound, she explains these are the songs she grew up on that inspired her own music. Last night she showcased the album during a one-off performance at the Royal Albert Hall in London.

From the moment we walked into the Royal Albert Hall we could tell the evening was going to be a classy affair. During our interview with Estefan earlier in the year, we knew that the main focus for the show was going to be selections from The Standards but she assured us there would be surprises along the way and she was absolutely right. Around 7.30pm Estefan arrived on the stage backed by Shelly Berg and an orchestra he had put together for the evening’s performance. The audience went wild giving her standing ovation and deafening applause before she sung a single note.

Looking stunning in a red dress, Estefan opened the show with Good Morning Heartache. She continued with more selections from The Standards performing They Can’t Take That Away From Me and the Brazilian song Eu Sei Que Vou Te Amar before performing a classic of her own Here We Are. The audience went wild as Estefan sang from her heart with a big smile on her face.

Over the course of the set, which was split into two with an interval in the middle, there were some truly special moments. When Estefan sang I’ve Grown Accustomed to His Face she wiped away a few tears after telling the audience she thinks of her husband when she sings the song as they have been together for nearly 40 years. The Day You Say You Love Me was another emotional moment as Estefan explained it was her wedding song and held a special place in her heart. During her performance of Smile, Estefan sang in English, Spanish and Italian switching between the three languages with ease. Rhythm is Gonna Get You closed the first part of the set leaving the audience buzzing for the second half.

The second part of the set contained more of Estefan’s classics with new arrangements. Bad Boy and 1-2-3 got the audience on their feet and dancing whilst ballads Can’t Stay Away From You, Don’t Wanna Lose You and Anything For You sent shivers down our spine. Coming Out of The Dark, Estefan’s first single after her near-fatal bus crash in 1990, was given one of many standing ovations over the course of the evening.

From The Standards the highlights in the second half of the set included the moody How Long Has This Been Going On and What a Wonderful World. Estefan’s interpretations of both songs is refreshing and she puts her own stamp on them.

Throughout the performance Estefan interacted with her fans. She was signing autographs whilst singing, shaking hands with fans and embracing fans at the sides of the stage. Between songs she shared anecdotes about her career, her music and her love for her fans. She’s as down to earth now as she’s ever been despite being one of the biggest musical stars in the world.

For her encore, Estefan performed Young at Heart from The Standards before getting everyone back on their feet for a superb rendition of Conga. That song is as infectious and fantastic as it was when first released in 1985. As the song came to a close and Estefan left the stage, the audience went crazy cheering, clapping and screaming their appreciation.

Gloria Estefan’s Royal Albert Hall show was something incredibly special. Not only was it a celebration of her new album The Standards, it was also a celebration of one of the world’s best-loved and most influential artists. Estefan sounded absolutely stunning for the surprisingly lengthy performance and it was magic being a part of it. She may have been in the business for over 36 years but she’s still showing the younger stars how it’s done. Classy, emotive and stunning Gloria Estefan remains in a league of her own and last night was truly special.