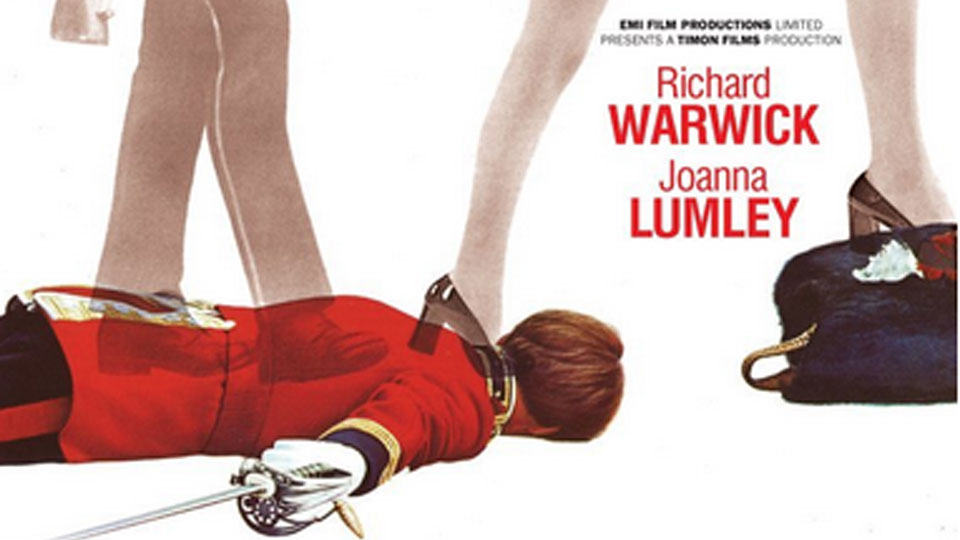 Released as part of Network Distributing’s The British Film Collection, The Breaking of Bumbo is a 1970 movie about an officer in the Grenadier Guards who, persuaded by a group of hippy pacifists, encourages the soldiers in his command to lay down their arms.

The film stars Joanna Lumley as Susie, a self-absorbed rich girl who feels more at home amongst student anarchists. Lumley had made a brief appearance in the James Bond movie On Her Majesty’s Secret Service, but this was her first substantial film role. Always eminently watchable and dazzling, she is the best thing about the movie by a mile.

The Breaking of Bumbo is difficult to categorise. Is it meant to be a satire about the conformity of army life? The Good Soldier Schweik it certainly isn’t. There are one or two witty lines about the nature of soldiers and armed conflict, but most of the time the humour is leaden; and the portrayal of the British Army as led by a bunch of toffee-nosed incompetents, whilst probably still partially true even as late as 1970, doesn’t even begin to be a clever parody.

The plot lumbers along and sees Bumbo impressed by a display of vandalism by the pacifist anarchists led by John Bird (the shorter one out of Bremner, Bird and Fortune). Once he realises bedding Lumley is part of the bargain, Bumbo jacks in his allegiance to the military and sets about impressing his new friends with an attempt to bring down the British Army from within. The whole thing builds towards an awkwardly filmed stand-off between the Grenadiers and a bunch of skinheads, with the pacifists caught in between.

The film isn’t entirely without merit. Besides the radiant Lumley there are one or two other decent performances. Donald Pickering is suitably sour and po-faced as Bumbo’s supercilious superior, and dependable character actors Derek Newark and Warren Clarke demonstrate their abilities to craft characters you care about.

The lead role of Bumbo is played by the late Richard Warwick, who is adequate, but nothing to write home about. He’s better served playing second fiddle, as he memorably did to Malcolm McDowell in Lindsay Anderson’s masterpiece ‘if….’ Here, he’s a touch lightweight, and the film may perhaps be more involving if Tom Courtenay had played the lead. John Bird’s performance is peculiar, to say the least. The accent he’s going for remains a mystery even by the end.

In all, The Breaking of Bumbo is a flat and muddled mess. Where it tries to make any serious points (the rights and wrongs of student protests), it fails; and where it aims for comedy or satire (the British Army is run by upper class twits) it’s either wide of the mark or painfully obvious. At ninety minutes, it’s relatively short, but there’s barely enough plot to stretch to an hour, resulting in plenty of filler scenes that add nothing to the story, such as Bumbo being thrown into a lake.

There are some attractive London locations, particularly the army barracks in Westminster; and the fashions lend it a certain nostalgia quality. However, the end result doesn’t stand up to scrutiny, nor fare favourably against other films of the same era that made the same point, but with their teeth in.