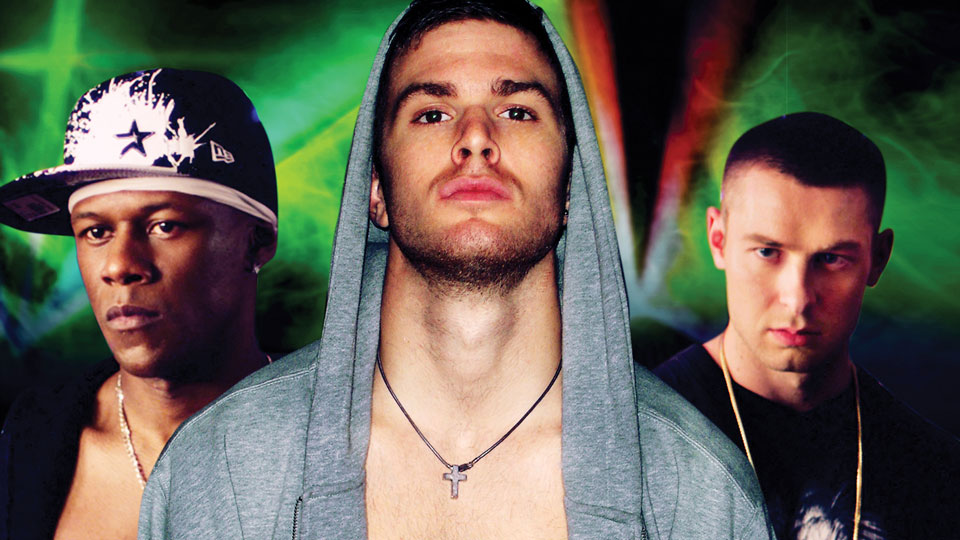 JJ (Joel Dommett) is a white rapper who enters a local MCing competition. After a tense exchange with the competition, a group call The Ilford Illmanics, JJ gets into an onstage rap battle with them after they find out he’s gay. When JJ humiliates the group, they find his boyfriend Orlando (Marcus Kai) backstage and beat him to within an inch of his life. After being put in prison for the crime, the four men that make up group must come to terms with what they’ve done, whilst on the outside JJ is trying to cope with his now severely brain-damaged boyfriend.

Bashment is the first new film from Rikki Beadle Blair since 2010’s Fit. As is the case with all his work, Bashment aims to give social commentary on race and sexuality, and how the two can create problems that escalate into violence. Bringing to mind a British version of Eminem’s smash 8 Mile, Bashment opens with music and rapping as JJ does battle on stage with The Ilford Illmanics. We felt a little sorry for Joel Dommett who plays JJ as his rapping is cringey and his styling even worse. There are some clunky exchanges too about race between JJ and his rivals that just seemed plain bizarre.

Running concurrently with the main storyline is a sub-plot involving shop worker Karisma (Jennifer Daley) who witnesses KKK (Nathan Clough), one of The Illford Illmanics, assault a customer in the shop she works. This storyline then feeds into the rest of the film as Karisma builds a relationshop with KKK whilst he’s in prison whilst Daniel (Michael Lindall) the man who was assaulted turns out to be a lawyer who involved with the imprisonment of the rappers.

Bashment really does capture the impact that homophobic assault has on the lives of those involved. It’s heartbreaking to see JJ looking after Orlando who is now a child-like dependent who has only occasional moments of lucidity. Joel Dommett’s performance is really strong and you can forgive his rather shoddy rapping because of it.

What lets Bashment down is the ending of the movie. Without giving too much away we felt that Blair moved the story from realistic to unbelievable thus losing us a little at the end. Not every story needs to have a happy ending and Bashment’s feels forced. The way the characters evolve is unbelievable and the last 20 minutes are really disappointing.

Despite the end Bashment has much to say. It’s fair to say that some of it feels a little preachy in places but overall the message and intention is good. If you’ve seen Rikki Beadle Blair’s previous work then you’ll be familiar with his writing and style. With a little more focus, a little less preaching and a more believable end Bashment could have been a great film rather than simply a good one.