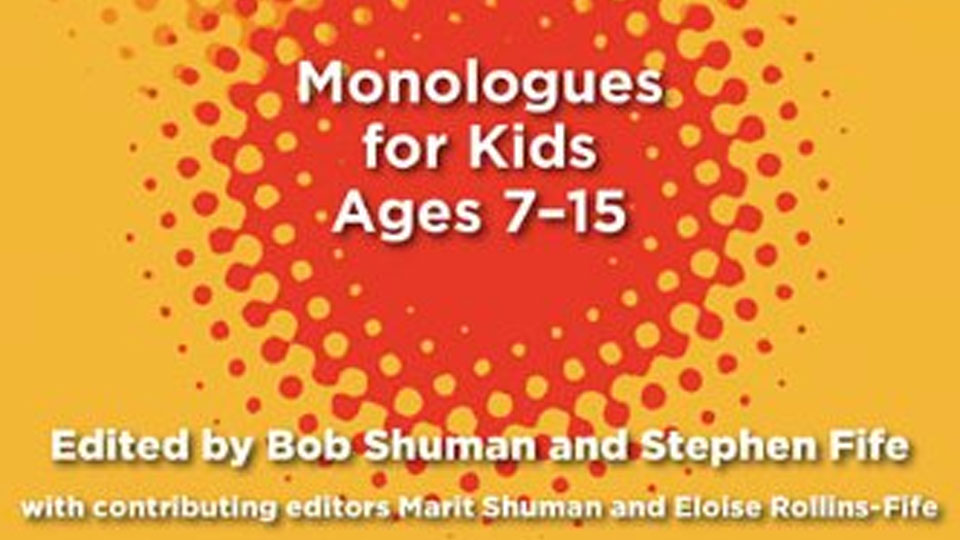 Shuman & Fife – One on One Playing with a Purpose review

One on One: Playing with a Purpose is a compilation of monologues for young actors from ages 7-15. It’s split into two main sections, sensibly keeping the female and male monologues apart.

The chosen speeches themselves offer a good variety from historic to modern plays with some literature thrown in: the boys’ opens with lines from Mark Twain’s The Adventures of Huckleberry Finn where the protagonist recalls the great speech from Hamlet from memory- mutating it to comic effect.

There are forty-two speeches for girls to choose from, and thirty-seven for boys. Within the selection, the monologues vary in length and complexity, and should cater for all styles and abilities. There’s a necessary variety of tone too, since there’s a big difference between a seven year-old and a fifteen-year old that belies the handful of years separating them.

Each monologue comes with a brief introduction that sets the scene and establishes the character. It’s also worth keeping an eye on the contents pages, as there it is made explicit whether the speech is serious, comic or a mixture of the two; the playing range for the actor, and any relevant ethnic origin of the character.

The editors include their own work without allowing their contributions to dominate the book: though a good example of its range is the transition from the Fife’s monologue Amy’s Super-Amazing Incredible Makeover to one of Sophocles’ speeches for Antigone. The Ancient Greek classics are given a fresh spin by inclusion of Craig Wright’s all-female adaptation of the Iliad, with a speech for a female Achilles.

The star system of rating books is irrelevant for this tome, since it’s only of interest to young actors and not remotely of interest to a casual reader: however for those just starting out in the industry, One on One will prove an invaluable resource both for honing the craft of acting and for preparing for auditions.

The book is aesthetically pleasing, printed on clean crisp paper with an elegant typeface. Such seeming trivialities aren’t to be underestimated when pages will be stared at, read and reread for hours at a time.

There are one or two aspects of the book to be less certain about. There are a few duologues included, which requires another actor to feed in lines, which seems an odd inclusion given the wealth of monologues available (a section from Tom Stoppard’s Arcadia is one such addition). There’s also a section at the back of student monologues, which, whilst not without merit, aren’t as well-structured as those in the main section and will probably be of less help to serious actors.

Students of the typical audition structure (one classic and one modern monologue) will find a good range to satisfy both requirements in this tome. It will also introduce them to a wide scope of great dramatic writing, especially since it’s always a good idea to know the full play of any monologue you’re performing to really understand it.

Any young actor will find One on One an invaluable resource and an essential book to have in their collection to prepare for those all-important auditions.

Discovering performance talent in the North