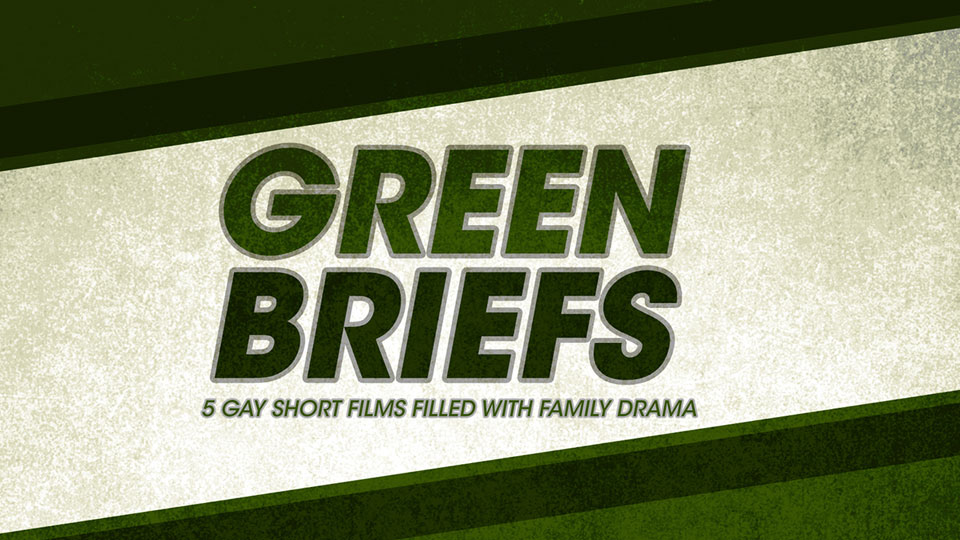 Guest House Films has announced the that Green Briefs, the latest instalment in the popular gay-themed short film series, will be released this winter.

Following the release of Black Briefs and Blue Briefs, Green Briefs features a collection of diverse shorts about individuals and couples who are struggling with the meaning of family. There are five shorts featured on the release:

Pride – Directed by Marc Saltarelli (22 minutes)
After being disowned by his homophobic father 20 years before, a young man is now forced to take him in as he suffers from Alzheimer’s. Can he forgive his father for his past actions when his father doesn’t even remember them? Winner – Best Screenplay, Hollywood Reel Independent Film Festival; Winner – Audience Award, Long Island Gay and Lesbian Film Festival; Nominee – Iris Prize

Shabbat Dinner – Directed by Michael Morgenstern (14 minutes)
Friday night Shabbat dinner is boring as usual for William Shore. His mother shows off for their guests, his father has too much to drink, and he gets stuck entertaining fellow teenager Virgo, with whom he has nothing in common – at least, until he discovers that they both share a very important secret. Official Selection – Frameline, NewFest; Winner – Best Gay Film, Out in the Desert Film Festival, Tucson, Arizona

Kimchi Fried Dumplings – Directed by Jason Karman (14 minutes)
When Carl comes home with his new boyfriend for Christmas after years of being away from his family, he faces the resentment of his younger gay brother Adam, who has been left to care for their aging parents during Carl’s absence. Official Selection – Frameline, Outfest Fusion, Vancouver Queer Film Festival, Los Angeles Asian Pacific Film Festival

“Gay men always have their fair share of family drama, from coming out to their parents to choosing to become parents themselves,” said Guest House Films co-founder Rob Williams. “The short films selected for Green Briefs come from a diverse group of filmmakers and represent a wide range of family-related issues that everyone can understand.”

The release date for Green Briefs is due to announced very soon and it can be pre-ordered at www.guesthousefilms.com/store