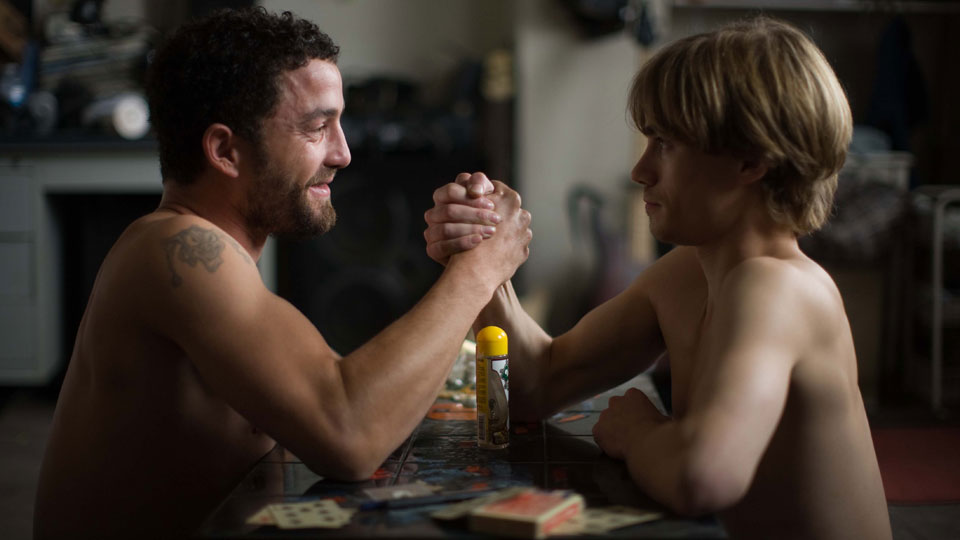 Pianist Paulo (Matila Malliarakis) goes for drinks with friends and meets bartender Illir (Guillaume Gouix). At the end of the evening a very drunken Paulo is taken home by Illir after a bit of flirting but nothing sexual happens between them. The two men are attracted to one another but Paulo is currently in a relationship with Anka (Melissa Desormeaux Poulin) who he lives with. Paulo starts an affair with Illir and their relationship quickly becomes intense but without realising it they both want very different things from their fling.

Beyond The Walls immediately brings to mind Ira Sachs’ superb drama Keep The Lights On. Very similar in plot and feel, David Lambert’s story (which he also directs) explores a relationship where two people are drawn together by lust but incompatible in terms of their wants and desires. Once Paulo is kicked out of his home with Anka he becomes almost obsessional about moving in with Illir and escalating their relationship. For Illir he thought he was having a bit of fun, and whilst he’s clearly attracted to Paulo, wasn’t really prepared to have a live-in boyfriend.

Whilst the affair starts off promisingly enough, it of course soon starts to break down and the cracks really begin to show. A plot twist involving Illir being imprisoned for drug possession begins to break down the relationship as Paulo is forced to cope in the real world on his own. This leads his to drift around revisiting his past but also trying to find a way to numb his pain which he finds in S&M.

The strongest aspect of the film is the two central performances. Matila Malliarakis perfectly embodies Paulo bringing out his forceful desperation and hidden despair. He forms a great chemistry with Guillaume Gouix who plays Illir and the two men make a great on-screen couple. Gouix on the other hand is a little more aloof as Illir but he definitely brings out the character’s darker side in the second half of the film.

Beyond The Walls is a decent drama that will hold your attention. We didn’t feel it had quite the depth of Keep The Lights On but the performances will ensure you watch it through to the end. The main issue we had with the film is that there wasn’t much in the way of surprise and you start out with a feeling that the relationship isn’t going to pan out in a positive way. Still the film is worthy of your time and we’ll be keeping an eye out for Lambert’s future work.