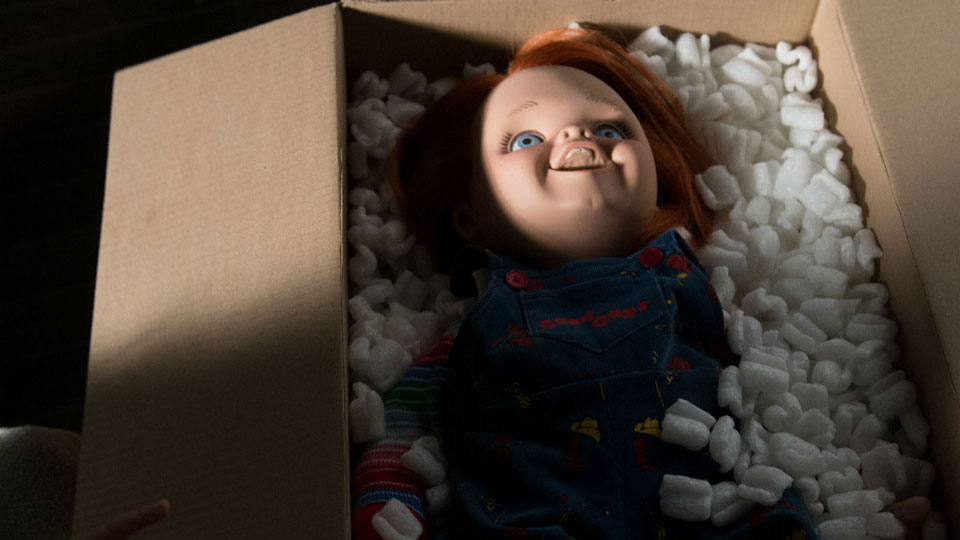 Wheelchair bound Nica (Fiona Dourif) is perplexed when a Good Guy doll is delivered to the house she shares with her mother. Within hours of the doll being in the house her mother seemingly commits suicide leaving Nica in shock. She is soon surrounded by family after the suicide of her mother when her Sister Barb (Danielle Bisutti) arrives with her husband Ian (Brennan Elliott), daughter Alice (Summer Howell), au pair Jill (Maitland McConnell) and priest Father Frank (A Martinez). As Nica and Barb clash over what to do with their mother’s house, the family starts to suspect something strange is going on when the doll keeps going missing. Can Chucky really be back to cause havoc once again?

It’s been 9 years since the last instalment of Child’s Play. Seed of Chucky was released I 2004 and continued the comedic direction of 1998 instalment Bride of Chucky. The self-referential, post-modern film was a box office disappointment and divided critics and fans. In the years since there has been much talk of a remake of the original 1988 movie but earlier this year it was announced a sixth instalment was in production and would be released direct to Blu-ray and DVD. Thankfully Curse of Chucky is getting its first lease of life via selected screenings and made its European premiere tonight as part of Film4 FrightFest’s opening night.

With series creator Don Mancini at the helm (he both wrote and directed this instalment), we were promised that the film would revisit its horror roots with Bride of Chucky and Seed of Chucky being largely ignored. The film is a continuation of Child’s Play 3 and in part acts as a reboot for the franchise. Thankfully Mancini has stuck to his word and in Curse of Chucky he has delivered a genuinely scary movie with plenty of humour that captures the essence of the original movie.

Curse of Chucky concentrates more on building suspense and tension than it does shocking you with gratuitous violence. That’s not to say there aren’t plenty of great kills though so long-time fans of the series will be happy. The pace of the familiar recalls the original Child’s Play film with plenty of hints that Chucky is about to continue his murderous spree without giving the game away too early on.

There are plenty of nods to Child’s Play’s history throughout the movie and there are a couple of scenes, one of which takes place after the credits, that reward long-time fans of the series. It also sets the scene for another movie which we desperately hope Mancini already has up his sleeve. We don’t want to say too much as the surprise is a real treat.

In the centre of Curse of Chucky is wheelchair-bound Nica, played by Brad Dourif’s real life daughter Fiona. Over the course of the movie, Fiona more than proves her worth as an actress and gives us a character to root for, something the films haven’t really had since Child’s Play 2 when Alex Vincent played Andy Barclay for the second and final time. What’s even more attention-grabbing is the fact that the central heroine is in a wheelchair meaning her actions and movements have to be smarter. Fiona does a wonderful job and she really does emerge as the star of the movie.

Of course Brad Dourif steals the show bringing Chucky back to life once again. His throwaway lines, many of which are as funny as they are menacing, are fantastic and reinforces why Chucky has become a real horror icon.

Danielle Bisutti is the other standout in the cast as bitchy Barb. She spends the first part of the movie throwing glances at her husband who is clearly besotted with the au pair. Bisutti throws herself into the role relishing every bitchy line and put down her character utters. We were also impressed by Summer Howell who plays Barb and Ian’s daughter Alice. She works with the Chucky doll really well and her character is believable.

Curse of Chucky is the return to form that we’ve all been hoping for. We’ve had to wait a long time for the return of Chucky and Mancini has not disappointed. Curse of Chucky is, dare we say, the best instalment in the series since the original movie. It mixes thrills, chills and plenty of humour for a satisfying horror movie that will live up to repeat viewings. Chucky is back in a big way and we just hope that we don’t have to wait another 9 years for another movie.