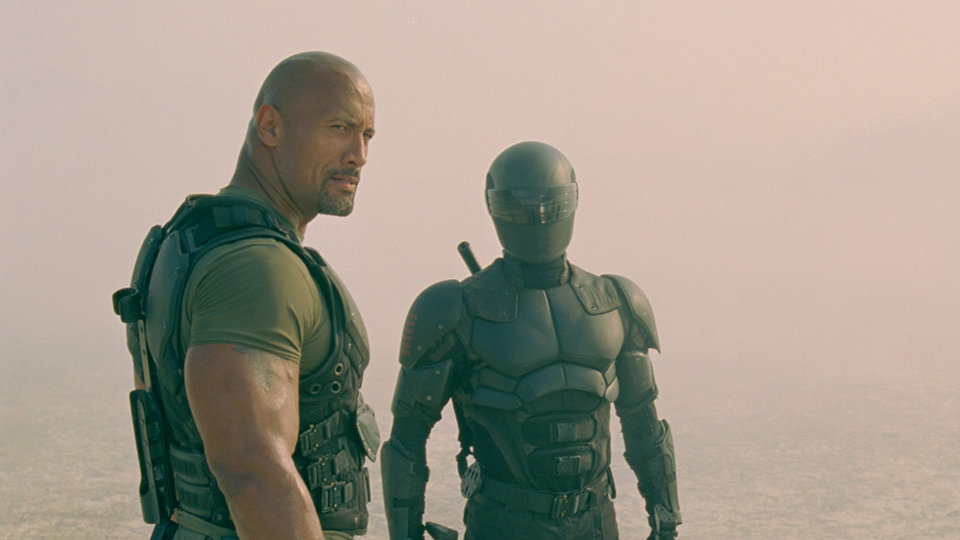 When the G.I Joes are ambushed and framed for the theft of a nuclear warhead, it’s left to the surviving members to reunite and make a stand. With an imposter in the White House, it’s up to Roadblock (Dwayne Johnson – Fast Five), Lady Jaye (Adrianne Palicki – Red Dawn), Flint (D.J. Controna – Dear John) and Snake Eyes (Ray Park – Star Wars: The Phantom Menace) to save the day – but not without some help from a legendary ex-General named Joe Colton (Bruce Willis – Die Hard).

G.I. Joe: Retaliation finally arrives after a year’s delay and some hasty re-shoots. With 3D thrown into the mix, you’d be forgiven for thinking Retaliation would end up as an unwatchable mess but this actually comes out as a mildly enjoyable piece of fluff. With Jon Chu at the helm, the focus has shifted to a more action-heavy story that finds the Joes up against some stiff odds.

Dwayne Johnson yet again steps into an established franchise and does what he can to drive this into new territories. He is always watchable and is easily the best thing in the movie. His character leads the line well and handles the demands of the franchise with suitable poise. He is also given a helping hand by Bruce Willis, who proves once again that he’ll appear in anything if the price is right. But having said that, Willis does add an element of cool wherever he goes and his appearance does help Retaliation out a great deal.

Channing Tatum is in the movie at the start and his scenes, especially with Dwayne Johnson, are very good. Duke should have been in Retaliation all the way through but a very questionable omission from this film means that the audience never really gets to revel in their chemistry. It’s true that Tatum has bigger fish to fry these days but I would have loved to have seen him in this for longer, and his absence is certainly felt as the movie trundles on.

Snake Eyes and Storm Shadow are most people’s favourite characters and once again they go at it pull pelt. It’s a very good martial arts sequence, with Ray Park and Byung-hun Lee delivering on every front. Lee’s character is also impressively dealt with this time around. There’s more to him than just being a bad guy and Storm Shadow’s reluctance to pick a side makes for some interesting sequences fighting alongside the Joes.

D.J Controna is quite an affable guy by all indications so why the script relegates him to be such a drab, grey role is beyond me. For all intents and purposes, he should be the ‘Channing Tatum’ of this film but the character of Flint never gets off the ground. Given his importance to the G.I. Joe mythology (especially going forward) Flint is distinctly overshadowed here, with the exception of an opening fight sequence that has him jumping across a military facility whilst mowing down the enemy.

Jonathan Pryce continues to ham it up big time and is always a joy to watch. The same goes for Ray Stevenson who handles the traits of Firefly with gleeful chaos. Adrianne Palicki dutifully obliges for eye candy and easily holds her own against Johnson and Willis whilst newcomer Elodie Yung also delivers as a kick-ass assassin. Justified’s Walton Goggins does well as a maximum security prison warden whilst Jurassic Park’s Joseph Mazzello and RZA appear in blink-and-you’ll-miss-them cameos.

The film opens big with an attack on the Joes that really sets this franchise up. The film then peaks in a mountain heist sequence that features Snake Eyes and a few dozen Cobra operatives which is exciting, especially if you’re a kid – this will have them running into their nearest toy stores to buy the figures (which I assume is the whole point to the film). After this, it noticeably drags and the end isn’t as satisfying as it should be. It still leaves you wanting more but ultimately, the first movie provided a much more resolute finale.

G.I Joe: Retaliation is more of the same action adventure that’s certainly watchable. It starts stronger than it ends and the lack of Channing Tatum has a lot to do with this, but in Dwayne we trust. Johnson delivers another knock-out performance that goes some way to reignite this franchise. It also elevates his stock in Hollywood. It won’t stay with you for long after the credits role but for 110mins at least, you’ll be hard pressed to find more multiplex mayhem than in G.I Joe: Retaliation.