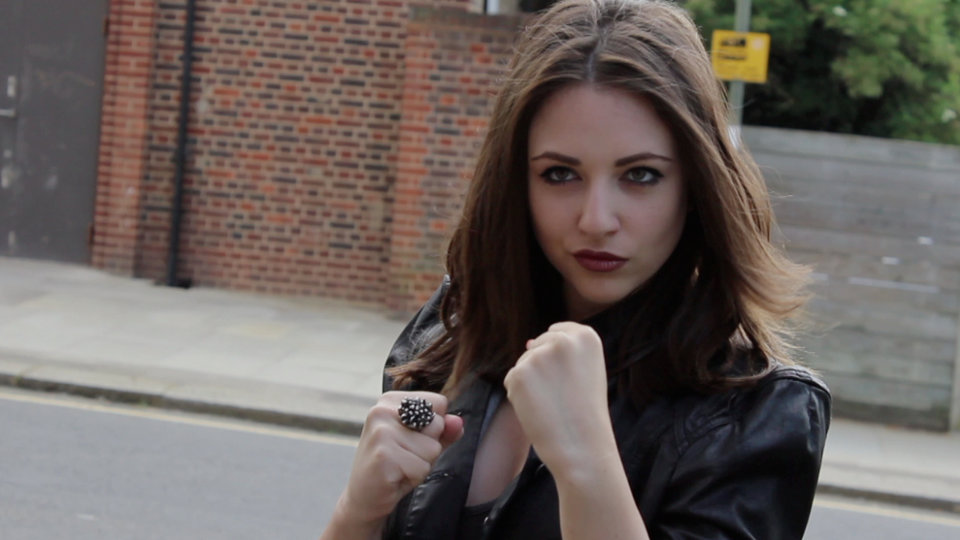 Rising star Nicola Posener has finally got to show off her martial arts skills in a new film that critiques the voiceover business.

A Voice to Die For tells the story of Jeff Brogan (played by veteran actor Bernard Holley) a former trailer voiceover artist, whose epic career in the 1980s and 1990s has long been forgotten, and he now struggles for work amidst an ageist business, full of young-guns and clique casting. But his former glory has a chance to be restored, when an enthusiastic web blogger interviews him for an article and Jeff’s illustrious career is brought to life in the film in a series of specially shot trailers.

Nicola, who starred in Anchor Bay’s Dawn of the Dragonslayer, Lionsgate’s Axed and upcoming horror film Crypt, headlines one of those fake trailers, The Karate Kick Chick. She plays Jemima McBain, a martial-arts trained vigilante, sworn to protect her neighbourhood from a terrorising patch-eyed thug, played by former The Bill regular Ben Peyton.

Nicola trained in stage combat at the Actors Studio at Pinewood as well as attending regular karate and kickboxing classes, but had not been able to put her skills to use on the big screen. But A Voice to Die For writer/director Oliver Crocker was only too pleased to make use of her talents. “Nicola is the perfect leading lady, a talented actress, who is professional, beautiful and addictive company – plus she looks really cool in a leather jacket delivering karate kicks to scumbags on the streets – it doesn’t get any better!

Also in on the action are Posener’s Dawn of the Dragonslayer co-star Ian Cullen, Jean Rogers (TVs Emmerdale, The Peacekeeper) and Dads Army legend Frank Williams, who plays a sword-wielding maniac!

A Voice to Die For will be released later this year.

In this article:A Voice to Die For, Nicola Posener, Oliver Crocker