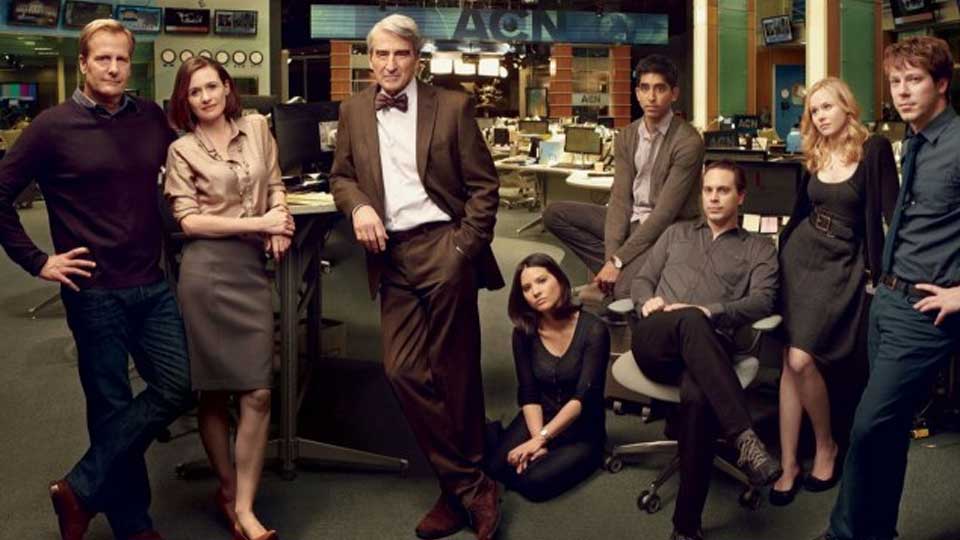 News anchor Will McAvoy (Jeff Daniels) runs the roost at the Atlantis Cable News (ACN) and regularly pulls in the ratings on his flagship show. During an on air outburst, Will causes controversy with her thoughts on American patriotism and is forced to take a holiday. When he returns many of his staff are gone and a new team is in place including executive producer MacKenzie (Emily Mortimer) who Will used to be in a relationship with.  Adjusting to his new team, Will sets out on a mission to change the network’s attitude to reporting the news.

The Newsroom is the latest show from The West Wing creator Aaron Sorkin. Using real-life events as the basis of its stories, the show aims to expose the inner-workings of a modern-day newsroom. As you would expect from a Sorkin show the pace is fast and the dialogue even faster with characters often adopting his traditional walk and talk style throughout scenes. If you’ve never especially been a fan of Sorkin’s work then you’re unlikely to find much you’ll like about The Newsroom. If you’re a fan of his however you’ll enjoy the familiarity of the characters, dialogue and storylines that form the first season’s 10 episodes.

Upon its arrival in the US The Newsroom attracted as many critics as it did people who loved it. It’s not hard to see both points of view once you’ve watched the first season. On the one hand the show is a clever, intelligently written and involving show. On the other it can feel a little too manic and you wonder if people actually speak in the way these characters do, frequently going off into monologues and out-witting each other with their superior intelligence.

One thing that you can admire about the show is the strong performances. Jeff Daniels proves he can pull off a meaty serious role as Will. It’s not hard to see why he was attracted to this part and the role gives him the opportunity to show another string to his acting bow. Emily Mortimer is simply tour-de-force as the manic whirlwind that is MacKenzie and she really plays up her history with Will throughout the first season. Alison Pill is noteworthy too as associate producer Maggie who has a tendency to speak her mind without thinking of the consequences.

The Newsroom will leave you in one of two camps; either incredibly impressed or utterly exhausted. We were closer to the latter by the end of the season due to the frenetic pace of the show and the sheer amount of dialogue you have to take in. The show is not without its charms but at times it comes across as very preachy rather than just entertainment. We enjoyed it enough to want to pursue the second season, which has just started in the US, but Sorkin could do with slowing it down just a fraction giving the audience some opportunity to catch their breath.