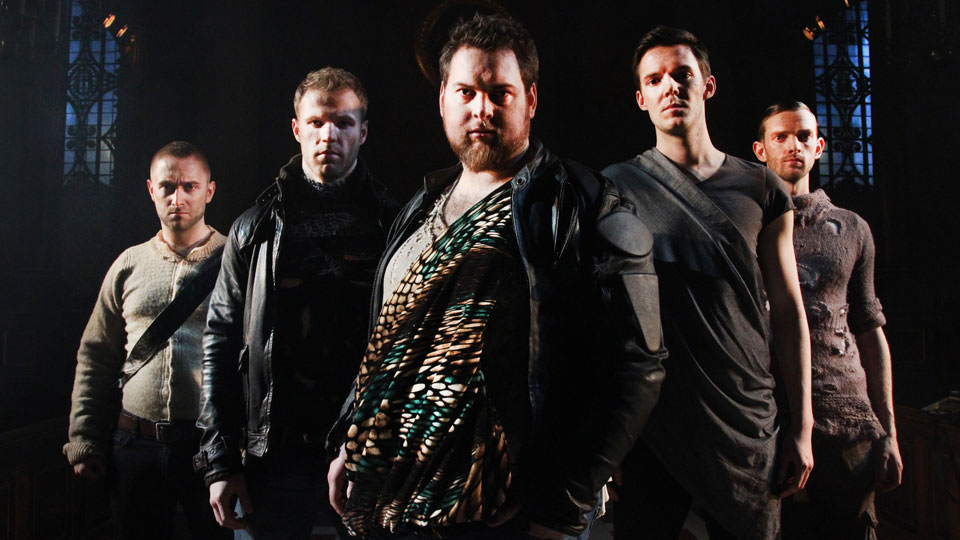 The gorgeous oasis of St Paul’s Church and Garden in Covent Garden is the setting for an open air production of Julius Caesar from Iris Theatre. It’s an evening’s Shakespeare in the heart of London played with plenty of blood and passion as the Republic of Rome is threatened by one man who wants supreme power for himself – leading to civil unrest and murder.

I’m yet to be convinced that open air theatre ever really works, and the success or otherwise of the production may lie in the vagaries of the English weather. Last night’s performance benefitted from a balmy, dry evening. The elements render it difficult for actors to make themselves heard too, leaving them little option but to shout every line, which is wearying on the ears after a while.

The action starts in the small courtyard at the side of the church, before a combination of the characters and bespoke ushers direct the audience around to the back, where benches are positioned in a semi-circle around the church steps. So far so good: but be warned that there’s an awful lot of moving about in this production, so don’t ever allow yourself to become too comfortable. The scenes shift between the exterior and interior of the church, as well as various points around the gardens.

Changing the location of the action is perhaps an idea that works well on paper. However, the awkward reality is that you face the frustration of queuing in a bottleneck of trudging audience members roughly ten times, and several minutes have to be afforded with each move to allow dawdlers time to settle in to each new location. This has the unfortunate side-effect of killing stone dead the pace of the piece; and every time the production builds up a head of steam (there are undeniably lots of lovely individual moments) it’s burst by the plod to a new locale, accompanied by the puncturing of any suspension of disbelief by the inevitable chit-chat along the way. The limited space in the gardens also means that, where the action takes place under a tent, you’re likely to have to stand and will possibly only see the actors’ feet.

Consequently, it’s very hard, if not impossible, to relax into this story and immerse yourself. If you’re the sort of person who prefers a pub crawl to settling down once you’re comfy, then this aspect of the show may not bother you at all. We felt the production would have worked better with fewer moves and with a shorter version of the text, since the three-hour duration feels ponderous given the stop-start nature of the action.

The most successful scenes take place on the steps and inside the church itself, where the production’s excellent design work (Ian Latimer and Joanna Beart-Albrecht) assist greatly in creating and sustaining atmosphere. The altar is adorned with an impressive statue of Caesar – and only a classicist will be irritated by the historical anachronism that it’s the wrong Caesar: since it’s a reproduction of the Prima Porta Augustus, a likeness of the first Roman Emperor Augustus Caesar, Julius’s adopted son, who appears in the play under his pre-imperial name of Octavius. The costumes – like something out of a science-fiction film, are effective, and the use of riot shields is inspired. The music and sound effects are largely successful too.

The performances are a little uneven. Some actors’ voices are lost entirely; others shout themselves hoarse. David Hywel Baynes as Brutus does his share of shouting, but he is impressively charismatic, and his central performance goes a long way to holding the piece together with a coherent through-line. The standout performance is the wonderful Daniel Hanna, whose Casca is constantly inventive, cheeky yet grounded, and enormous fun to watch. He’s the only one who successfully plucks out the humour in the lines; but he switches to gravitas when he needs to.

It’s always inadvertently comical when the same actor dies twice in one production; but the absurdity is compounded when the actor in the title part whose death is central to the piece (in this instance the unlucky Matthew Mellalieu as Julius Caesar), returns as a different character (Pindarus) who also meets a sticky end. Mellalieu is alternating between Pindarus and the ghost of Caesar in the second half.

Overall, this production of Julius Caesar, whilst boasting some aspects that work extremely well, is too uneven to heartily recommend; and the problem with the pacing is an uphill struggle that is never satisfactorily overcome. Julius Caesar will be best enjoyed by a laid-back audience enjoying a summer’s evening outdoors with a few warming drinks inside them.