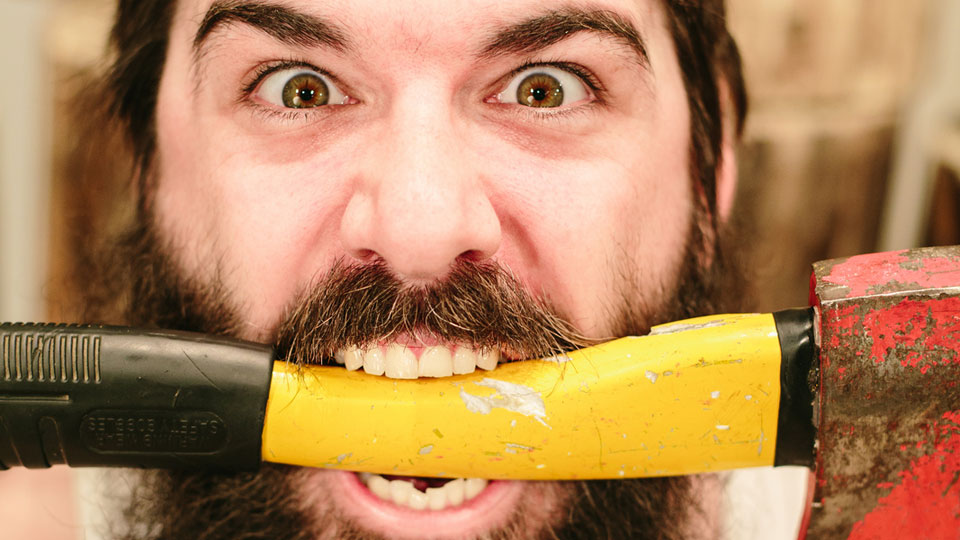 Antoine Carabinier-Lépine is a founder member of Cirque Alfonse, a circus troupe hailing from Quebec, Canada. He will soon be performing in London at the Southbank Centre with Cirque Alfonse’s hit show Timber! It will mark their UK premiere.

We recently caught up with Antoine to ask him what it’s like working with fellow family members, if he feels the fear performing daring stunts, and just what it takes to become a circus acrobat.

Hello Antoine. How are you enjoying London?

I really like London, it’s a great city. I spent some time here a couple of years ago, performing in the show Traces with Les 7 Doigts de la Main and in Nomade with Cirque Eloize and it was awesome. I think our time in London with Timber! will be amazing too – I’m really excited to be here.

Tell us a bit about Timber!

You could describe it as a lumberjack circus. All the props we use in the show are inspired by lumberjacks – we juggle with axes and do acrobatics with a huge saw and with logs. Everything we do is real – there is no cheating. The axes, saws and knives used in the show are genuine and sharpened and we don’t wear steel toe-capped boots or any protection other than gloves. It’s also a family show – my father, my sister and her little boy Arthur, who is two, and my brother in law are in the show with me, and it’s pretty special to work as a family.

Who will enjoy the show?

Everybody! It is moving for adults, scary for teenagers, and makes children laugh and be happy. It’s really for the all family.

There are three generations of the same family working together. Do you all get along well?

Not every day! I’m joking; we all get along really well. We had some difficult moments putting the show together, because we are coming from different artistic backgrounds – some trained and some not (my dad started performing circus aged 60!) but now we have created Timber! we are really happy to tour and perform together. It’s really special to have the chance to tour with your family.

Who has the final say on the artistic vision?

We work with a really good director and friend – Alain Francoeur. He was my first director when I graduated from circus school and he is now kind of part of the family. Everyone in the company gives input and ideas when we create a show, and we all share the same vision to keep things as authentic as possible. But at the end of the day, if a decision needs to be made, it’s my sister and myself who have the final word.

Where did the company name Cirque Alfonse come from?

It’s taken from the name of the village near where I grew up with my sister – Saint Alphonse-Rodriguez. My parents still live there on the farm in the remote forests of Quebec, outside Montreal, and my sister and her family have a house nearby. It’s a really nice place to live.

What qualities are necessary to become a circus acrobat?

Training is the key, along with passion. You need to love circus.

You say saws are used on stage. Is there any fear involved in performing the stunts?

Of course! When you don’t fear is when it starts to become dangerous!

What can you tell us about the music used in the show?

It’s traditional music from Quebec, which is similar to traditional Celtic music from the UK. Guitars, fiddles, banjos, a jaw harp and rowdy singing are the live accompaniment. We are from a region where this kind of music is really present. It’s a culture that we are starting to lose in Quebec because traditional music is mostly oral, and we want to keep that culture alive.

Has running away with the circus lived up to your father Alain’s expectations?

I think so… You’ll need to ask him! I think he is very happy to be with all his family!