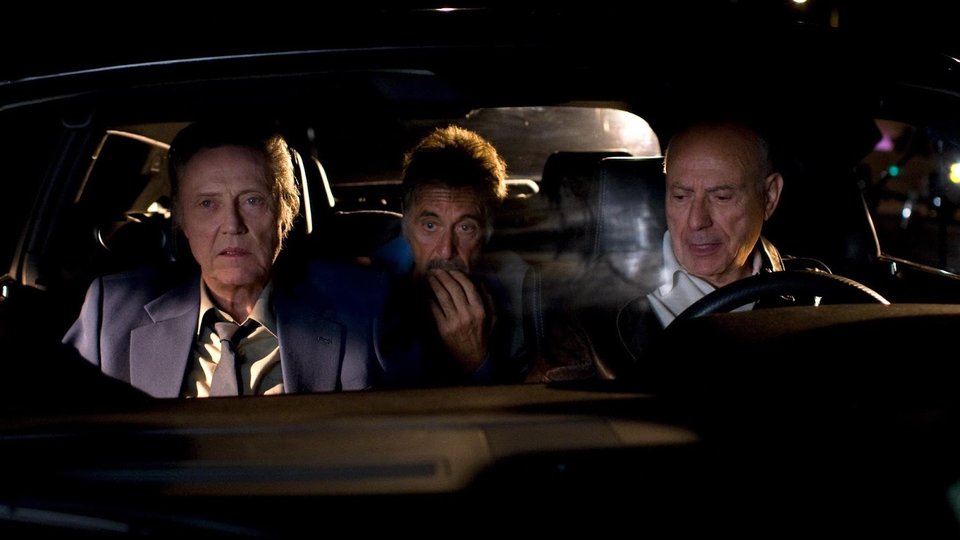 Val (Al Pacino) has just served 28 years in prison, as he leaves he is picked up at the gate by his buddy Doc (Christopher Walken). Val wants to party on his first night of freedom, but little does he know that Doc has other plans for him. In fact, Doc has been instructed to kill Val by local crime boss Claphands (Mark Margolis) as Val had killed his son in a robbery gone wrong. But the night is young and the end of Val’s life doesn’t need to happen until 10am the following day. So overnight the two friends come into contact with the following: A cat, a brothel, a nightclub, drugs, alcohol, a stolen car, their old wheel-man Hirsch (Alan Arkin), the local dinner, a dead body and a new and young female called Alex. But is it enough for Val?

The first thing that Stand Up Guys has is a brilliant first line cast, Al Pacino and Christopher Walken together throughout the film. Here are two actors that have won every conceivable award going. Add into the mix another award winner in the shape of Alan Arkin, and you have a really good cast. Also the secondary cast isn’t too bad as it consists of Julianna Margulies and Mark Margolis, who even though they don’t have large parts, still bring extra acting power to the film. But really the film hinges on the interaction between Pacino and Walken, and honestly it could not be any better.

There are so many funny exchanges between the two, it all sets out the stall from when they hit the nightclub and Pacino decides to snort angina tablets off the bar, it then continues through them stealing a car, to sitting in a dinner having early breakfast, right through to when they go to get a new suit each – that bit is especially funny as they take turns in making funny comments about each other’s health and body shapes. Why nobody put these two together in a film before is crazy, and then give them free reign on making jokes boggles the mind.

The story isn’t the greatest in the world; in fact it’s pretty wafer thin and could have been written on a napkin. But we don’t mind a regular story like this if the film itself plays out so well. Alongside the great cast, the director seems to allow the film to just take a natural course rather than shoe-horn in great chucks of none relevant scenes. In fact, it feels like there isn’t much directing happening, more that they just allowed Pacino and Walken to work it themselves.

We say ignore the posters and trailers for the film as it makes it look like an action film with loads of guns and killing. This could not be more wrong, and we were mightily happy to see this is a buddy comedy between two old people that used to be able to pull off the greatest heist jobs ever but now find that the years haven’t been as kind to them as they would have hoped. This movie is a comedy plain and simple, and very well done it is too.