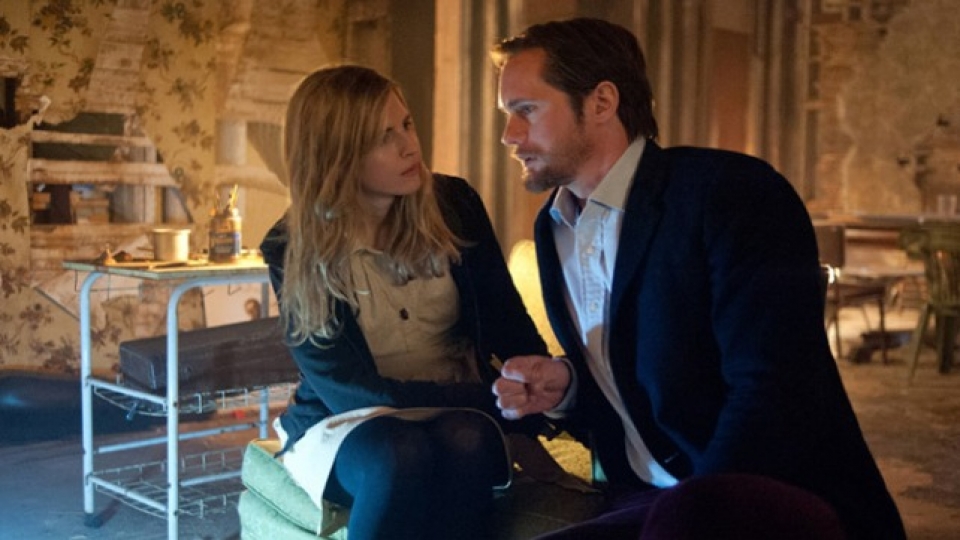 Sarah Moss (Brit Marling) is an ex FBI agent now working for a private intelligence firm that ruthlessly protects the interests of its A-List clients. Chosen by the company’s CEO Sharon (Patricia Clarkson) to go deep undercover and infiltrate The East, an elusive band of anarchistic warriors seeking revenge against major corporations. Sarah soon ingratiates herself into the group and starts to join them on their jobs or “jams”, but she finds herself being drawn to leader Benji (Alexander Skarsgard) and his collective knowledge. This leads to a crossroads in her personal and professional life, one that can never be recovered from

The East comes from acclaimed director Zal Batmangli, who gave us the wonderful Sound Of My Voice a couple of years ago. It is co-written by Zal and lead actress Brit Marling, based somewhat around their experiences of hitting the road and living off the grid for several months in response to taking part in ‘Buy Nothing Day’. Deciding to take it back into the worlds they knew (film) they set out to make a film that would say something about the world at large.

It’s fair to say, this film isn’t a light hearted romp in the hay instead it’s a fully functioning commentary on the way the world of big businesses has become the norm, and that they cannot be touched by the law. Instead it takes a band of social activists to try and take down the evil conglomerates.

The movie’s political agenda is clear from the outset, but that is no bad thing as we straight away side with the group that want to inflict this punishment. Their thought process also comes across as very strategic and calculating, at times boarding on the maniacal – normally reserved for horror films. The film keeps focus of the main plot line throughout, and whilst there may be sub-plots that spring up and then gradually disappear after being finalised, it’s left to the evilness of the group with high levels of tension whilst they go about doing the deeds that keeps you hooked.

With Brit Marling co-writing the film, it could have been perceived as a vanity project and nothing more. Instead Marling takes hold of the role and completely becomes the undercover agent, her ability to become chameleon like from one scene to the next shows what an amazing talent this woman is. This role continues to point to her as the next huge female Hollywood star, at no point throughout this film is she devoid of thought or action that doesn’t make her instantly likeable.

The East has a set up a formidable cast of actors that each generate something to their roles that makes them stand out – Skarsgard as Benji reeks of sexual power but is so conniving it’s almost bearable, Page’s Izzy is the loose cannon that seems unable to hold her mouth and Toby Kebbell’s understated performance as scientist turned activist Doc shows that there is a master plan and it has many legs and functions to it. We were extremely impressed with Kebbell too; he really should be doing bigger films than what he appears in at present.

The East, even though only a film, has a massive agenda and it sets the mind thinking long after the credits have finished. A complex yet inescapable story wonderfully moulded together with top level acting from the entire cast. This is “V For Vendetta” for the modern generation.

Advertisement. Scroll to continue reading.
In this article:The East