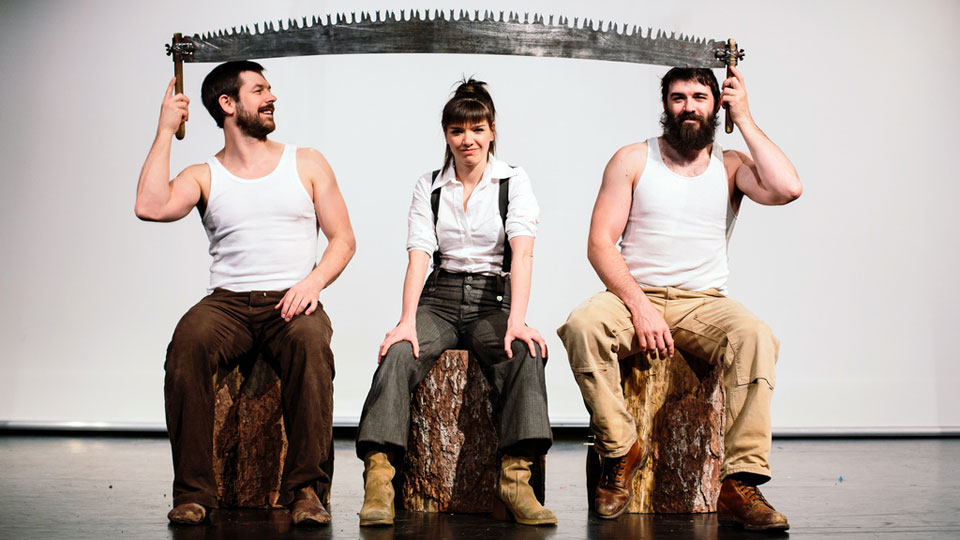 From the remote forests of Québec, three generations of the family circus troupe, Cirque Alfonse, travel to London to present the UK premiere of Timber!

Timber! features a family from the remote forests of Québec who juggle axes and perform daring aerial acrobatics and stunts with lumberjack saws, alongside clog-dancing, tight-rope walking, cooking, vegetable chopping and storytelling. Timber! is set to traditional music, with fiddles, banjos, a jaw harp and rowdy singing as the live accompaniment to this daredevil, heart-warming show.

Cirque Alfonse is made up of three generations of one Québécois family – 66-year-old Grandfather and amateur clown Alain Carabinier, his two children, Antoine, 32, and Julie, 29, who are a trained circus acrobat and a trained dancer respectively, Julie’s partner Jonathan, 32, a trained circus acrobat who has performed in Cirque Du Soleil’s Love, and their 2-year-old son, Arthur. The family are supported by live musicians, two of whom are friends of the family who grew up in villages nearby. Cirque Alfonse are the latest in a long line of circus greats to emerge from Quebec – joining Cirque du Soleil, Cirque Eloize and les 7 doigts de la main on the world stage. Members of Cirque Alfonse have worked with all of these world-renowned companies.

Music is composed by violinist David Simard and David Boulanger, of hit Québécois folk band La Bottine Souriante. When grandfather Alain Carabinier was growing up in Switzerland in the 1950s, his dream was to run away with the circus.
As a 60th birthday present for their father the siblings created a circus show for Alain to star in, which was performed in 2006 under a big top in their local village. Alain finally got to run away with the circus in his 60s. He had never been on stage before in his life. As a surprise, all his friends and family travelled from Switzerland to Québec to see the show, and it was such a success that Cirque Alfonse was born. The family named the company after the village near their farm: Saint Alphonse-Rodriguez.

Timber! comes to Southbank Centre after its world premiere at the Montréal Completely Circus Festival in 2011, and extensive touring in Québec, Switzerland and France. A programme of participatory workshops will run alongside the Southbank Centre shows.

For more information and to book tickets see http://www.southbankcentre.co.uk.