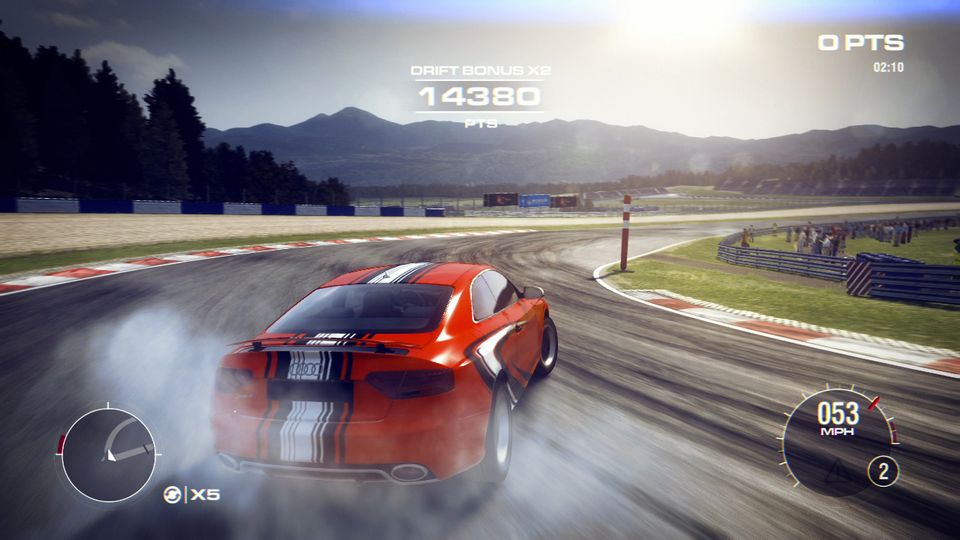 It’s hard to believe it’s been five years since the release of Race Driver: GRID. We’ve been treated to some fantastic driving games since then, including many from Codemasters themselves, and now they’re finally back with a sequel. We’ve been spending some time with the Xbox 360 version of GRID 2 to see if it was worth the wait.

Here at EF we like our driving games and would even say we’re pretty good at them too. However our first few minutes with GRID 2 were a punishing experience. The racing in GRID 2 focuses on drifting and your car controls somewhere between simulation and arcade. Drifting around corners takes practice to get right and until you master it expect to be spending a lot of time crashing.

Fortunately the fabulous flashback mechanic returns allowing you to rewind the last few seconds’ action. This isn’t unlimited but it is incredibly useful enabling you to try that last corner again without the ridiculous speed and spectacular crash. At first it can feel a bit like cheating but as there are no driving aids on offer it really helps you learn the game and saves having to restart a whole race when things go bad.

One thing that doesn’t make a return though is the brilliant cockpit view. It seems most players don’t race that way and leaving it out allows the developers to spend more time making everything else look lovely. They’ve succeeded too as the detail is incredible and everything looks very crisp and clear. The game features track racing on licensed circuits as well as events on city streets and open roads. There’s a nice variety in locations too including the opportunity to race in Chicago, California, Paris and Abu Dhabi.

The single player campaign in GRID 2 sees you spotted by investor Patrick Callahan. He’s creating a new worldwide racing series, imaginatively called the World Series Racing, and invited you to take part. He has big plans for you and wants you to be the rising star. As new events appear you can pick and choose the ones you fancy and doing well increases your fan base.

As you progress you also get offered new cars and sponsorship deals. New cars come in pairs and you can choose the one you prefer with the chance to win the other on the track later. Sponsors set you challenges in return for plastering their logo on your motor. Before a race you can take a car out for a drive and choose which to enter into each event. There’s no tinkering under the hood though which may disappoint car fanatics.

Events feature a variety of race types which keeps things fresh. These include time trials, pack racing, 1v1 face-offs and challenges such as overtaking cars where your multiplier grows for each car you pass safely. One of our favourite race types is the new LiveRoute event where the course isn’t predefined. Instead the route you’re racing on constantly changes requiring you to really concentrate on the road ahead. It’s not uncommon to be hurtling down a long straight only to be faced with a nightmare hairpin.

The presentation of the game is as stunning as we’ve come to expect from Codemasters Racing titles. The game also integrates with their online RaceNet community. The biggest plus point here is that when you finish a race you are instantly shown how well you’re doing compared to your friends.

Multiplayer is kept completely separate from the singleplayer with its own progression system. The rivals option hand picks a player of similar skill to become your rival and then you can face-off against them. Global Challenges present you with ever changing events to compete in against the worlds and your friends. Or you can just race in customisable events against up to 11 friends which is fantastic fun.

GRID 2 is a fantastic package that is sure to please racing fans. There’s a huge variety of things to do and the multiplayer and RaceNet integration will keep competitive players coming back. A few more new ideas might have been nice but if you’re after a racing game to keep you busy until the next generation hits then GRID 2 is a brilliant choice.