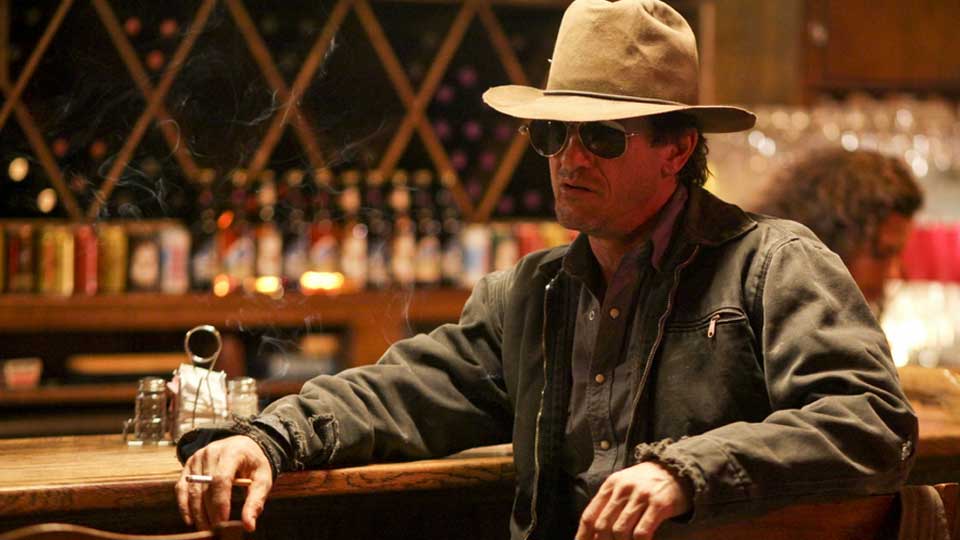 The Rambler (Dermot Mulroney) gets out of prison and returns home to his nagging wife Cheryl (Natasha Lyonne). Upon discovering she’s pregnant with another man’s child, he takes off on a road trip. Along the way he meets a variety of weird and wonderful characters including a scientist and a beautiful young woman (Lindsay Pulsipher). Experiencing a series of bizarre events, The Rambler is haunted by unsettling flashbacks and soon finds it difficult to understand what is real.

Calvin Lee Reeder’s The Rambler is an attack on the senses and isn’t the most pleasant of viewing experiences. Told in a dreamlike narrative that recalls David Lynch, The Rambler jolts through a variety of scenarios with television static appearing to be the transition between each encounter. It would seem that Reeder’s aim is to disorient the viewer putting you in the shoes of The Rambler who is struggling to tell fact from fiction.

Early on in the movie he encounters the Scientist (James Cady) who keeps blowing up people’s heads by trying to record their dreams. This soon makes you realise that perhaps everything you’re seeing on screen isn’t real and that perhaps it’s The Rambler’s dreams you are witnessing. This is where we come back to the David Lynch comparison we made earlier in this review. When Lynch uses techniques to bewilder his audience it doesn’t feel forced and there’s still plenty to sink your teeth into. For Reeder however he isn’t able to evoke the same feelings that Lynch would handling the same story and it all feels a bit of a mess.

The Rambler begins as a seemingly odd road trip drama before descending into a grotesque horror that is so over-the-top it’s impossible to find it scary. We, the audience, are supposed to believe that we’re watching The Rambler descend into a nightmare but the storyline is so incoherent and the characters under-developed that you really don’t care what happens to anyone.

Frankly we’re baffled what the talented cast saw in this movie when they read the script. Perhaps it was a case of ‘looks good on paper’ but hasn’t translated well in the execution. Dermot Mulroney, who was recently seen in the now cancelled Enlightened, deserves better than this and he’s a more capable actor than he’s allowed to be here. Similarly former True Blood star Lindsay Pulsipher does little more than scream and look seductive. Natasha Lyonne is fantastic however as Cheryl but she’s barely in the movie.

The Rambler isn’t quite what it thinks it is and for that reason we felt disappointed. Silly horror can be really fun (e.g. Evil Dead) and mind-bending narratives can be intriguing (e.g. David Lynch’s Lost Highway) but this one fails on both counts. Instead the movie is an abundance of ideas that feel incompatible and leaves you feeling indifferent by the end.

The Rambler is playing at the rerun Theater, Brooklyn from 7th to 13th June.