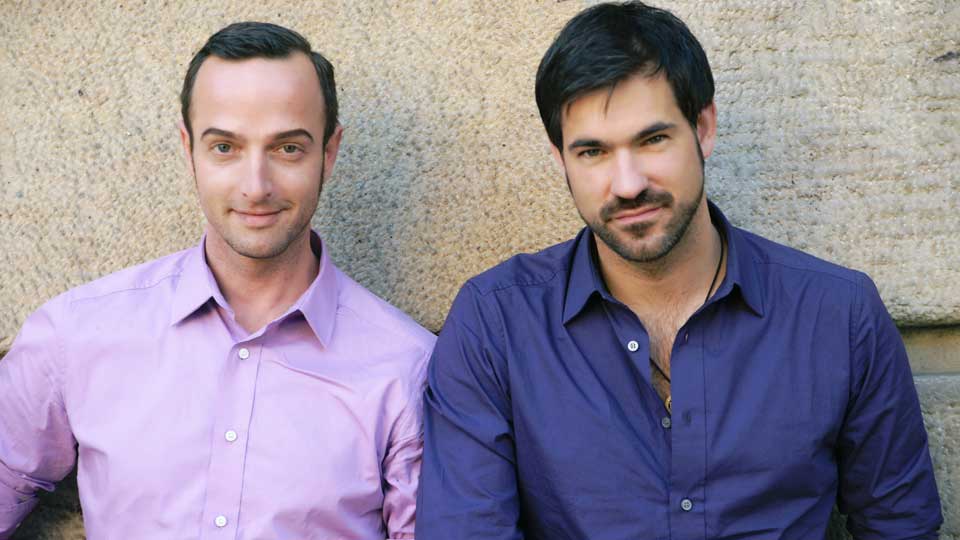 Ernst (Frank Christian Marx) is a banker who leads a conservative lifestyle in Berlin. He meets extrovert Tobi (Udo Lutz) who is his polar opposite and the two men begin a relationship. Six months down the line and Ernst begins to tire of the lack of passion in his relationship with the party-hard Tobi. Enter his old friend Uta (Alexandra Starnitzky) who comes to visit and is determined to drive a wedge between the two men. Whilst manipulating an unsuspecting Ernst, Uta tries to drive Tobi away. What she didn’t count on was Tobi fighting back to save his relationship and get rid of her in the process.

Men to Kiss is co-written by one of its leading actors Frank Christian Marx with Andre Schneider and Juergen Hirsch. The screwball comedy utilises characters from Schneider’s 2010 movie Alex and Leo, namely Tobi (Udo Lutz) and Leo (Marcel Schlutt) with smaller roles for Alex (Schneider) and Steffi (Sascia Haj). One of the first things we will tell you is that you do have to leave your logic at the door before sitting down to watch Men to Kiss as the plot does stretch believability. If you just go with the flow though, you’ll find much to enjoy.

Essentially Men to Kiss is a love triangle of sorts with Ernst caught in the middle whilst Tobi and Uta fight for his attention and affection. Uta is pretty much unremittingly evil with very little in the way of redeeming qualities. Her one sole purpose is to break up Ernst and Tobi by whatever means necessary. Her rather cut-throat approach to her mission leads to Tobi enlisting his friends to help get rid of her and make Ernst see what she’s up to. This does mean that Tobi’s efforts to fight back get just as crazy as Uta’s attempts to break them up. It’s at this point you just have to accept that the plot becomes a little slapstick in nature in order to full enjoy the movie.

What really lifts Men to Kiss is the performances of its three lead actors. Alexandra Starnitzky is suitably unsettling as Uta convincing and manipulating the viewer as much as she does the characters in the movie. She gets some of the best lines and moments and is a joy to watch. Udo Lutz fleshes out the character of Tobi above the overly-camp character we know from Alex and Leo. From outrageous outfits to playing Uta at her own game he’s lots of fun to watch.

The real standout star for us though is Frank Christian Marx. His performance as Ernst is simply adorable. From the moment we see him trying to hide that Tobi is his boyfriend whilst at work through to the film’s conclusion he gives a performance packed with believability that is endearing and utterly adorable. It of course helps that he’s very easy on the eye and that we were crushing on him for the entire movie.

Men to Kiss is an enjoyable way to spend 83 minutes. With a light and humorous tone, the movie is a crazy trip that will leave you smiling. Sure the story could have been just that bit tighter in places but it’s nice to find a gay film that doesn’t take itself too seriously. Men to Kiss is pure entertainment and isn’t trying to hammer any message down your throat. What it will do though is leave you begging for more of Frank Christian Marx on your screen.