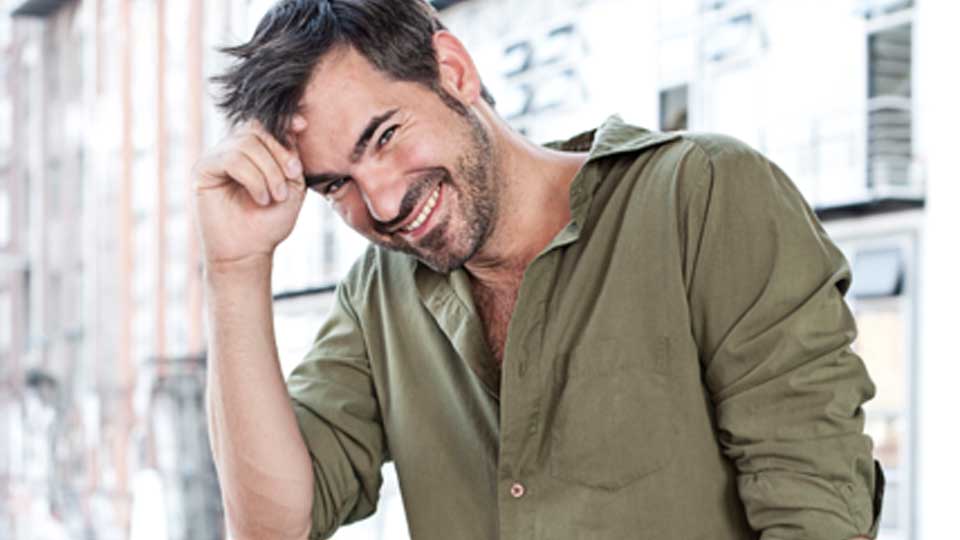 Frank Christian Marx is the star and writer of new gay comedy Men To Kiss.

The film was released this week through TLA Releasing and is a screwball comedy about polar opposites Ernst and Tobias who are trying to navigate a relationship whilst Ernst’s friend Uta tries to split them up.

We caught up with Frank to talk more about the movie, discuss gay cinema in Germany and find out what he’s got coming up next.

How are you today Frank?

I’m fine. It’s early in the morning. Normally I’m at producing school now. I’ve made one film but I really have a lot to learn. I’m at school for 4 months.

Did you decide to study film production because of Men To Kiss?

Yes. In Germany you get a scholarship when you make a film and they give you four months of free lessons. I got that from the government.

Tell us about Men To Kiss. What can people expect from the film?

The film is very crazy. The situation is very screwball. I love the old screwball movies with Katherine Hepburn and Cary Grant like Bringing Up Baby and His Girl Friday. It was inspired by these movies and is about two characters that are very different from each other. They have a connection but they don’t really see it. Tobias and Ernst are perfect for each other but Ernst thinks that Tobias isn’t right for him as Ernst is too-straightlaced and a banker whereas Tobias is a performance artist. When Uta comes into the film, she’s the best friend of Ernst, she wants to break them apart and sees that there’s a chance to do that. It’s get really bitchy and crazy.

We made the film last year and it was the first gay romantic film in Germany ever without a coming out issue. In our film all the characters are out of the closet and don’t have a problem with homosexuality. That was something very special in Germany as it had never been done before.

Yes, normally German movies are focused strongly on the story, dialogue-driven and nothing really happens. We wanted to turn that around and do something crazy. We wanted it to have an American or an English feel. There’s one scene at the end in the shop that’s like Monty Python. We wanted to show all of those influences and not be so German.

You either love the film or you hate the film. There’s nothing in-between.  You either go with the flow or you say ‘what is this?’ In Germany the audience loved the film and the heterosexual press loved it but the gay press questioned why there wasn’t a coming out issue or any of the usual problems.

We have read some reviews of the film and it really does seem to have divided people.  Some critics have said it’s not realistic but that’s the point isn’t it?

We have so many heterosexual comedies that are far-fetched so why not have a gay comedy like that? So we made it.

(laughs) yeah! The one thing that people said to us is that it wasn’t gay enough. It is a gay movie but it’s not about being gay. It’s about being in a relationship and being the opposite of each other. It’s about fighting for your relationship which can be gay or straight.

Do you think we’ll see Ernst and Tobias again in future films?

Ah! Maybe. We’re thinking about that. We love the characters and maybe we will do another movie with them but we’re not sure yet. Ente Kross, our German production company, is the first German production company that only develops queer stories and films. We developed a short movie The Phallometer about a gay man in the Czech Republic which is a satire. We’re sending the film to the festivals right now. The next film we’re doing is kind of a gay Golden Girls. It’s a house full of 60-year-old gays and explores their friendship with each other. The nephew of one of the characters comes to the house and gets into trouble. It’s a much more story-based film.

It sounds really interesting. We can’t wait to see it.

We’re shooting it next year. Our production company isn’t one of the major companies in Germany but it’s incredible and wonderful the people that have already helped us.

Ah! Yes. It’s not one of the biggest ones yet. You’re totally right.

Let’s talk some more about Ente Kross which we understand means Crispy Duck in English. Why did you decide to set the company up?

I know every gay movie made out there in the world. In America they do cheesy comedy films called Eating Out which are just about joy and laughing. We wanted to create something like that. All films here Germany and TV shows want to tell coming out stories of men aged 16 or 17 and we want to change that. We want to tell the stories of older people. This is very important for me and gay life doesn’t stop at 25. Your life really starts when you’re turning 30; that’s my opinion.

At first we had a lot of people saying to us that it’s not good to make the production company focus only on gay films. I wanted to do that because there isn’t a company like us in Germany. I wanted to be the first and wanted to be there for the community. I want to help them and hear their thoughts and feelings about what they want to see.

Do you have any other projects in the pipeline this year?

Yes. I’ve got a thousand projects! Next weekend on my birthday I’m filming a German TV show called SOKO and I’m playing the bad guy. I’m playing a murderer so you’ll see the bad side of me. I’m getting back into my acting workshops too. I don’t want to have a production company just to give myself characters to play.

I want see people and really introduce the world to different people and characters. I want to play in different films and I’ve got two ahead of me that aren’t produced by me. I’m the bad guy in both of them which is different for me because normally I’m the nice guy.

I’ve been asked to be the creative decision maker of a company that makes films like I Want Your Love that contain stories and real sex. I have to think about that but it’s really exciting and I’m making my decision next week.

Next year we’re making a film about when Germany was divided after World War II. We’re making a story about a gay soldier during that time. We have lots and lots of ideas. I’m on the edge of a nervous breakdown (laughs).

Please don’t have a nervous breakdown!

Men To Kiss is available to buy on DVD through TLA releasing now.