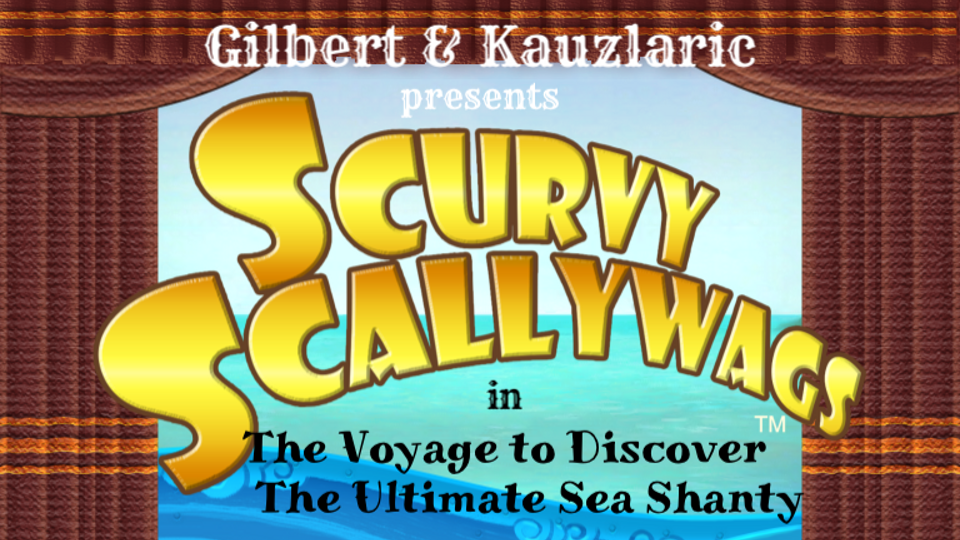 Scurvy Scallywags in the Voyage to Discover the Ultimate Sea Shanty, to use full title of the game, is a musical match-3 pirate RPG for iOS. It was developed by Ron Gilbert (Monkey Island, The Cave) and Clayton Kauzlaric (Voodoo Vince) who previously collaborated on DeathSpank and The Big Big Castle.

If you haven’t already guessed by the title, or the developers involved, this is a game with a sense of humour. It’s actually set in a theatre on the opening night of the Scurvy Scallywags play. You have the starring role as lead pirate while at the same time you must stop someone who is trying to sabotage the production. During the play you will travel through four mysterious lands in search of the hidden verses of the long-lost Ultimate Sea Shanty.

Most of your time in Scurvy Scallywags is spent playing a match-3 game on a 8×8 grid. At first glance this may look like just another match-3 game but there are some unique twists that make this well worth your time. The core gameplay does revolve around matching 3 items but this is where it gets interesting. New items don’t drop from above but instead fill the spaces left in the same direction as you swipe to perform a match. This allows you to shuffle items around the board.

The reason for this is because, as well as items, one space on the board is also taken up by your pirate. Through matching you can manipulate the grid to move your pirate around. The levels feature all manner of items to match such as gold pieces, junk and resources. When matched items are sent to your stash. Junk is useless and can be later sold for more gold. Resources such as wood, rope, nails and cloth can also be sold but it’s more useful to keep as you can use them eventually to build ships. Once built ships act as boosts like reducing cooldowns or increasing the chance of items and treasure.

During your performance you are given quests to obtain certain items. Collecting the required number of each completes the quest and rewards you with gold. While matching and collecting items enemies can also appear on the grid. Your pirate and enemies have power ratings and you need a higher rating than an enemy to defeat them in battle.

If your power is too low to beat an enemy then you need to match power items to obtain more. To fight an enemy you need to be in an adjacent square so with careful matching it is possible to avoid a fight until you are ready. You can do this by moving your pirate or enemy away from each other. Losing to an enemy reduces your number of lives. When you defeat an enemy you win a treasure chest that can reward you with more gold or items. As you get further into the game enemies get tougher and you often have grids with multiple enemies at a time.

The way the grid collapses is a little confusing at first but after a few games you soon get the hang of it. Once you get used to the large variety of items that may appear on the grid things also become a little easier. However with so much going on and the strategy element needed to get into position you often need to consider your options rather than rushing your next move. This makes it hard to get into that trance like state that you get from games like Bejeweled.

At the start of the game you get the chance to create your pirate from a limited selection of options. These include choosing your face, hat, clothes and boots and are initially have no bearing on your pirates stats. During the game you will discover many new clothing items and weapons that can alter your appearance and boost your stats.

As you play you also earn XP which can level up your pirate. Levelling earns you a stat point to spend on your choice of crit, dodge, power, gold and damage. It also unlocks new skills that you can buy with the gold that you amass. There are many skills to unlock such as more melee damage, ranged damage, more gold, higher chance of quest items and the ability to jump multiple grid spaces.

Graphically the game is rather simplistic with a cartoon aesthetic. There is plenty of humour to be found in the graphics and the text descriptions of most things are rather funny. The music is excellent and constantly changing which fits the game really well. The Sea Shanty’s are also a lot of fun and they are sung to you by a pirate crew when you find a new one.

Refreshingly the game doesn’t constantly badger you into spending cash on in-app purchases. There’s an in-game store where you can go to buy items you need with gold and for those who want to get rich quicker you can buy a gold doubler for £0.69.

Scurvy Scallywags is essential for fans of the match-3 genre. It features a fantastic mix of strategy and puzzle with some RPG elements thrown in for good measure. It’s nice to see the developers added plenty of new ideas to the match-3 core instead of just churning out a Bejeweled clone with different graphics. It’s one of the best match-3 games we’ve played for ages and it has kept us entertained for hours at a time.

Scurvy Scallywags is available now on the App Store for £0.69 or you can check out the official website for more information.