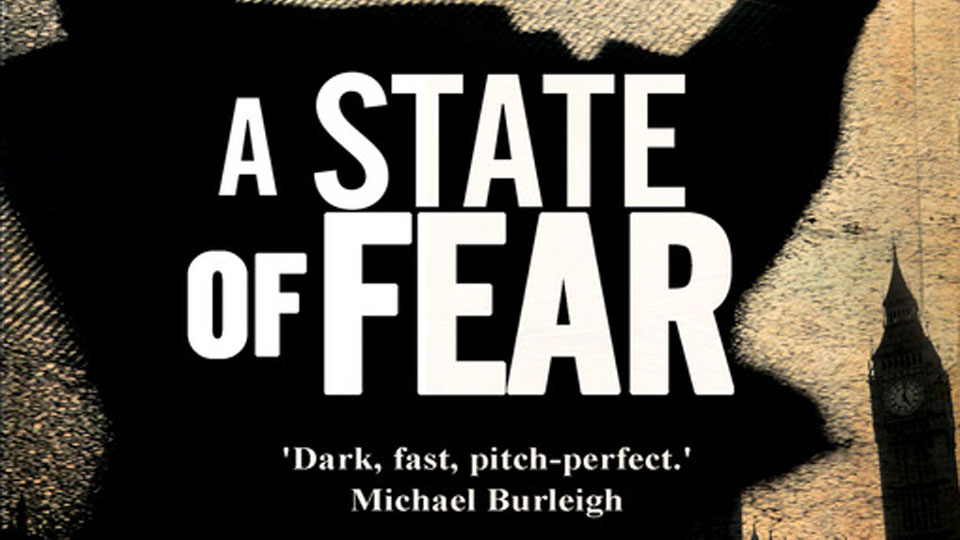 A State of Fear is a new thriller from mysterious author Joseph Clyde – a pseudonym for someone who “has had a career in public service and has worked very closely with the intelligence and security services”. The subject matter of A State of Fear reveals the need for a nom de plume, and for the author, possibly a public figure, to hide behind an assumed identity.

The book boldly tackles brave and inflammatory subject matter that almost all writers shy away from. It uses the threat of Islamic terrorism as the foundation of its story, since the attack is explicitly provoked as revenge for the assassination of Osama Bin Laden. The Salman Rushdie affair and more recently the published Danish cartoons have formed stark warnings about the extreme reprisals that fictional representations of Islam can provoke.

A dirty bomb is detonated by Islamic terrorists outside London’s Bank of England. A young doctor, Julie Opie, is nearby when the explosion occurs, and she takes refuge from the nuclear fallout in a beauty salon whilst the authorities take control. Julie shares her unlikely shelter with an interesting cast of characters, and it’s fun to guess which ones will become integral to the plot. In finding out the truth behind the terrorist attack, Julie is aided by two middle aged men: her estranged husband Martin, a freelance journalist who’s better at escaping reality than confronting it; and Tony, an aging and prematurely cynical MI5 agent.

The near-future imagined in A State of Fear is fictional, but all-too believable. The dirty bomb in the centre of London creates quarantine camps where those afflicted by radiation poisoning are holed up by the under-pressure authorities (it’s interesting to note that governmental bodies remain an anonymous and usually invisible presence throughout the story, represented almost wholly by Tony). White supremacist vigilantes take the law into their own hands and enact vicious and deadly reprisals against innocent Muslims. It’s a frightening scenario of what Britain may be like if it continues to divide itself under racial, gang and religious lines where prejudice is allowed to foster on all sides. This is not a novel for the faint-hearted.

It’s important to say that Clyde doesn’t come down on any particular side or proselytise for a specific political worldview. The most enigmatic character in the story is Safia, a young devout Muslim woman. Tony is convinced she’s connected to the bombing as much as Julie is convinced of her innocence. The question is satisfactorily answered in ways that lend nuance to the author’s depiction of different cultural identities throughout the story; most especially since Safia is caught between the competing values of her fundamentalist brothers and the liberal morals of her no-less-devout uncle.

Stylistically, A State of Fear is an immensely readable thriller. It’s a page-turner for sure, but the story is commendably more character- than plot-driven. It’s exposition-heavy at times, where the author tells rather than shows. Sometimes characters (Chris Burnham being an obvious example) are shoehorned into the prose simply to tell a protagonist crucial information at the right time. Occasionally characters give away too much to remain entirely credible, such as when Julie learns the whole story of the terror plot, and when Martin rather quickly wins the confidence of a group of white racist thugs. These visible mechanics are acceptable within the bounds of a genre where the pressure is to deliver a cracking yarn rather than a literary classic, and they don’t detract from the author’s success in achieving the former.

For my taste, there are too many character viewpoints. The most successful stories work with a single protagonist, but A State of Fear is told from many alternating points of view, principally that of Julie, Martin, Tony and the terrorist Jayson. Martin and Tony inevitably, despite being differently characterised, merge into one in the reader’s mind and perhaps should have been condensed into a single character.

Despite reservations over multiple protagonists, the telling of the story from the viewpoint of the terrorists proves a masterstroke. Clyde convincingly gets inside the heads of religious extremists, represented both by a hard-line Syrian, Amer, and Jayson, a recent young and enthusiastic convert who together mastermind an atrocity. We follow them from the planning stages, filming videos whilst in hiding, through to the dramatic execution of their plot.

The Trinidadian Jayson proves the most tragic character of the story, as Clyde paints him as a thoroughly likeable and chirpy young man whose mind has been fatally poisoned by religious ideology. In many ways A State of Fear is a wake-up call to anyone still fooled into imagining religion a force for societal good, where it’s not just possible but desirable to believe that anyone who doesn’t subscribe to your beliefs are destined for hell and consequently not worthy of life.

Fast-paced, dark, disturbing and told with enough flair to keep the average reader churning through its 320 pages, A State of Fear is a standout thriller for the early 21st Century. Its brave and troubling subject matter and gripping storytelling ought to earn it a wide readership.