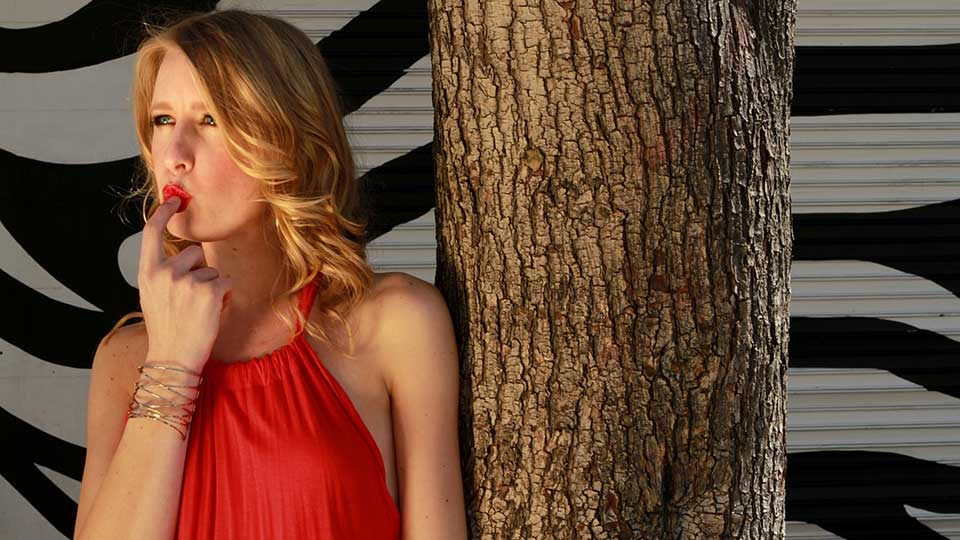 It’s Wednesday which can only mean one thing…new Bloomers!

That’s right folks the fourth episode of the new season has just debuted and we’ve got another interview with one of the cast for you. This week we’re talking to Holly Holstein who plays the outrageous and fabulous Karen.

Holly tells us what to expect over the course of the second season, gives us an insight into how much she has in common with Karen, and tells us about her other projects.

I’m doing great, thanks for asking! Aside from acting I do a little writing, and right now I’m sitting in a coffee shop working on a short series that I’m really excited about. And by “working on it” I mean I’m checking Facebook and Twitter and generally avoiding working on it. No matter how fun a project is, when I get down to the actual typing it’s like pulling teeth.

The second season of Bloomers is currently airing every Wednesday. What do we need to know about it?

During the first season your character Karen became known for her outrageous one-liners and healthy sexual appetite. What’s it like to play such a wild character?

So much fun! And “play” is the perfect term for it. There is something very childlike both in the way Karen bounces around and her lack of social filters, so when I’m Karen I’m very much playing around and having a blast. The only downside is the look of disappointment on people’s faces when they realize that I don’t act like her in real life. I don’t have nearly as many captivating sex stories and my adventures lean more toward the nerdtastic.

What can we expect from Karen this season? We can see from the episodes so far that she still steals every scene she’s in.

Yes, Karen, much like a tranny hooker strutting into an exclusive country club, always gets a reaction. This season is really exciting because she gets to go on lots of wacky adventures, mostly in reaction to her newly realized feelings for Vaughan. But she also has to work through issues with her sister, Clarissa, and now Francesca, who Karen sees as competition for Vaughan’s affections. She’s also going to wear lots of ridiculous outfits!

It’s two steps forward and one step back with these girls. One minute they’re sharing mimosas, the next they’re pulling each other’s hair out. (Not literally. Or do they?) They’re just like real sisters, really. But, when stuff gets really serious they know they’ve got each other’s back.

Has there been a time yet when you’ve received a script and been surprised at the things you’re going to have to say and do?

Matt warns me before I get the script, so I’m pretty well prepared by the time I see it on paper. I do chuckle when I read it out loud for the first time, though. And the second… and the third. And sometimes it’s difficult to get through the lines without blushing. An episode about pooing out Indian food? Of course he thought of that! Nothing that Matt comes up with surprises me anymore. I’ve come to realize that his imagination surpasses the farthest reaches of the universe, or whatever’s even bigger than the universe. What would that be? Matt would know.

Do you see a time when Karen may calm down a little and fancy settling down?

Deep down I think Karen likes the idea of settling down. I don’t think it would last, though. I think she’d get bored quick. I can see her at fifty, still chasing 25 year olds and having a ball. Maybe married and divorced a few times.

Tell us how you got involved with Bloomers.

I know Matt from Prehistoric times. He’s actually one of the first people I met in LA. I’ve learned to say yes to everything he suggests because I’m either going to learn something amazing or go on an awesome adventure, so when he asked me to be in Bloomers the “Yes!!!” spilled out of my mouth before I even knew what I was getting myself into. And Bloomers has brought both tons of learning and awesome adventures so far!

It seems like the cast get on really well off-screen. Does that help create the chemistry that we see on-screen?

It sure doesn’t hurt! How awful would it be if we were all laughing and joking off-camera and then when the director yelled “action!” we all turned into automatons! That’s a word, right? Like the talking people and animals on Disney rides? Actually, that’s a pretty cool idea. Hold on, I’ve got to go pitch that to Matt for season 3!

I’m really hustling to finish writing a couple scripts this year, ideally this summer. I hope to produce one of them. As far as acting, I usually have no clue what I’ll be working on until it comes up. In my experience it’s been pretty last minute. Someone calls up for an audition or an indie project they want you to do that’s happening the next day, and then it’s over and gone before you know it.

You can find out more about Bloomers by heading over to www.bloomerstheseries.com. Watch the latest episode You’re So Hot below:

Support season 3 of Bloomers on Indiegogo