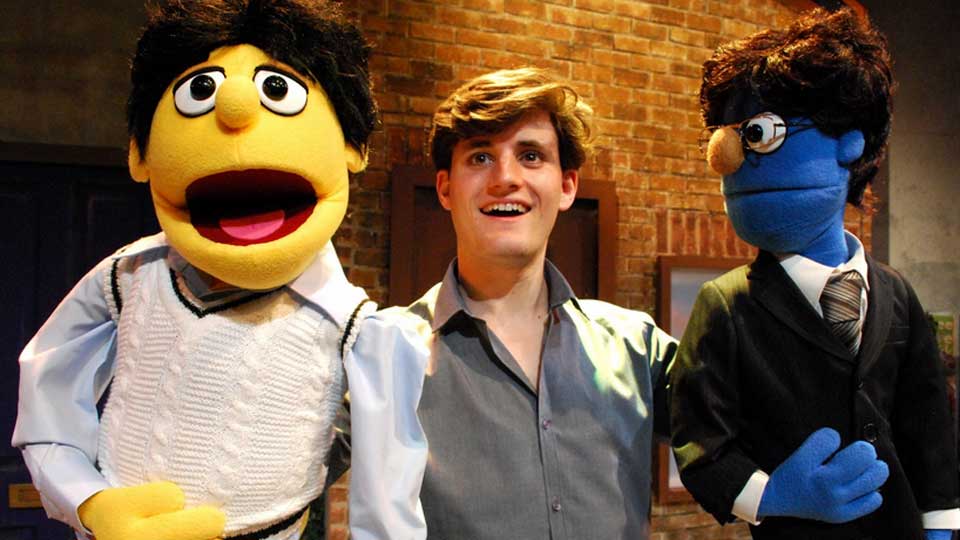 After enormously successful runs on both Broadway and the West End, Avenue Q has a new lease of life at Upstairs at the Gatehouse, the celebrated off-West End pub theatre in Highgate.

For those not in the know, the show is performed by actors and puppeteers simultaneously, with the puppets rendered from the torso up. The momentary distraction of seeing the mechanics in evidence – the puppeteer stands undisguised with the puppet – disappears after the first few minutes. Princeton (Will Jennings) moves into a New York apartment on Avenue Q. He’s young and idealistic, and looking for his purpose in life. Living around him is the couple with the fiery relationship: the Jewish Brian (Tim Frost) and his Japanese wife Christmas Eve (Shin-Fei Chen); flatmates Nicky (Josh Wilmott), a chilled-out everyman, and Rod (Will Jennings again) a highly strung closeted gay republican; and Kate Monster (Leigh Lothian) the school teacher with big dreams who Princeton falls in love with.

With over twenty songs (including a few reprises) sung to a backstage live three-piece band (there’s not quite enough room on the stage to comfortably accommodate the musicians) the music plays an important part of the show, and thankfully many of the melodies are very catchy. You’ll likely find yourself humming a few of the hits on the journey home. The former West End show works brilliantly in smaller environs too. The impressive and commendably simple design sees flats erected to represent the tenement building, leaving a multitude of doorways and windows for characters to emerge from, and the rest of the stage bare. The lack of proscenium arch provides intimacy, and the two banks of audiences at right-angles to one another enclose the action, which has been well-directed to cater for all viewpoints.

The major plus point of Avenue Q is that it is very, very funny. There’s something delightfully juvenile about relishing the sight of two puppets having sex, but aside from the excellent puppetry (and the actors’ facial expressions mirror those of their puppets) the humour runs throughout the witty book too. Some of the jokes are close to the bone – the most notable example being when Trekkie Monster (think of a sex-crazed Cookie Monster) singles out a member of the audience to accuse of using the internet for porn, thus uncomfortably making all complicit. Whilst many audience members will relate to the opening song that wonders what on earth one can do with a BA in English, Everyone’s a Little Bit Racist will notch up the uncomfortable laughter of self-recognition to a whole new level.

The puppetry is mesmerizingly good, and the skill of the performers, who both manipulate the puppets and voice them too is hugely rewarding to watch. Some bad language and sexual references; plus the moral of the piece – that few people have much purpose in life and almost everyone ends up disappointed – may make Avenue Q a less than ideal show for younger viewers (though I’d argue with close attention they’d learn a lot), but I can imagine many teenagers lapping up its joyously unashamed filth and silliness.

The overall story is perhaps a little cluttered. There are a lot of different characters, all with competing wants and needs, and a more focussed plot revolving around Princeton and Kate Monster would probably make for a slightly leaner show. The act one climax is a bit fudged, and coherence of structure isn’t the show’s biggest strength. Some of the jokes are hit and miss too, but thankfully there are enough palpable hits to keep you laughing from one cracker to the next.

Whereas the humour is vulgar at times, this is perfectly justifiable within the context of the show and the world very successfully created on stage. The only questionable aspect is the character of Gary Coleman, based on the late child star, which seems unnecessarily mean-spirited (not to mention a little niche – anyone who doesn’t remember the 1980s or has never seen Diff’rent Strokes, the sitcom in which Coleman starred, will simply be confused). Since Coleman’s early death in 2010 it feels even more distasteful to continue with the characterisation of him. There are plenty of other former child stars who have fallen from grace who could just as easily fit the bill – or perhaps they’d be rich enough to successfully sue?

Those are just a few reservations about what is undeniably a hugely entertaining and funny show. The real success is in the first-rate puppeteers who prove just as capable comedy performers; and the humour celebrating quite a dour but realistic take on life is fresh and original, especially in the usually winsome world of musical theatre. It’s easy to see why Avenue Q has become so beloved. It’s well worth catching again, or for the first time, at its very comfortable new home.

Greg Jamesonhttp://www.gregoryjameson.com
Book editor, with an interest in cult TV.
Previous article
Ghost The Musical comes to Yorkshire
Next article
Once review