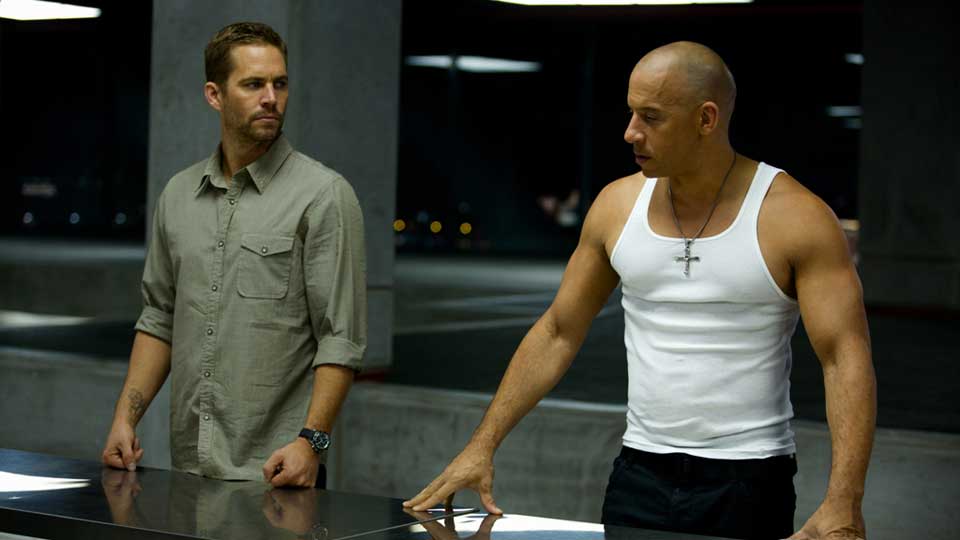 Dominic Toretto (Vin Diesel – Pitch Black) and Brian O’Connor (Paul Walker) are living in Spain thanks to the money they stole from Brazilian mob boss Hernan Reyes. They are tracked down by DSS agent Luke Hobbs (Dwayne Johnson – Welcome To The Jungle), who offers to clear their names if they help him take down a mercenary organization specializing in vehicular warfare, led by former Special Ops soldier Owen Shaw (Luke Evans). Toretto’s elite team travel to London, and set about matching Shaw the only way they know how – at street level but a ghost from Dom’s past returns to haunt him and the team.

The Fast & the Furious films have done spectacularly well to carve out an entire franchise based around people driving cars really fast and street racing. Granted there have been some low points in the series, but Fast & Furious 5 brought it back in line and actually delivered a decent film that had a lot of fun elements to it alongside some serious gun shoot-outs and driving stunts. Fast & Furious 6 sees the old team back together again in an “ain’t broke don’t fix it” type way; the problem is that the writers have taken the epic car scenes and replaced them with sarcasm and a misguided action storyline. Car chases do still exist here, but they are played out so over the top that we couldn’t help but laugh at how preposterous it all was. It’s not very often we see cars surviving so much damage and still being able to burn rubber to chase the bad guys. The loud engines are ramped up to eleven, and they do still sound impressive but what’s the point if you are not going to give us the thrill ride you are teasing? To be fair it’s not just the cars that have a ridiculous role in the film, this time it’s given over to adding a tank and a plane into the mix. Both are hideously shoe-horned into the story and feel completely out of place, especially the plane finale that feels like it runs and runs without any idea of what it should be doing.

The writers have said they wanted to move the franchise away from just being a car culture movie evolving it into a great action heist franchise, and part six was the one to do that yet they have missed one important ingredient – a proper tension filled robbery movie.  The storyline concocted here lurches from one misguided idea to another and each time it moves it to another country without ever explaining itself properly. Each character has about ten minutes of screen time and then disappears off again, only to reappear when required to move the story along. Fast & Furious 6 does have some fun moments in the beginning, and it would have been great to see the film follow the same path as the first half hour. Ludacris and Tyrese Gibson enjoy large amounts of playful macho banter that constantly made us laugh, and when directed towards Johnson’s character it takes on a life of its own to show that they really are a big group of friends. We are big fans of Dwayne Johnson, yet here he is vastly underused and more the butt of the gang’s jokes. It’s a shame to see his macho man talents wasted on such a hammy role.  Also the mid-credits sting is possibly the best set-up for another film we have ever seen – it’s probably the best action segment in the entire film.

Fast & Furious 6 should be a non-stop thrill ride that never takes itself too seriously, but with this (gear) change in direction it has completely lost all notion of what made the franchise so successful. A woeful action script that doesn’t make any use of the characters or the cars, instead it tries to do a witty modern day take on The Italian Job and fails miserably. Sadly this franchise has nothing left in the tank and is running on fumes.