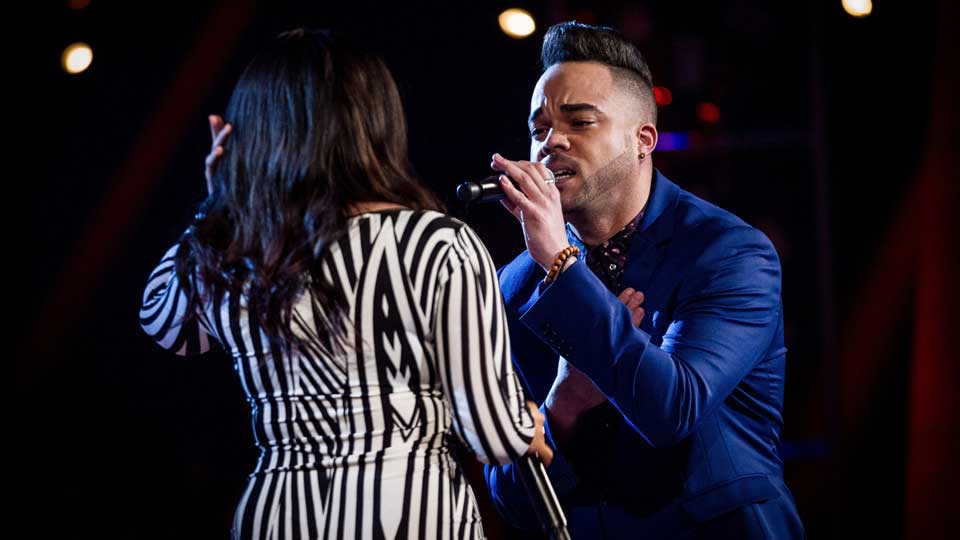 Here we are for the second show this weekend and out first Sunday night. Jessie J, Tom Jones, will.i.am and Danny O’Donoghue have the tough job of whittling down their acts by pitting them against each other two at a time and then choosing only one to stay. They also have the chance to add an extra singer to their teams by stealing one loser from a fellow coach’s line-up. Tom and Jessie have already used their steals so the rejected acts will be making lots of sad eyes in Danny and Will’s directions.

Up first it’s team Will. Leanne, one of our favourites from the blind round, against classical duo Carla and Barbara singing karaoke classic ‘Hero’ this will be interesting. Will refers to C&B as ‘the two headed opera dragon’ not the most flattering of nicknames. Ermm we are not enjoying this – sorry ladies. Jessie said they are all incredibly talented but it was a terrible song choice. In other news Jessie’s hair looks amazing tonight. Will tries to defend his opera ladies and says that he would like to make fresh music with them but he picks Leanne to proceed to the next round.

On to team Tom, he has pitted Cherelle against Elise. They are singing ’All about Tonight’ and Cerys advises them on ‘battle formation’ and demands Elise sings a Tom welsh classic. Poor Cherelle looks down and hopes she doesn’t have to launch into ‘Sex Bomb’ next. We prefer Cherelle’s tone but are shocked when Tom puts her through – we really thought the Silver Bear would prefer Elise! Elise doesn’t get stolen but Jessie thinks this isn’t the last we will see of her.

Jessie pits De’Vide against silky voiced Joseph Gordon-Levitt look-a-like Danny. We really like Danny and hope he does well here despite being the less experienced performer. They perform the Drake hit ‘Best I Ever Had’ and it’s a lovely number – we are entranced by Danny’s puppet dance, he’s super cool! It’s nice to hear the acts working together rather than trying to out sing each other. Danny impressed all the coaches to and Jessie puts him through.

Back to team Will, we have fashion student Leah singing with clapping extraordinaire CJ. They are singing the Michael Jackson hit ‘The Way You Make Me Feel’ (dare we say another iffy choice from Will).  We had a lot of love for Leah’s version of R.I.P but how will she cope with MJ? This is a great battle and Will has a tough decision to make. Let them both stay! Will says he is blown away. Jessie says Leah is the stronger singer but CJ is the better performer. Will crowns Leah the winner! Danny has a chance to steal CJ but doesn’t take it – we think this might have been a mistake Mr O’Donoghue.

Back to team Jessie. Lovely waitress Lovelle and former r&b star Nate James will duet on ‘No Air’ and need to get a bit romantic. Love in a boxing ring!  It’s another good battle but we think that Lovelle performs the song with more emotion. Will says the song choice favoured Lovelle but he and Danny would both choose Nate. Jessie picks Lovelle because she thinks she could coach her better.

The final battle of the night belongs to Danny. The Irish charmer has paired Starry Eyed singing Conor with lovebirds (that squabble a lot) Smith and Jones. They perform Fun’s ‘Some Nights’ and it’s great to have the guitars on stage. We have a big Conor shaped soft spot and we really want to see him through to the next round but either way it’s the best song of the night. Hooray! Danny puts Connor through to the knock-out rounds!

That’s it for the vocal warfare tonight. There’s a week off next week for Eurovision but we will see you the week after for more battle action.