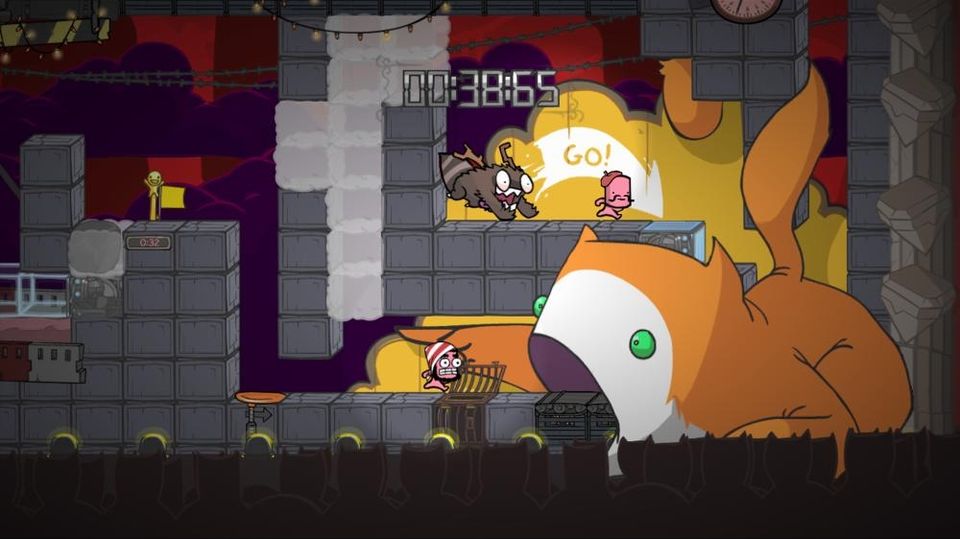 BattleBlock Theater is the latest bonkers game from indie developers The Behemoth (Alien Hominid, Castle Crashers). Fans of The Behemoth have had a long wait for the game which was first announced back in 2009. We took a look at the Xbox LIVE Arcade release to see if it was worth the wait.

The game is a platformer that can be played solo or co-operatively with a friend and it also features a level editor and competitive multiplayer mode for up to four players. At the start of the game the players set sail on an adventure with lots of friends in tow. Hatty Hattington, their best friend of all, also joins them and everything is great until they are hit by a freak storm.

They end up shipwrecked on a mysterious island which is controlled by some technologically advanced cats. Unfortunately the cats aren’t friendly and they enslave the players and all their friends. The cats then force their captives to take part in deadly theater performances for their amusement. To make matters worse Hatty is fitted with a fashionable top hat that seems to possess him. Players must survive each play in order to save their friends and escape the evil cats.

Right from the start you can tell this is a game by The Behemoth thanks to the distinctive comical art style of Dan Paladin. Their previous games, Alien Hominid and Castle Crashers, both used the same art style. The art is bright, fun and filled with humour. Throughout the game there is also a narrator who constantly comments on the on-screen action and often has you laughing out loud.

Before you play you can choose the look of your character picking your favourite head shape, colour and weapon. Initially there is a very limited choice available to you. Adventure mode is the main part of the game and players can tackle it solo or co-operatively with a friend locally or online. Played solo it’s a lot of fun but in co-op the levels change so that players must work together in order to progress. The game should definitely be experienced with a friend as the co-op play brings added difficulty and even more hilarity.

The aim of each level is simply to find a minimum of three gems to unlock the exit. Players who like the extra challenge will want to find all gems on a level as well as a ball of string and beat the level as quick as possible. Some gems are easy to obtain while others require some clever platforming or need you to discover a secret entrance to get to them.

In between levels you can visit the prison gift shop to spend your gems and balls of string. Gems can be used to free your many friends who then become available to choose as your character. There are so many different friends to free and all have funny faces. String can be turned in for new weapons and some are more useful than others.

The campaign starts out fairly simple but gradually introduces different block types. By the end of the game the levels will challenge even the most skilled platforming players. The action is fast and death can come quickly but thanks to the checkpoint system you are rarely punished and only need replay a small section to get back to where you died.

This is especially important as the combat is quite weak and fighting the various enemies can often result in death. Combat is basic and requires simple button mashing to knock and enemy back with a melee attack. Your starting weapon is a throwing disc that acts a bit like a mine but it isn’t very good so you’ll want to upgrade that as soon as you can.

The way the game changes with co-op is clever and forces you to work together. It’s possible for one player to throw the other over large gaps then offer their hand to help their friend reach the same platform. You can stand on the head of another player for them to carry you or boost you up into the air. There are also plenty of puzzles like standing on a button to create a bridge.

As great as the co-op is there is also plenty of opportunity for mayhem and griefing. Working alongside a friend and then pushing them into a pool of water, turning off a bridge over spikes while they are on it or just blowing them up is too much fun. Sometimes it’s by accident, other times it’s on purpose but once it starts you can’t help but fight with each other and it’s great fun.

The multiplayer takes place in the game’s Arena mode. Here are a selection of eight different game types to keep you entertained which are Muckle, Soul Snatcher, Challenge, King of the Hill, Ball Game, Grab the Gold, Capture the Horse and Colour the World. There are also featured levels, random community levels and even community playlists. The multiplayer modes are all quite fun and there is a nice variety on offer. Our favourites were Capture the Horse, Colour the World and Challenge.

In multiplayer you can search for specific game types but it is hard to find games. The easiest way to get into a game is to take advantage of the built in quick match feature. It’s also possible to act as host for whatever game type you fancy. Before a round starts you can visit the prison shop and trade unlocked items with other players if you wish.

Once you’re done with the campaign and exhausted the multiplayer modes there is still more to keep you playing. The Behemoth have included their fantastic level editor allowing you to create and share your own crazy creations. Levels are simple to put together thanks to them being made up of simple blocks. The most dedicated fans are sure to create some fiendishly difficult levels to rival those in the game which will ensure there are always new challenges for you to take on.

BattleBlock Theater was a long time coming but it’s been well worth the wait. The Behemoth have done it again by crafting a brilliant game that is one of the best platformers in recent memory. The generous amount of options on offer from solo to co-op and online competitive play make this excellent value for money. It’s also a game that you’ll keep coming back to thanks to the level editor and community creations. BattleBlock Theater is essential for platforming fans of all skill levels .

In this article:BattleBlock Theater, Platformer, The Behemoth, XBLA