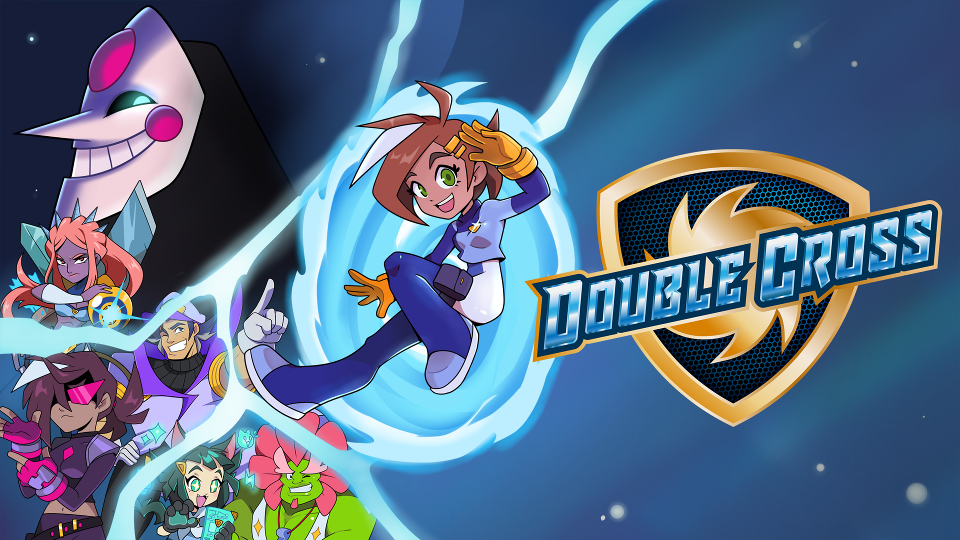 Double Cross takes you into a neat futuristic world of time-hopping through different dimensions. You play as Agent Zahra Sinclair, working at the ultra cool R.I.F.T. (Regulators of Inter-dimensional Frontiers and Technology), keeping time and space safe from devastating paradoxes. All is well until a masked figure appears and swears to destroy the peace that R.I.F.T. upholds in a nefarious plot. The twist is that it’s someone that works from within the Agency and it’s your job to suss them out and make things right again!

Double Cross uses a neat mechanic of taking your Proton Slinger and doing just that–shootin’ that sucker at energy points to get you moving around the screen and grabbing objects out of the air to lob them around! Time slows down enough to line up the shot and bam! There you are, flying through the air like a fabulous futuristic trapeze artist. It’s a move that’s heavily relied on in each level, from just getting around innocuously to the boss fights. Speaking of boss fights–Double Cross offers us a good few of them of mega proportions. Wily mechanics unique to every boss, you’ll never feel like you’re doing the same fight twice. They can be a bit on the tough side, yet predictable, but what good boss fight isn’t?

Aside from the neat mechanic of having the Proton Slinger, you also have a few punch and kick moves that have been compared (pretty accurately!) to Mega Man X. In fact, the way you move through levels feels extremely reminiscent of Mega Man–vertical wall climbs, platforms with different properties, and plenty of enemies in the way of it all. There’s also a really handy heal feature that consumes energy that the enemies drop–so use it wisely, and Zahra will be fit as a fiddle through your entire adventure.

The whole of the action is mixed with a equal ratio of storytelling. Fortunately, the characters are adorable and the animation is immaculate, otherwise at some points it might be hard to get into. The animation in the story cutscenes play out in the style of a visual novel, so depending on how much you enjoy those, this could either greatly improve the game as a whole, or knock a point off. The cool thing about the storyline is that you can take on the levels in your own order, giving a personalised experience only to be matched by various endings tailored to your choices. The animations are fluid and well done, matched with how tidy the sound design is from the background music to the effects that detail everything. It’s a polished platformer that’s unique and tons of fun to play.

View some Double Cross screenshots in our gallery:

If you like a good jaunt through a platformer and are looking for a unique twist on the whole genre, I can’t recommend Double Cross enough. There’s never a dull moment from the varying level design to keep you on your toes, to the fun and well-told story that dots along the way. It’s not hard on the eyes and good for any age that has a decent set of reflexes on them. Now–it’s up to you to solve this who-dun-it and make the dimensions super safe and protected once again!

Double Cross was reviewed using a digital code supplied by the publisher.