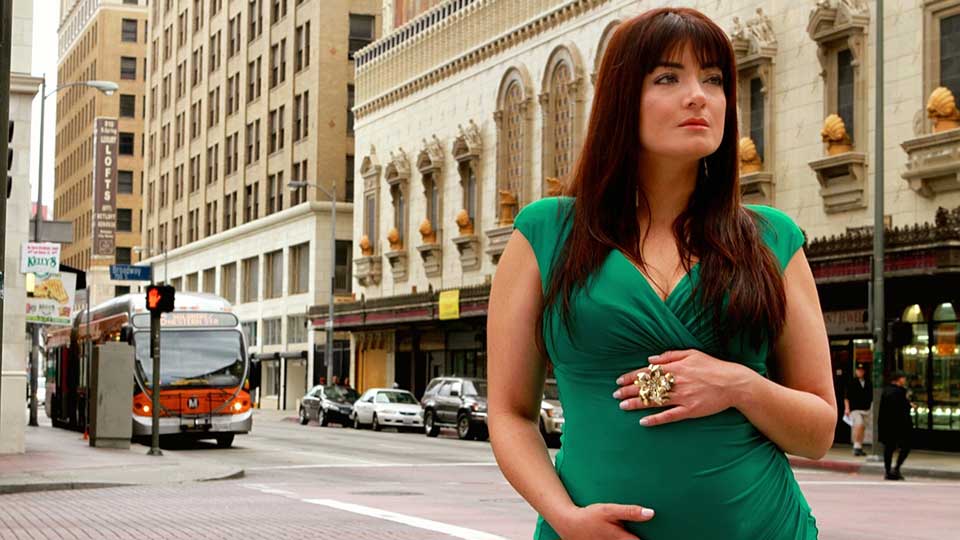 Bloomers debuted the first episode of its second season last week as we caught up with Francesca (Fernanda Espindola), Brooke (Matt Palazzolo) and the gang following the first season finale.

The web series has been going from strength-to-strength winning critical acclaim and a loyal fanbase. Later today the second episode of the new season is due to premiere.

Ahead of the episode we caught up with Fernanda Espindola who plays Francesca in the show. At the end of season one Francesca was pregnant and unsure who the father was. Will she find out in season two? Keep reading for all the gossip on Bloomers season two.

Bloomers season two started last week. Tell us what we can expect from the new season.

Our goal for season 2 was to use season 1 as a starting base and push the envelope. Our characters, as well as our actors, were pushed much further – emotionally, physically and, well, comically.

Francesca had a bit of a rough ride in the first season finding out that she was pregnant and not knowing who the father is. What does life hold for her in season two?

Season 2 finds Francesca trying to figure out what to do with this unexpected pregnancy, while trying to keep a normal life! You will finally meet her ex-boyfriend Ryan (a guest star I’m sure the audience will love to see), one of the possible baby daddies. And once we find out who the father is, then the two of them get to navigate this new, unfamiliar world.

In what ways are you and Francesca similar?

Well, I’m not like her in the way that I’m not pregnant! But we both do like handsome boys! Kidding aside, I guess what’s similar about the two of us is that we always try to keep it together regardless of how messy life is. We’ll pretend everything is fine until it comes crashing down on us!

How did it feel to be back with the cast filming a brand new season?

It was so great to get the gang back together. It had been a while, but we didn’t miss a step. And it was exciting to see the new cast and crew members seamlessly join our Bloomers family. We have the best time working together. And, hopefully, that translates into the episodes that are about to come out.

As well as starring in the show you executive produce it too. Tell us a bit about what that entails.

Producing an indie is a very creative endeavour – you’re trying to get all your ideas done for the budget you have. There’s no extra cash lying around, so you’re always debating what you really need versus what you would like but can do without. But producing Bloomers has always felt like the pieces just fall together. And even when they fall apart (we lost locations, lost actors, had to deal with the weather, etc), we dig down and find a way to get them back together. The tricky part is when you’re on set and you’re wearing all the hats at the same time. But that’s the thrilling and challenging part of producing a project in which you also star.

You’ve got a great chemistry with the show’s creator Matt Palazzolo on and off screen. What is it you love about working together?

Well, what’s not to love about Matt? He’s brilliant, talented, funny, generous. And our chemistry just came naturally. According to “outsiders,” we speak in a type of short-hand where we understand each other and complete each other’s sentences without much effort. Even when we argue over something, it’s not really an argument, because we’re laughing as we do it. We spend a lot of time together, and most of the time we laugh our butts off. How many people can say that about their partners?

How do you feel about the reaction to the show’s first season?

Honestly, I was blown away. We knew we loved the project, but we didn’t know how it would be received, and it was so humbling to see all our friends respond so well. Then some new friends found us and we received great feedback from outlets who seemed to really like us. I felt so grateful, and a bit like Sally Field!

What are your hopes for the future of Bloomers?

We will definitely keep making more – season 3 is already being discussed. Now we would really like to compensate all our talented cast and crew, who have stuck by us and given so much to the show, so we would love to get some good funding next time around. And, who knows? Maybe television? I know I am biased, but I do believe Bloomers would be well accepted on the small screen.

What other projects are you working on this year?

I’m in the process of doing research for a feature I want to write. And a friend of mine wrote a short film I’m planning on directing this year. I also have a small part in “Real Heroes,” the same movie Matt stars in, which might come out this year. And then there are all the projects that might still come this year – as an actor, I’m always looking for the next gig!

The second episode of Bloomers Season Two will debut later today. For more information head over to www.bloomerstheseries.com. Check out the episode 2 trailer below:

In this article:Bloomers, Fernanda Espindola