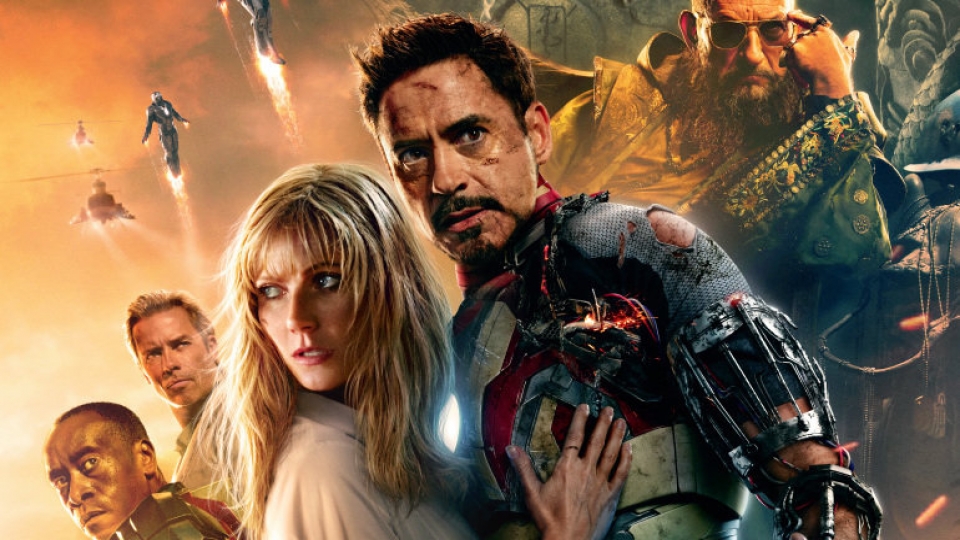 Tony Stark (Robert Downey Jr.) is having panic attacks after the events in New York, staying at home creating new Iron Man suits rather than going to Stark Industries. It’s left to Tony’s partner Pepper Potts (Gwyneth Paltrow) to continue to run the company. However, when the mysterious villain calling himself The Mandarin (Ben Kingsley) starts a series of bombings and terrorising the world, it’s left to Tony and his partner Col. James Rhodes (Don Cheadle) aka The Iron Patriot to find out what The Mandarin’s plans are. But soon the evil nemesis takes something from Tony that makes it all the more personal. Can Tony Stark come back and save the day? Or is the iron suit just for show?

Iron Man 3 makes up the trilogy of one of Marvel’s biggest blockbuster film franchises, however with Avengers Assemble making trucks loads of cash last year it means that any Marvel film has to up the ante bigger than every before. This film sees Jon Favreau step aside in directing duties and in place comes Lethal Weapon writer Shane Black, who had previously worked with Robert Downey Jr. in the excellent Kiss Kiss Bang Bang. Black knows how to write buddy comedies with such style, and here he continues that trend and that’s actually what makes the film work on a basic human level. Downey Jr. has so much charisma and style that he makes the perfect folly as Black’s Tony Stark – witty, sarcastic and incredibly smarmy. The jokes come thick and fast that at times it feels more like a straight up comedy than a superhero movie, and this is where the film seems to lose what it previously had built up. There are just far too many witty quips and sarcasm for us to keep up, and it becomes rather annoying after a while. The final third of the film plays out as if it could be a new Lethal Weapon film, as we see Stark and Rhodes running round with guns– Riggs & Murtaugh mark II. We wanted to see them don the suits and then go all out against the bad guys, but this never seems to happen.

Downey Jr. is Iron Man, and there isn’t much change in his role here. However, we get to see more of Col. Rhodes and what is now making his Iron Patriot so useful to the government and for protecting citizens in general. Don Cheadle actually gets some great moments here and shows that he can do action all too easily, if only he would do more. The standout person in the film is Sir Ben Kingsley as The Mandarin; it shows how diverse an actor this guy is and why he has always been one of the leading actors for all these decades. Guy Pearce as Aldrich Killian is vastly underused and seems so far off his normal acting style that he gets lost in the rather bizarre angle that his character is meant to be pushing for. Sadly Rebecca Hall is woefully miscast and underused as one of Killian’s work colleagues Maya.

Iron Man 3 works perfectly fine as a stand alone film, but as part of the trilogy of the big Marvel superhero movies it seems way off base. Black’s direction makes it more comedy than action, and for that we were disappointed as with any super hero movie it’s about seeing them become the transformation and go all out against the evil in the world. Iron Man 3 can’t seem to find the right suit to wear at any point during its run time, instead we are treated to glimpses of the film that should have been.