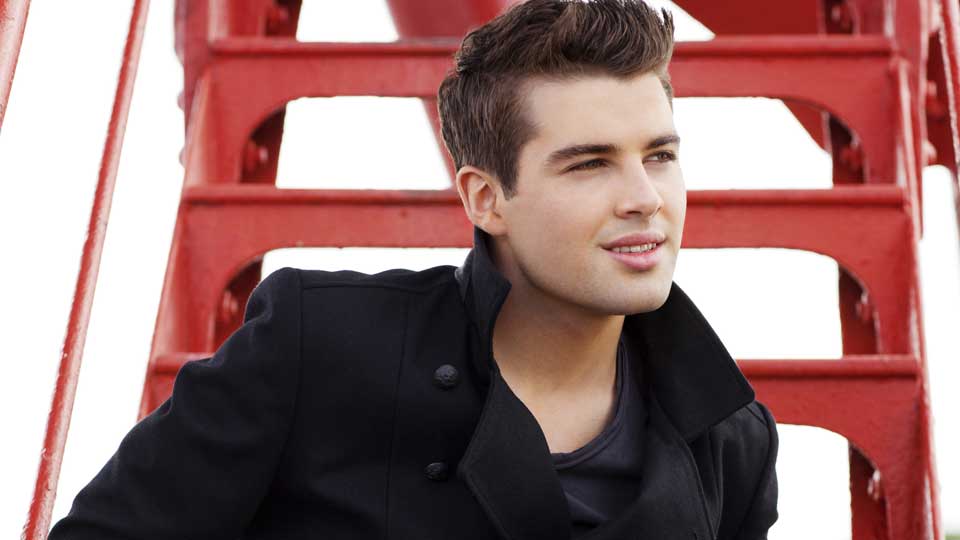 The last time we saw Joe McElderry he was gearing up to take on the star role in a one-night-only production of classic rock musical Tommy.

The X Factor winner has enjoyed a varied career since winning the show in 2009. He’s released four albums, won Popstar to Operastar and starred on the West End stage. For his latest venture he’s team up with the Royal Mail Choir for a charity release of Abide With Me.

We had a chat with Joe to find out all about the single, talk about how he got involved and find out what he’s been working on in the studio.

The last time we saw you, you were days away from Tommy. What have you been up to since?

Tell us about Abide With Me. How did it all come about?

I’m just hoping that everyone will get behind it and support it. It’s such an important cause and it’s not a very highlighted type of cancer. It’s not well-researched and people are quite embarrassed to talk about it. When I heard it was going to be for this cause I jumped aboard. Being a young male you never know when I’m going to need this kind of charity. I think it needs to highlighted and some awareness raised about it.

Have you had any experience with family or friends that have had prostate cancer?

I’ve done a lot of stuff with cancer charities before and visited wards when I’ve been touring. I’ve seen how it affects people and I’ve seen friends of friends’ family members that have suffered from it. It’s a devastating disease and affects much more than just the individual going through it, which is bad enough. It affects so many other people.  These kinds of charities provide help and support. It’s a really great cause. I’m always of the mind that if I can help and use my profile for something then I’m always willing to do it if it’s possible.

Why did you decide to record Abide With Me?

Royal Mail had already selected the song. They were interested in me vocalling it. Abide With Me is such a timeless song and the lyrics are really emotional. It makes people feel something when they hear it whether that be patriotic or some kind of emotion. The lyrics are very emotional. It’s been used in huge sporting events. It’s a well-used song. It’s fitting to use it and raise awareness for this cause as well.

You mentioned that you’ve been spending a lot of time in the studio. What kind of sound have you been working on?

I’ve been working on some stuff that I’ve not done for a while. I’ve written some dance tracks, a few uptempo, a few midtempo poppy tracks. I’ve written some ballads too so it’s been very varied. I’ve written about three or four songs that people wouldn’t expect to come out from me and that’s quite exciting. I’m just hoping that everyone will get to hear them. I’m going to take them in to play to the label and see what they think. It’s been quite nice to get back in there and do some stuff that’s not expected.

Is it nerve-wracking when you have to play your songs to the label?

It’s a working relationship with the label. I can take anything in and we bounce off each other so it’s a matter of opinion. I get nervous playing my music to anybody. You can spend a lot of time playing it to a select three or four people around you. I always get nervous when I hear my song on the radio because you never know what people are going to think of it. You spend so long working on it that you get protective over it. When I go to the label I have to distance myself from the song so I can constructively pick at them and make them better.

You said before that you’ve been doing a lot more songwriting and last time we saw you, you mentioned you wanted to do more of that. Have you been getting stuck in?

I’ve been writing since January this year. I wrote a lot for the album and I’ve been really getting into it. I was in the studio yesterday doing some and I was in there last week. I’m always writing and I’m one of those people that sits on trains, planes or wherever I’m travelling singing into my phone. People must think I’m a right idiot! (laughs)

Let’s talk about your experience with Tommy. How was that for you?

It was probably one of the most stressful things I’ve done because we had such a short amount of time due to my schedule with the album. All-in-all I had about two and a half week’s rehearsal. I was doing shows then racing back to London to do rehearsals. I had to learn a full musical in two and a half weeks so it was the most stressful ever. I had one of the best times though. The music is so epic with the band. The cast I worked with was incredible. I was lucky to be on stage with them all. It went down well. I was nervous what everyone was going to think about me playing a rock hero (laughs) but it seemed to go down well.

It just showcases your versatility, something you’ve done throughout your career so far…

Yes. It was a big role to take on because the only other person that’s done it, and made it huge, was Roger Daltrey. Roger and I have very different singing styles so it was quite a challenge for me to take it on and make it my own. The director I worked with was great and it turned out really well. We got some great feedback on it.

Has it given you the itch to do anything else on stage?

Definitely. If the role was right, and the timing was right schedule-wise then I would definitely do something. There’s something about being part of a cast that’s really special. I’d never felt that kind of gel on stage before. I’ve got my band, and we’re great friends having a blast on stage, but there’s something about being on stage and being in character with that many people. It’s a great feeling.

Moving back to your charity single with the Royal Mail Choir, why should people go out and support it?

I think the song is a great song. This is not a fun song; it’s for a serious cause. One man dies every hour due to prostate cancer and 1 in 8 men will get it. It’s a huge deal. It’s not anywhere near as highlighted as it should be. I’d urge everyone to get this single and help highlight the cause and raise money for this charity.

Abide With Me by Royal Mail Choir with Joe McElderry is out now in aid of Prostate Cancer UK. Watch the video below: