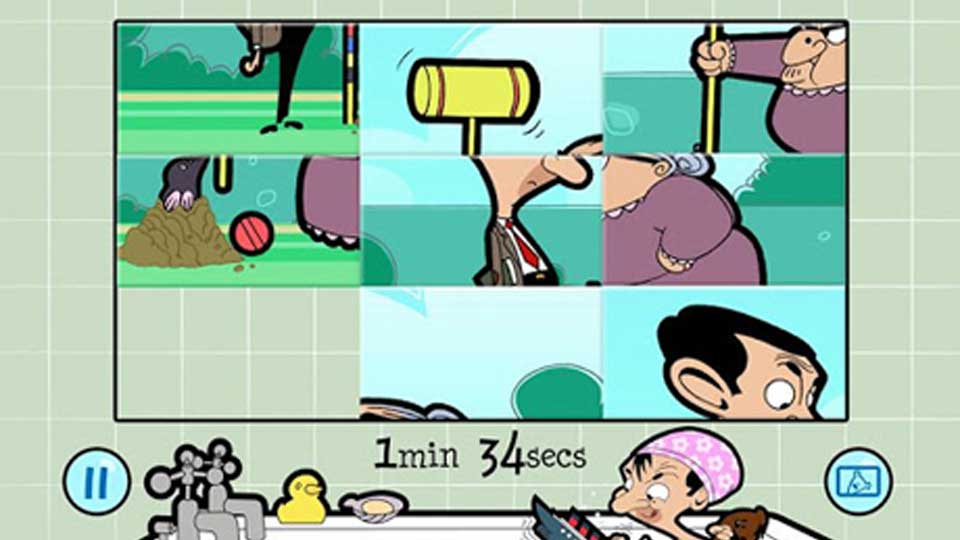 Mr Bean’s popularity is still strong which is incredible if you consider that he’s been around for 23 years. In that time the character has enjoyed a live action series with Rowan Atkinson in the title role and a spin-off cartoon. There have also been two movies, several books and Mr Bean was part of the 2012 Olympic Opening Ceremony. Now Mr Bean is moving into the app market with the release of new iOS game Mr Bean Slider Puzzle.

Mr Bean Slider Puzzle is an incredibly simple but wonderfully effective idea; much like the character himself. Players have to choose between six themed categories – sport, animals, music, food, transport and teddy – which each contain six different slider puzzles. All of the pictures are from the official Mr Bean animated series so players old and young will find plenty here to enjoy. Once you’ve picked a picture you can then choose your difficulty. There are four levels to choose from – 3×3, 4×4, 5×5 and 6×6.

The easiest way to start is by choosing a 3×3 but believe us when we say this will likely have you scratching your head as you try to solve the puzzle. The touchscreen interface is simple and all you do is move the tiles around with your finger as you try to assemble them in the correct way. You can use a hint to revert back to the completed picture so you know what you’re trying to recreate. You’ll definitely need this in the higher difficulty modes.

Each time you start a new puzzle you’re timed and there’s an addictive fascination with repeating puzzles to try and complete them quicker than your last attempt. Mr Bean Slider Puzzle is also integrated with Facebook, Twitter and email so you can share your achievements and times with your friends.

Visually the game looks great. Using the animated Mr Bean is a stroke of genius as the visuals leap off your iOS device. We used the iPad and the game looked simply wonderful.

Mr Bean Slider Puzzle is a fantastic, addictive and frustrating game. If you have a competitive streak then you’ll be unable to put this down. The game is suitable for gamers of all ages and types. It took us back to the days when you could actually get slider puzzles with a plastic ring to put in the missing tile spot so the titles didn’t move around or fall out. We think we prefer having them on our iOS device and Mr Bean Slider Puzzle is ridiculously addictive.

In this article:iOS, Mr Bean