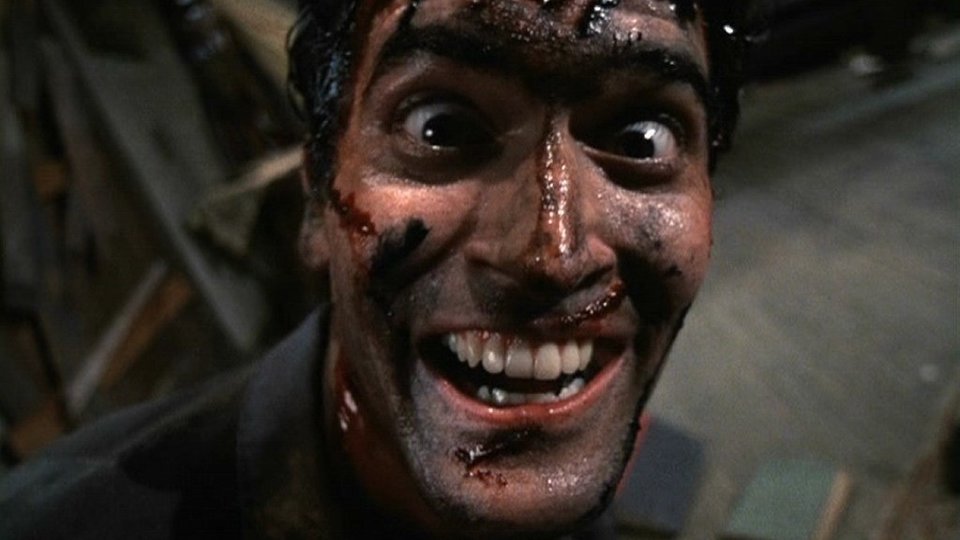 Young lovers Ash (Bruce Campbell – Bubba-Ho Tep) and Linda (Denise Bixler – Crisis In The Kremlin) happen to come across a remote cabin in the Tennessee woods to spend the night in, and they are joined by some of their friends. After finding a mysterious book of the dead, they inadvertently summon up forces of evil that possess Linda and then go for Ash. However, he’s not going to let that happen and with the help of a chainsaw he fights back against the evil demons that have possessed his friends.

Evil Dead 2 is not so much a sequel to Evil Dead, but more of a remake of the first film. Director Sam Raimi went back to his original story and, due to having studio financial backing now, he decided to make it a bigger version. However here they removed most of the gore that accompanied the first film so they could get a lower classification rating, but because it was so mental it still received the same rating as the original film.

Fans of the original might find the lack of gore slightly disappointing but there are touches of horror that are thrown in though. Legendary horror make-up artists Robert Kurtzman & Greg Nicotero cut their teeth working on this job, and what a job they did. Some of the best possession scenes are accompanied by some amazing make-up as they change into demons. We couldn’t help but be awestruck by the quality of the make-up used here. Hands are cut off, eyes pulled out and plenty of blood is thrown around, but none of it looks low budget or cheesy, rather advanced for it’s time. Raimi knew what he wanted and he hired the best to achieve that, and it very much pays off.

If there was ever a film that is held together by one actor, then Evil Dead 2 is that film. Bruce Campbell, as Ash, in the lead role completely carries the film from start to finish. He knows when to ham it up and then when to take a serious turn. There are scenes that are reminiscent of Laurel & Hardy type slapstick comedy. Ash suffers so much physical damage that it would kill off most other people within minutes, especially as the horror begins from the start and never stops.

There is never a moment that Ash gets to breathe and relax much like the viewer; instead he is constantly moving to survive. The scene where he has to use the chainsaw on himself is funny and gory all rolled into one and then once he strikes up the chainsaw then all bets are off and the film becomes a blood-letting  full on assault of killing that doesn’t end until the closing credits. This is the film that made Bruce Campbell such a horror icon, it’s his film and he deserves all the plaudits.

Evil Dead 2 may not have the down and dirty grittiness of the original, but it adds more gore and plenty more humour to make it stand up on its own. Campbell excels in the lead role, and with buckets of blood and dark humour Raimi set the standard for horror/comedy with this film.