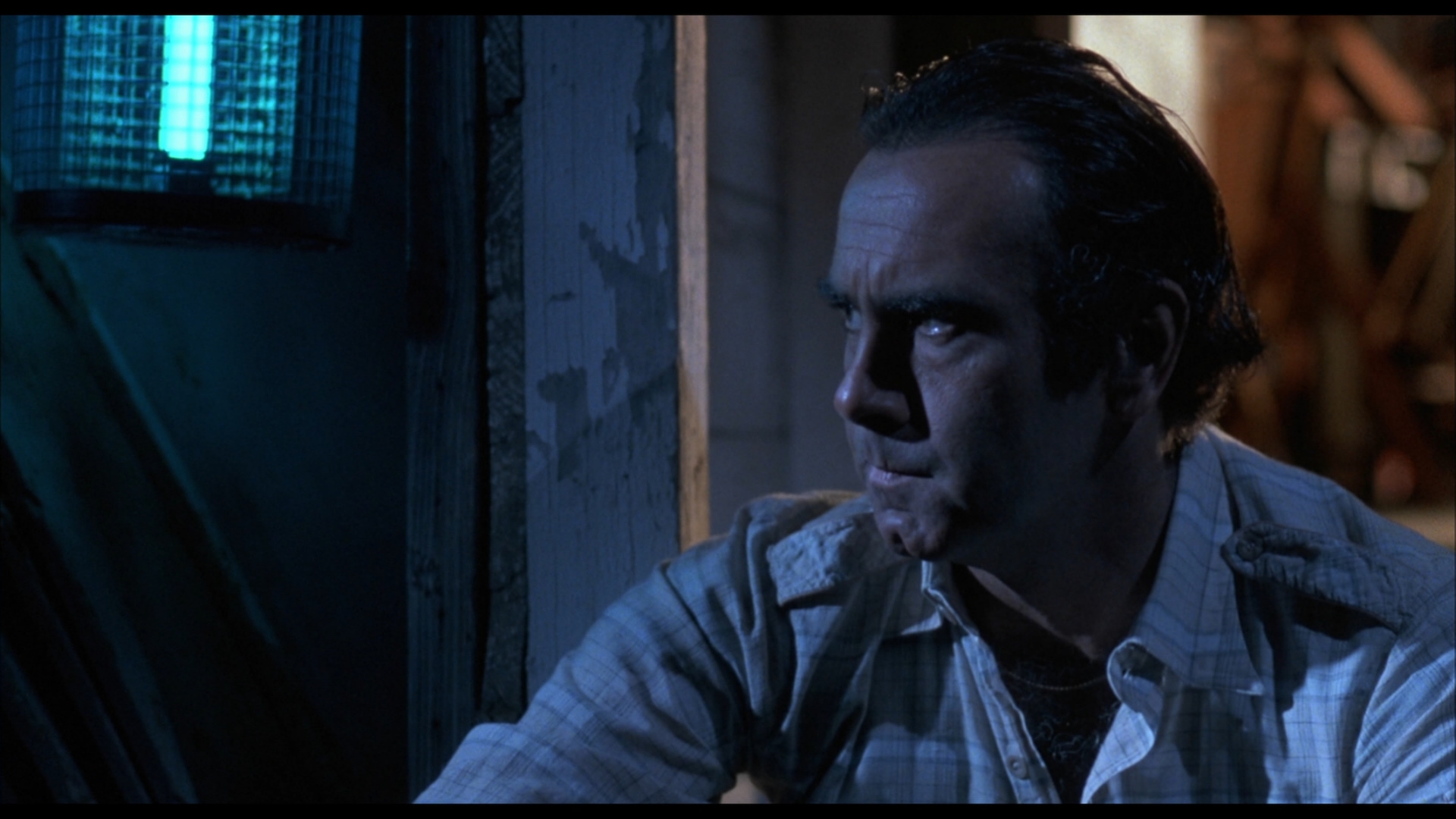 Abby (Frances McDormand – Fargo) is married to bar owner Marty (Dan Hedaya – Mulholland Drive), but is cheating on him with Ray (John Getz – The Fly), one of the bartenders. Marty eventually uncovers their sordid affair and becomes so enraged he hires a Private Detective named Visser (M. Emmet Walsh – Blade Runner), an unscrupulous person, to kill them both. Yet unknown to Marty, Visser has plans of his own that will see him become rich. Soon everyone is involved in lies and deceit that can only end badly for them.

Blood Simple is the first directorial film from Joel Coen, aided by his brother Ethan on script duties. It’s also the film that brought them to the attention of the Hollywood bigwigs, and have since gone on to make some exceptionally wonderful and crazy films. But this is where it all started, and the film shows that the Coens had their style down right from the beginning.

This movie is very much a slow-burner of a noir crime thriller that you have to stick with to fully appreciate how great a film it is. There are twists and turns at most points just to keep us guessing, and whilst we may have seen most of these types of films a million times before it’s a testament to the Coens for making it feel fresh and vibrant with Blood Simple.

Most of Blood Simple is shot in vast areas of the desert, giving it a wilderness feel to the proceedings. Yet this is where most of the proper action takes place, we see quite a lot of explosions and killings on the desolate, empty roads that all work their way into the thriller elements of the movie. The paranoia shown by most of the protagonists certainly racks up the tension as well; you only have to continue to see how scared Abby gets by wondering if Marty is dead or alive.

We must mention the quality of acting from Frances McDormand in Blood Simple, as it shows what great range she has and why she has gone on to become a staple in the Coen films (apart from marrying one – which helps). She certainly makes this film more open for the audience; it would be a whole lot bleaker if she wasn’t around.

Blood Simple’s cinematography is wonderfully done by Barry Sonnenfeld (who later went on to become a director). It’s vast shots of the Texas landscape look bleak and gritty, but it truly pops off the screen by the final act as all bets are off as to what we are about to see. Considering the level of budget for the film, it really looks like a Hollywood style film rather than an indie project by some first time director/screenwriters.

Strangely, the director’s cut of Blood Simple is three minutes shorter than the original version. Here the Coens went back and decided to take out some of the extended shots in the film that they thought slowed the pacing down. We have to say that we didn’t notice the pacing had changed at all.

Blood Simple is a low budget crime thriller that has many twists and turns throughout, yet with a tight script and some excellent acting throughout, it makes the film a little indie gem that shouldn’t be missed.

Advertisement. Scroll to continue reading.
In this article:Blood Simple