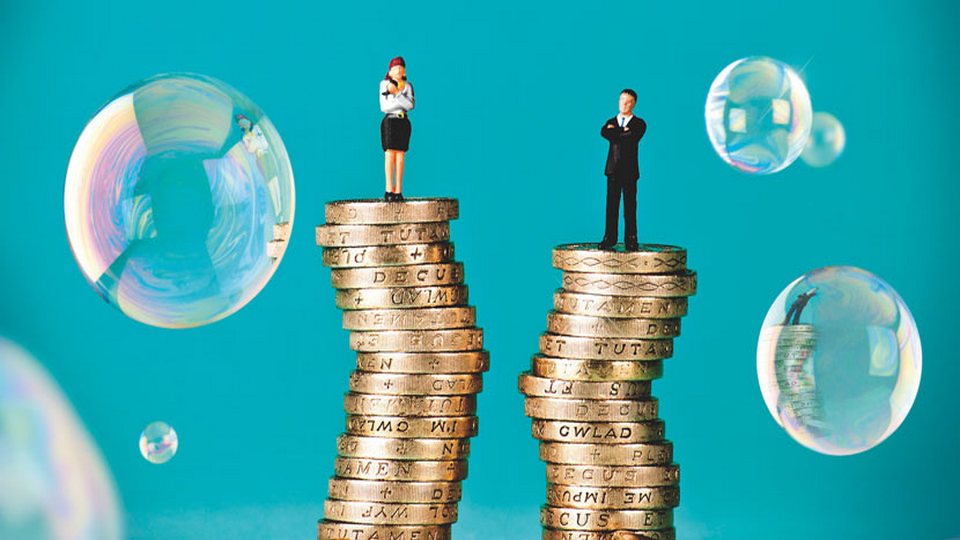 Unlimited Theatre brings Money The Game Show to the West Yorkshire Playhouse this April, promising a unique theatrical experience where 10,000 pound coins are up for grabs.

The performance begins unconventionally as two hosts, Queenie and Casino, gather ticket holders in the foyer space. Dividing the audience into two competitive parties for independent performances, the evening begins with demonstrations on the value of the subject of the night: Money. After some prep talk and motivational rallying, the divided audience are ready for blood and to do battle in the performance space.

Queenie and Casino are ex-hedge fund managers who have lost their wealth and have turned to performing arts to stake a gamble on £10,000, piled in pound coins on the stage and overseen by an ever-present security guard. Queenie has a long history in finance whilst Casino is something of a genius with numbers, predicting a crash which Queenie must either report to her fat cat seniors, or use to a mutual advantage with Casino. The story unfolds in momentary flashbacks whilst the game show rips along. We are assured that whoever loses will kill themselves, so no pressure on the audience to succeed…

Games include demonstrations of unique skills, balloon inflating and bubble blowing, all in the cause of doubling the balance. Always entertaining and occasionally riotous – one lady decided to cheat causing outrage for audience and actors – the game successfully brings out the blood-sport fury of greed and competitiveness in every spectator.

Money The Game Show has an electricity about it thanks to the rabble-rousing odds it sets the audience through each gamble. Even the most persistently conventional theatre-goer will find themselves stamping their feet and cheering, as viewers become part of the story and are invited to pitch shots at doubling the balance and raising the stake. It is all subversive, of course, demonstrating how money – simple tokens of exchange – brings out the capitalist glutton in us all. The show demonstrates tangibly that greed is infectious, and it is a similar complicity that allows the farce of currency to be perpetuated; as long as we all continue to play the money game.

Clare Duffy directs her own script, which is both fresh and irreverent, topically analysing the economic madness of the past five years. The dramatic element is strong and embraces an sense of metaplay within the game show, balancing the camp of the game with the dry satire of the drama. Duffy’s direction is also constantly inventive, utilising simply orchestrated effects which transform the gambling arena into the harsh environments of boardrooms and offices. Dramatic interludes throughout the game provide a much necessary reprieve from the rage of the gambling sessions, whilst the games themselves feed an energy and intensity into the show which maintains a constant dynamism. Perfectly balanced, Duffy has succeeded in producing an interactive performance which is immersive and engaging whilst also creating a dramatic intensity that sends a powerful message.

Lucy Ellinson and Brian Ferguson are a striking force as Queenie and Casino. Ellinson’s performance has the air of a young Patricia Hodge who is bitchy but lovable, whilst Ferguson’s Casino is a charmingly aggressive rough diamond. The relationship between the two is outstanding, no doubt cultivated over many rehearsals and workshops. Not only are these well rounded characters and performances, but tangible personalities with depth, charm and an edge of danger.

A poignant critique of the 2008 financial crisis and a self-questioning attack on the value of currency, Money The Game Show is both fun and fascinating. It is as if theatre has met the funfair, with a wackiness and hilarity which lightens the mood of a subject which is, ultimately, relentlessly bleak. Whilst some may find the whole thing alarming and disorientating, most will discover it’s like nothing else on stage today and well worth the gamble.