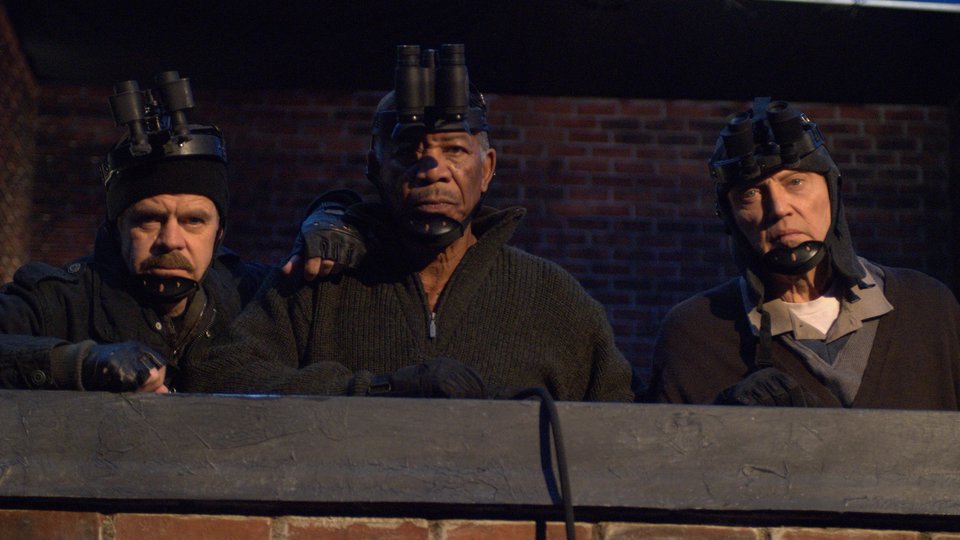 Charles Peterson (Morgan Freeman – Bruce Almighty), Roger Barlow (Christopher Walken – Seven Psychopaths) and George McLendon (William H. Macy – Fargo) are honest security guards at the Boston Art Museum, but when they learn that their favourite art pieces have been sold to a Danish museum they set about joining forces to prevent this happening. They concoct a plan to switch the real masterpieces with fakes, but not all goes to plan all of the time, especially when Roger’s wife has been promised a trip to Florida and George keeps taking his clothes off in front of the warrior statue.

The Heist was made several years ago and is only now getting a full release, which is normally never a good sign of the film’s quality, but this one eschews that and is actually rather fun.

All three lead actors look considerably younger than we know them to be, and all give the type of established performances we know they can deliver. Walken is the typical neurotic guy that he plays so well in other films and Freeman goes completely against his type and is the basic and simple guy in the group. Yet it’s Macy who gives the best performance, his macho bravado-exterior is the opposite to when he keeps taking his clothes off and falls in love with the statue – also he looks in really good shape! We can just imagine the fun these three guys had making this. All of them give as good as they get and it makes for laughs and constant smiles when watching.

The Heist doesn’t have the most integral of plots; in fact it’s all too basic as there is no second-guessing or changing of ideas. Instead it’s a straight up comic caper. Sadly this is the main thing that lets it down as it could have been so much more. With such funny performances from the three leads, we wanted the film to kick on and go all out for over the top slap-stick laughs, but it never gets above the same tempo set in the first 30 minutes.

Ideally it could have been the OAP version of The Thomas Crown Affair; sadly we don’t see that here. Also the several different endings don’t help proceedings – they have a great ending but then add a couple more onto it afterwards and it makes it feel like the director didn’t know how to finish the film. He just threw all the ideas into the film.

The Heist certainly has huge pedigree in its three lead actors, each of them giving a good performance and adding something different to each role. They certainly are able to show their comedic chops in this film. Sadly the pretty basic script and direction lacks kick. The Heist is in the inevitable situation of being just above ‘straight to DVD’ but slightly below ‘theatrical’ release. It’s the type of film we would gladly watch by chance and the perfect Saturday afternoon comedy no-brainer.

In this article:The Heist