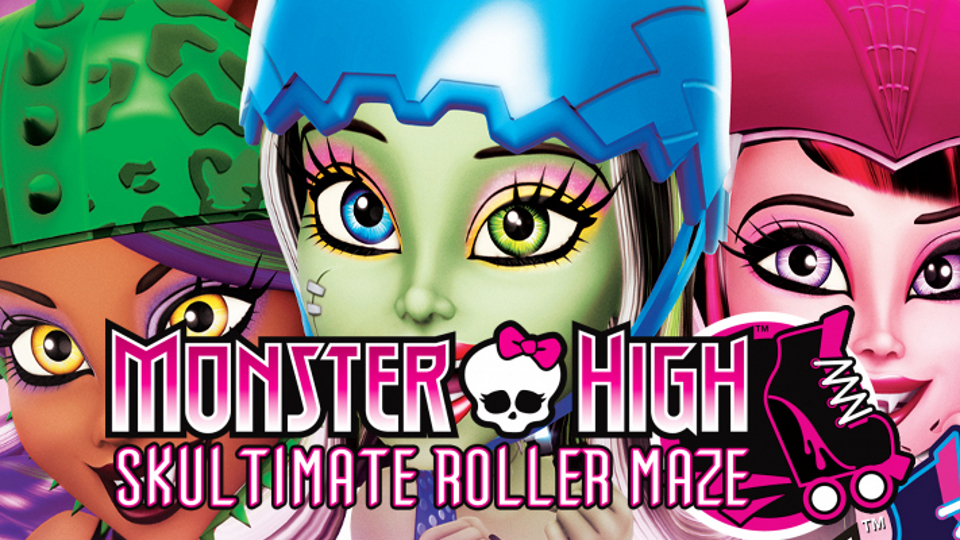 Monster High Skultimate Roller Maze is a roller-skating racing game based on the popular Monster High dolls from Mattel. The game is developed by Game Machine Studios and published by Little Orbit. It has previously seen releases on Nintendo Wii and DS. I reviewed the 3DS version with the help of my 10-year old daughter Jessica who just happens to love Monster High.

At the thought of playing a new Monster High game she was really excited until she found out it was a racing game. The game is well presented and makes good use of artwork of the Monster High characters and the depth of the 3D screen. The main menu can be controlled via the face buttons or the touch screen and allows you to jump into racing, change the options, view your unlocks and track records.

The game features eight different tracks to unlock based on themes from the Monster High cartoon series these include Scaris, Monster High Stadium and of course Monster High School. Previous versions of the game only featured six tracks so it is nice to see the developers have put some extra effort into this version. There are twelve different Monster High characters to unlock who are inspired by famous monsters and characters from the movies. Fans of Monster High will recognise their favourites such as Frankie Stein, Clawdeen Wolf and Draculaura. Male characters are also represented such as Deuce Gorgon and Heath Burns.

Jumping into race mode presents you with four options which are Circuit, Relay, Quick Race and Timed. Circuit is a series of races with points awarded for your finishing placement and relay is a set number of laps using a different character for each. Quick race lets you choose a single track to race on and timed puts you up against the clock.

Before you start there are three difficulties to choose from spooky (easy), creeparific (medium) and scarifying (hard). Games aimed at children usually try to teach something in particular and here its teamwork and celebrating people’s differences. Races are all run in teams which comprise of a captain and two teammates. Players get to choose each of these before a race begins allowing them to build their favourite team.

Characters are divided up into three classes of Light, Medium and Strong which reflect their speed, agility and strength. Light racers accelerate faster but are easy to knock down, Strong racers are slower and struggle on bends but are much tougher while Medium racers are the most balanced. The choice of captain influences the stats of your teammates.

Races are setup in a similar style to Mario Kart where you must perform a set number of laps and finish first to win. During races you come across coffin’s which act as powerup containers and there are also speed boost pads. The difference to most racers is brought in by the team element. As you race your skater has a stamina bar which slowly drains. Before they run out of stamina you need to swap to another skater or you will slow down to a snails pace.

The courses are standard race track layouts but benefit from Monster High themes. For example Scaris is based on Paris and the river is full of giant tentacles which bend down to hamper your progress. Some tracks feature different routes to allow you to get ahead of your opposition. Tracks are also littered with Monster High coins which fill up a special bar when collected. Once full you can activate the unique power of your current character.

Sadly the racing is actually quite boring and the tracks seem too long for a title aimed at kids. It would have been nice to have a wider variety of shorter tracks. It would have also been nice to see a multiplayer component so players could race with friends but sadly this is absent.

The team element ends up getting in the way of doing well in races when you forget to switch before your stamina runs out. For kids this can be very frustrating as they need to do well in order to unlock much of the included content. Parents will likely need to help out to unlock the more difficult tracks and characters. Most frustrating is how unforgiving the game is of mistakes such as clipping a wall which can be near impossible to recover from.

Monster High Skultimate Roller Maze will appeal to Monster High fans but sadly it’s not a great game and won’t keep them entertained for long. Going for a pure racing title seems a mistake as it’s not really what fans would want from a Monster High game. They’d be happier interacting with the characters and dressing them up much like they do with the dolls. Overall it’s a missed opportunity.