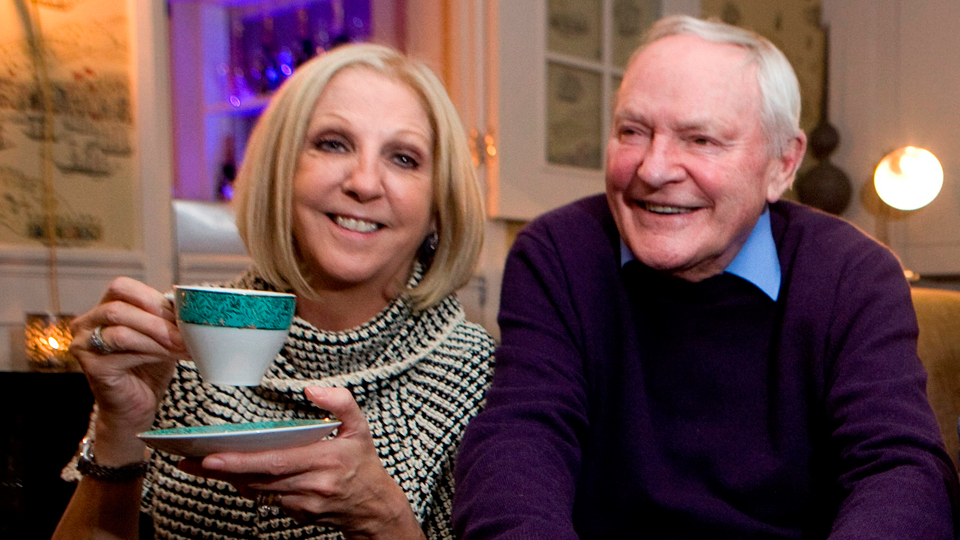 It’s great to see a bittersweet poignant piece of new writing enjoying a national tour and drawing the crowds. Maurice’s Jubilee’s current stop is at the Churchill Theatre in Bromley.

It stars Julian Glover (a seasoned stage actor, best-known for his villainous turns in James Bond, Indiana Jones, Star Wars and Doctor Who to name but a few) as a ninety-year old terminally ill patient, resiliently facing his final illness at home with the support of his wife and nurse. Maurice spent the night before the coronation in 1952 looking after the soon-to-be Queen Elizabeth II. That night he made her a promise, that if they were both still alive in sixty years… Well, that single evening has haunted Maurice ever since and cast a shadow over his long marriage to Helena (Gay Soper). Now the Queen’s Diamond Jubilee is impending, but will Maurice live to see it and fulfil his promise?

Maurice’s Jubilee is written by Nichola McAuliffe, who also plays the nurse, Katy. McAuliffe is best-known as an actor, perhaps most successfully playing the lead opposite Duncan Preston in the medical sitcom Surgical Spirits. One can only guess as to why McAuliffe hasn’t found the time to write more, since her debut full-length play is an astonishingly rich and well-conceived work. It is poignant, truthfully observed, and often (it’s important not to understate this) very, very funny. McAuliffe brings her actor’s ear for dialogue to bear in her writing, and yet she has also structured a captivating story and created three memorable characters that live and breathe. It can only be hoped that the success and overwhelmingly positive reception to Maurice’s Jubilee spurs her further down the literary path.

The cavernous stage of the Churchill is dealt with by some brilliant design work (Christopher Richardson), where the front room of a bungalow is angled towards the audience at the front of the stage and the rest is blacked out. This allows an intimate three-hander about life, death, fantasies and regrets to play out to a huge audience without any of the intimacy of the piece being swallowed inside a cathedral-sized setting.

The performances are some of the best you are likely to see on stage anywhere for some time. McAuliffe, who apparently didn’t write the part for herself, is perfect as the big-hearted self-effacing nurse Katy who has a penchant for amateur dramatics. The part of Helena, Maurice’s long-suffering wife, is a tricky one to nail as it would be easy to make her unsympathetic since she is frequently (justifiably, one feels) irate about Maurice’s monarch obsession. Her battiness and inability to face the reality of Maurice’s illness humanises her, and Gay Soper is wonderfully warm in the part. Remarkably, as Glover graciously pointed out at the end of the show, it was her first performance in the part in front of an audience; yet Soper seems to know Helena inside out.

With the benefit of first-class support, Julian Glover delivers a central performance of emotional truth that draws upon his wealth of theatrical experience. He is simply superb, capturing the truculence of the elderly, but compensating with a lucid charm. Glover delivers a monologue at the end of the first act that lasts around ten minutes that has the audience entranced. Anyone who has seen him perform Beowulf will know what an incredible storyteller he is, and the wonderful moment of quiet and stillness before the interval is Glover at his very best and worth the entry fee alone.

It’s true that at times Maurice’s Jubilee strays into the territory of fantasy, but it does so unashamedly. Ultimately, with six tumours pressing against his skull, the nasty reality of Maurice’s condition is soothingly counterbalanced by the hopes and aspirations that occupy his mind in his final days. It’s impossible to begrudge the fantastical elements, encompassing the neat resolution to the piece, since they are played with such conviction through very real human motivations; and the conflicting emotions surrounding a man at the end of his life prevent the threat of derailment into mawkishness. Sharp edges often come to the fore, especially in the first act, when you don’t know whether to laugh or be shocked.

Maurice’s Jubilee is a captivating, nuanced character piece, and the very human story at the heart of it ensures universal appeal. It’s a gorgeous piece of writing, which fully deserves its national tour, and the performances are breathtakingly good. Go and see it with this cast. It’s a great play and great theatre.