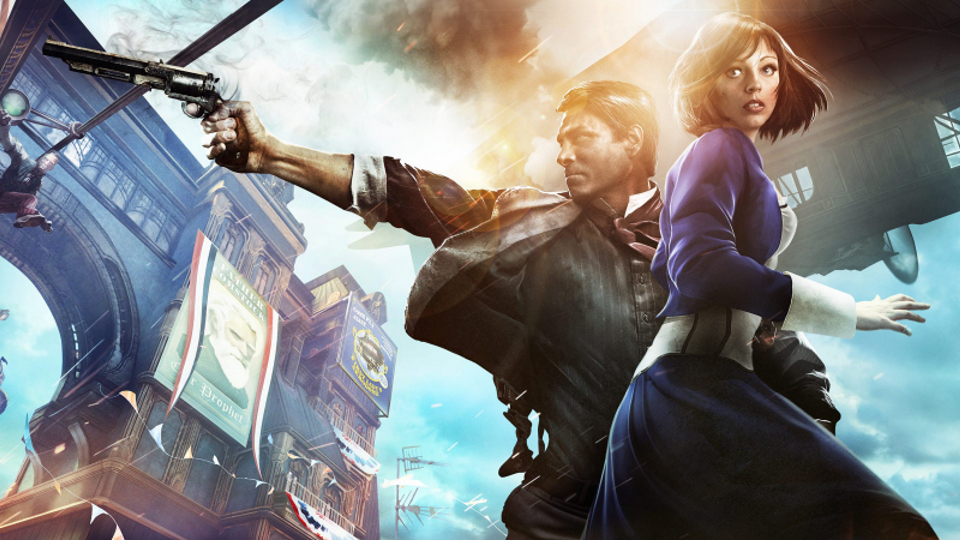 BioShock Infinite is the third game in the series and the developers of the original, Irrational Games, are back at the helm. Although nearly six years old the original remains one of the most praised games of all time and is still a standout title of this generation. BioShock 2 followed in 2010 and was again well received but it struggled to match its predecessor. After a lengthy development have Irrational managed to exceed the original? I took a look at the game on Xbox 360 to find out.

BioShock Infinite is both a similar and very different game. This time around Irrational have abandoned Rapture and the 1960’s and instead have set the game in 1912 in the city of Columbia. Although heavily influenced by historic events the game is set in an alternate reality where Columbia floats in the sky.

The city is ruled, and was founded, by antagonist Zachary Hale Comstock who is also known as The Prophet. Comstock’s vision for the city is as a kind of Utopia that puts right all the things he disagrees with about America which he refers to as “the Sodom below”. He runs things like a religion and the majority of the populace fall into his Founders faction.

You play as protagonist Booker DeWitt, a former agent and soldier. Booker has run into hard times and has run up a huge gambling debt. He’s been offered a lifeline to wipe out the debt which involves travelling to Columbia to bring back a mysterious young woman named Elizabeth. She’s been locked in a tower for nearly her whole life by Comstock who refers to her as “The Lamb”.

The first thing you notice about the game is how gorgeous it looks. Being up in the sky instead of under the ocean Columbia is a very different place to Rapture. Instead of lots of dark claustrophobic corridors and leaking water everything is brightly coloured and you can almost feel the sunshine on your face. It’s a very interesting city and it feels alive due to the incredible detail and citizens going about their daily business. It’s one of the most impressive game worlds I’ve ever seen and it is well worth exploring.

The city is far more than just a pretty backdrop though as the game explores many controversial subjects such as xenophobia and racism. The city is littered with Comstock’s propaganda posters and kinetoscope machines where you can watch short black and white films. Battling against the Founders are the Vox Populi who are led by Daisy Fitzroy. You cross paths with this faction many times and will spend much of your time in Columbia learning more about the people of Columbia through taped recordings on collectible Voxaphones.

Columbia is quite fragmented and exists on multiple floating islands and levels so it has no use for roads. Instead there is a network of Sky-Lines which are used to transport cargo crates as well as people via gondolas. Early in the game Booker obtains a special handheld device called a Sky-Hook which can be used by a single person to ride the rails. Zipping along a Sky-Line whilst hanging on a Sky-Hook feels a bit like riding on a rollercoaster. While riding you can alter your speed, shoot your weapons, jump to alternate Sky-Lines and perform a devastating Sky-Hook drop attack on enemies.

The Sky-Hook also comes in handy as one of the most brutal melee weapons I’ve ever seen. It’s capable of breaking someone’s neck, burrowing into their chest or face and can even take their head clean off. As gruesome as the kills are it’s incredibly satisfying to use and essential for staying alive when you are low on ammo.

Booker can carry two weapons at a time in addition to the Sky-Hook. He begins the game with just a pistol but soon has access to all manner of guns including carbines, sniper rifles, shotguns, RPG’s and some more exotic ones too. Booker also gains access to Vigors and Gear which replace Plasmids and Tonics from the previous games. Booker has four Gear slots for different parts of his body and Gear is tied to a particular slot. You need to pick and choose which gear best fits your current situation.

Vigors come in liquid form and once drank they permanently grant Booker the ability to use it. Drinking one treats you to a shocking transformation to Bookers hands as the Vigor kicks in. In total there are eight Vigors to discover throughout the game which can be accessed by holding the left shoulder button. It’s also possible to have two different Vigors paired up for quick access and certain combinations of them work together to boost their effects. Using a Vigor requires Salts so you need to keep these topped up at all times.

The Vigor system can be a little overwhelming but the game helps by introducing them throughout. You can get by using just your favourite one or two but they do bring a lot of depth and replayability. Each can be upgraded twice and they also have alternate modes that allow you to place them down as traps. I found Possession to be the most useful as you can hack vending machines and turn enemies into temporary allies. Bucking Bronco is useful for crowd control as it throws enemies up into the air. Undertow uses water to grab enemies from afar or to push close enemies away. Return to Sender acts as a bullet shield that can collect bullets for ammo or even fire them back.

After Booker rescues Elizabeth things get really interesting. She becomes a constant companion for much of the remainder of the game and there’s a strong bond between her and Booker. BioShock Infinite takes the crown for the best AI companion I’ve ever encountered. Elizabeth is simply an incredible accomplishment.

Elizabeth is brought to life through fantastic art, motion capture and voice acting. She moves around intelligently and never gets in your way. A simple glance at her face or even her posture can tell you how she is feeling about the current situation and she’s incredibly expressive. When moving around she doesn’t often follow you, instead she actually predicts where you are going and makes herself useful. She’ll toss you coins, ammo and supplies when you need them. If Booker goes down in combat she keeps him alive.

Elizabeth also has a special power which allows her to open up Tears in the fabric of reality. Booker can see the Tears that are available in a given area and then ask Elizabeth to open a specific one up on demand. She can only open one at a time forcing you to choose which is best. Opening a Tear might bring in a crate of health packs, a powerful ally, specific weapons or even some cover to hide behind.

The story is driven forward by the relationship of Booker and Elizabeth and the dialogue between them is fantastic. There are plenty of twists and turns in the story as the game progresses but I won’t spoil any of them here. So many games disappoint or feel rushed at the end but that’s not the case here and I’m confident most players will come away amazed.

On your first playthrough you should expect to put in around 15 hours and then want to replay it over. After completing it you get to unlock the super tough 1999 mode which I can assure you is extremely challenging. If you don’t fancy the extra difficulty you’ll be pleased to hear that the game is also set to be expanded via three DLC packs and there is a season pass available.

Greg Ellwoodhttp://www.entertainment-focus.com
Greg is the Deputy Editor of Entertainment Focus. He writes about Games, Tech and TV. You can find him on Xbox/PSN/Steam as Tahllian.
Previous article
Tomb Raider review
Next article
Blizzard Entertainment announces Hearthstone: Heroes of Warcraft

2K Games Have You Covered For Gaming Gifts this Xmas

The Best Horror Games Of All Time

XCOM: Chimera Squad is out now