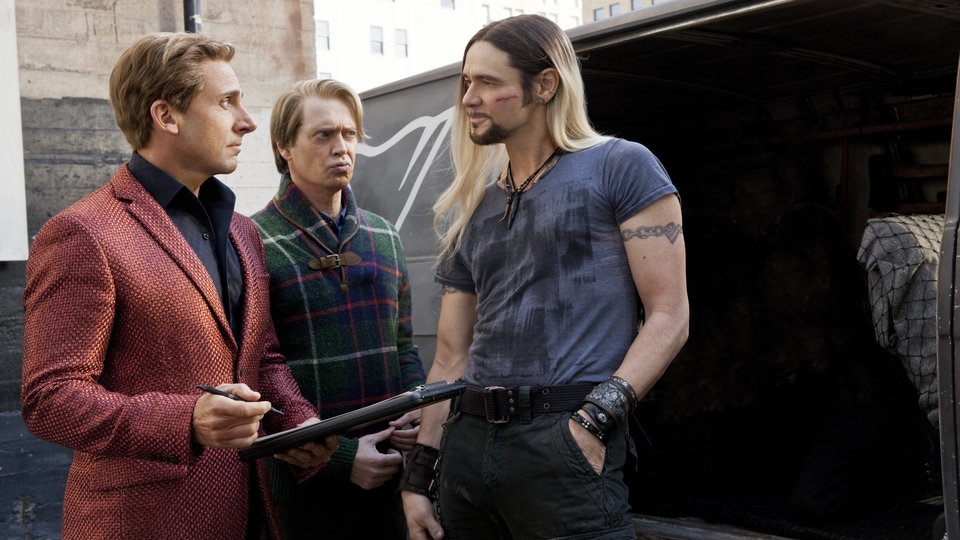 Burt Wonderstone (Steve Carell – The Office) and his life-long friend Anton Marvelton (Steve Buscemi – Boardwalk Empire) have been practising magic since they were boys. Having gained worldwide fame and fortune, they now enjoy a hotel residency in Las Vegas and are the talk of the town until a brand new urban street magician named Steve Gray (Jim Carrey – Yes Man) enters the scene. Gray steals the limelight from Burt and forces him to re-evaluate a life he has taken for granted. With the help of a kind assistant named Jane (Olivia Wilde – TRON: Legacy) and a former magician named Rance Holloway (Alan Arkin – Little Miss Sunshine), Burt goes about rebuilding his name and in doing so, rekindles his love affair with the art of magic.

The Incredible Burt Wonderstone is the kind of comedy that should guarantee big laughs just based on the cast list alone. Having so many talented people onboard makes the film a success but the script does lose momentum on more than one occasion around the middle, leaving you a little underwhelmed. Thankfully though, the quality of the cast drags this film back up onto its feet for a finale that’s very amusing and makes the movie a solid, if mildly forgettable project.

The set pieces are very well observed. Having super-magician David Copperfield as a creative consultant on the film gives The Incredible Burt Wonderstone a very genuine, larger-than-life feel. Anyone who has been to Las Vegas can identify with the shows Burt and Anton put on. The Hangman sketch is brilliantly funny, especially when the lovely Olivia Wilde shows up. It gets even funnier when Burt decides to do the two-man show himself.

Steve Carell is excellent as Burt and gives the film a sense of everyman charm. Throw in Jim Carrey’s zany antics and the bubbling but good-natured comedy of Steve Buscemi and you have a trio that gleefully play to each other’s strengths. Then there is amazing support in the shapely form of Olivia Wilde (who, it has been scientifically proven, makes everything better). Plus there’s a trio of actors who all know how to play their parts well (Alan Arkin as a hilarious mentor to Burt, Jay Mohr as a washed up magician working the circuit and The Sopranos James Gandolfini as a wealthy hotel owner).

There are a few problems, namely a plot that loses ideas in the middle third and doesn’t quite know where to go. It takes a little too long for Burt to learn the error of his ways but once the inevitable happens we are treated to some wonderful comedy moments. Burt and Anton both crying at each other will have you crying in the aisles, its comedy gold. Then there’s the kids magic show where Burt and Steve challenge each other whilst the comedy timing of Alan Arkin is brilliantly utilised by director Don Scardino.

As comedies go, The Incredible Burt Wonderstone does just about enough to win you over. It’s not a classic, especially given the talent associated but it still comes out as a lot of fun. Worth it alone for seeing Jim Carrey and Steve Carell finally onscreen together, Burt Wonderstone will provide laughs and light-hearted hi-jinks aplenty that will leave you with a smile on your face.