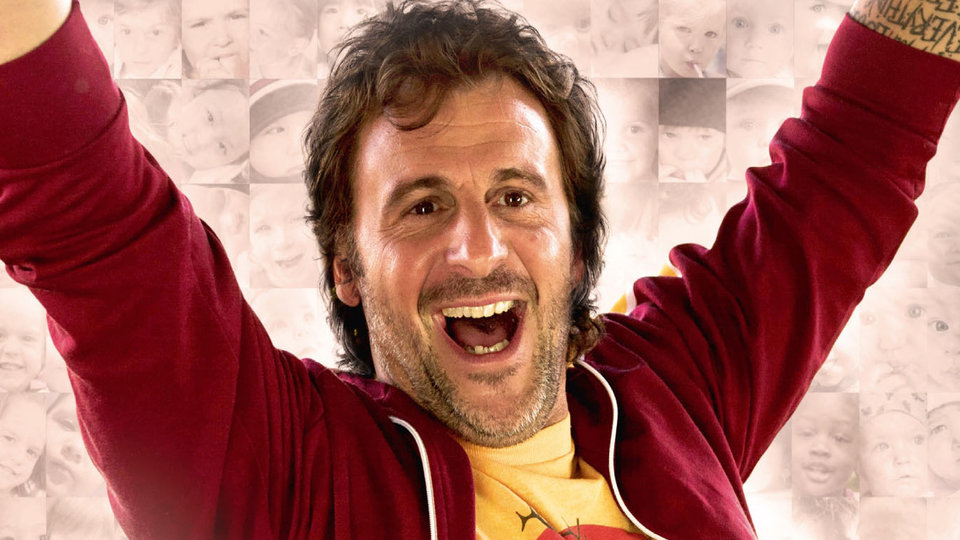 40-something David Wozniak (Patrick Huard – Good Cop, Bad Cop) doesn’t have any adult responsibilities, yet one day his girlfriend Valerie (Julie LeBreton – The Good Lie) surprises him with the news she is pregnant. The problem is, David’s past has caught up with him. 20 years earlier he made a series of sperm donations, and now he has been told he is the father to 533 children – of which 142 want to know his identity. David’s life suddenly becomes very adult, but how will this big kid cope?

Starbuck is a French language film that won rave reviews in its native country when released back in 2011. Finally it is getting an English subtitled release and not a moment too soon. What initially starts out as a light hearted comedy soon becomes a film with a point to make, but with a humorous angle. This is the type of film that will have you crying with laughter one minute and just plain, old crying the next.

The film starts quite slowly as we see the day to day life of David, but it soon moves into gear when he sets out to secretly find each of his 142 children that want to find him. This is the main part of the film as we get to see a majority of the lives of these children/adults and how they have each grown up with different ideas, agendas, lives and loves.

There is a wide spectrum for David to see, and he clearly has a couple of favourites, but we enjoyed seeing all of these kids and how they are living theirs lives. Some are unsure of their lives, others need help and a couple are just plain nasty. One of our favourites was the Goth son that comes to live with him, and the way he tries to make David understand his lifestyle and the way he dresses etc – it is completely grounded in reality and is extremely funny. Also, when David finds out that one of his kids is a famous football player at his local club – who wouldn’t want to find out their offspring is a brilliant football player?

But don’t be fooled into thinking this is just a comedy, as there are many serious angles here. The whole point of David anonymously donating sperm and then years later his kids being able to track him down is very much a taboo subject in modern day life, but it’s handled wonderfully here and we really felt for David when he discovered the complications that arose from his regular donations for money back in the day. We are treated to both sides of the story, as we see some of the kids reasons as to why they want to contact their biological father and this gives the film a balanced opinion.

Starbuck could be the perfect double feature with legendary French film Amelie. They both have the same styling and heart-felt story-lines (with added humour) that make it irresistible to hate either of these films. Laughter and tears make this an absolute winner on all scores; so get your tissues ready.

In this article:Patrick Huard, Starbuck