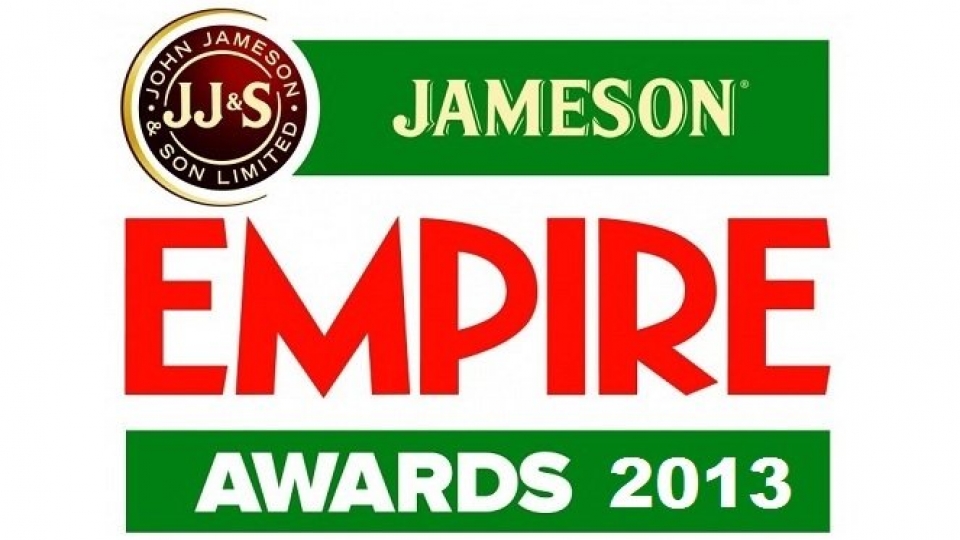 The Jameson Empire Awards for 2013 were announced this evening from London’s Grosvenor House Hotel.

Voted for by the loyal readers of Empire magazine, the Jameson Empire Awards 2013 were the biggest awards yet, with a whole host of celebrities on show to champion the best films of the year. The results showcased the movies and their makers who struck a chord with the paying public.

Dame Helen Mirren was bestowed with this year’s Empire Legend award, which was presented to her by Tom Hiddleston. Celebrated for her performances in everything from Gosford Park to The Queen, The Long Good Friday to The Cook, The Thief, His Wife, And Her Lover and this year’s Hitchcock, she follows last year’s inaugural Legend winner, Tim Burton.

Danny Boyle also won gold at the Awards, collecting the Empire Outstanding Contribution award. The award acknowledges Boyle’s stellar career so far, with highlights cited on the night including his outstanding work on everything from Shallow Grave to Trainspotting, Slumdog Millionaire, 127 Hours and this year’s Trance.

Collecting the Empire Hero award was Daniel Radcliffe, who was presented with his award by Woman In Black director James Watkins. He joins an illustrious list of previous winners including Michael Fassbender, Keira Knightley and Jude Law. Radcliffe was also in attendance on behalf of The Woman In Black, which won the award for Best Horror presented by Café de Paris.

The Hobbit: An Unexpected Journey, which had been neck-and-neck with Avengers Assemble in the nominations with five apiece, claimed two wins, taking Best Sci-Fi/Fantasy Film presented by MediCinema and the Jameson Best Actor award, presented by Rebecca Hall, which was picked up by Martin Freeman.

Jennifer Lawrence won Best Actress presented by Citroën for her role in The Hunger Games and thanked the Empire readers from on location in Hawaii. Lawrence’s win tops off a long run of awards this year including Best Actress Golden Globe and Oscar ® awards for Silver Linings Playbook.

Best Male Newcomer presented by Entertainment Tonight went to Tom Holland for his role in The Impossible, whilst Best Female Newcomer was picked up by Samantha Barks for her role in Les Misérables. Both actors were in attendance to collect their awards.

This year’s winner of Best British Film presented by Tresor Paris was Sightseers. There to accept the award were co-writers and stars Alice Lowe and Steve Oram. Previous winners include Harry Brown, Kick-Ass and RockNRolla.

The Jameson Empire Done In 60 Seconds short film award-winner was Philip Askins for his remake of Blade Runner. He was shortlisted on a list of 22 nominees by the voting public, which were then whittled down to the Top 5 by 6 judges: Tom Hiddleston, Edith Bowman, Alex Zane, Joanne Froggatt, Bauer Media CEO Paul Keenanand Editor-In-Chief of Empire Mark Dinning, who finally picked their winner.

Editor-In-Chief of Empire magazine, Mark Dinning, commented: “Given how vibrant and exciting the world of movies is at the moment, it’s perhaps no surprise that this year’s Jameson Empire Awards have been the best ever. In the year that box office records were smashed to pieces by the likes of Skyfall, it is terrific to see the Empire readers honour those achievements, with the movie awards that actually reflect the films that people really care about.”

The Jameson Empire Film Awards Special will be transmitted on Saturday March 30 on Sky Movies at 8.30pm and will be repeated on Sunday March 31 at 7.30pm onSky Movies Showcase. It will also be repeated throughout the week and on Sky Go and On Demand on the Sky Box.

The 18th annual Jameson Empire Awards were once again held at Grosvenor House, a JW Marriott Hotel, in Park Lane in the heart of London’s Mayfair.

Check out the winners below.

The Art Of 3D presented by RealD

Jason Palmerhttp://www.entertainment-focus.com
Jason is a film contributor for Entertainment Focus (EF) bringing you the latest news and reviews from the movie world.
Previous article
Sightseers DVD review
Next article
Welcome To The Punch review