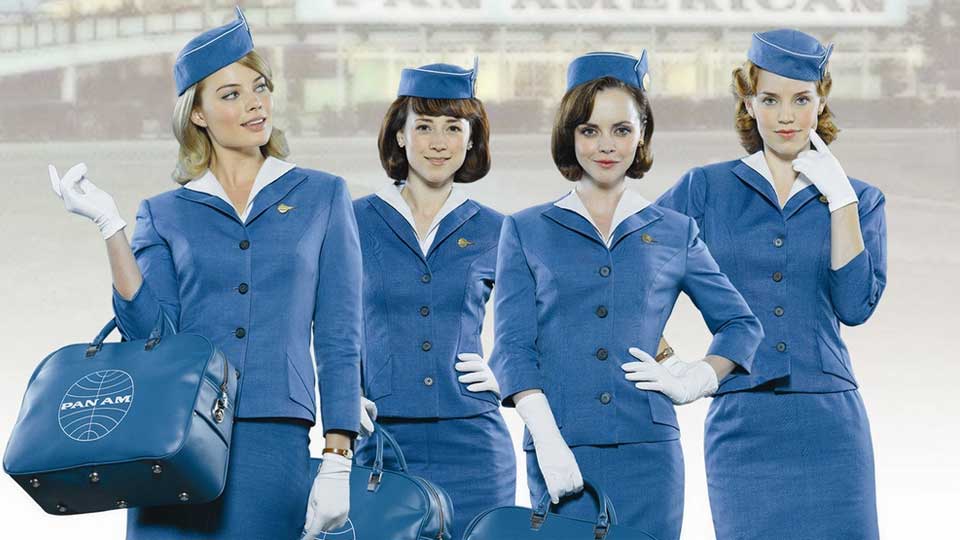 Pan Am originally debuted in the US in September 2011 and despite high ratings for its season premiere, the show soon shed the majority of its audience leading to its cancellation. The critics loved it and comparisons were made between the show and Mad Men thanks to its style and the way it was shot. Unfortunately something didn’t quite keep the audience gripped and the show was laid into an early grave.

Now the show has been released on DVD as a 4-disc set featuring all 14 episodes of the show. Centering around sisters Kate (Kelli Garner) and Laura (Margot Robbie) Cameron, the show follows the lives of the Pan Am air-stewardesses as they fly around the world and experience life outside of America. Laura dumps her fiancé at the altar and joins sister Kate at Pan Am where they work with feisty Maggie (Christina Ricci) and French stewardess Collette (Karine Vanasse). Unbeknownst to Laura and the other stewardesses, Kate is secretly working as a spy after the mysterious disappearance of stewardess Bridget (Annabelle Wallis). Their lives also intertwine with those of pilots Dean (Mike Vogel) and Ted (Michael Mosley) as business and pleasure get muddled along the way.

Having watched the entire series it’s a little baffling that the audience deserted the show after the first few episodes. Pan Am is a solid period-based drama with plenty of romance and a touch of the thriller genre throughout. The performances across the board are better than the majority of shows still being broadcast so there’s really no rhyme or reason as to what went wrong for the show. Perhaps some viewers couldn’t pinpoint the genre of the show and felt there was a little too much going on?

One of the strengths of the show is that the central four female characters get fleshed out impressively over the 14 episodes. Whilst Kate and Laura appear to be the central characters during the first few episodes, it soon becomes clear that each of the four women has an equal role to play. Kate is trying to get to grips with her new double-life whilst Laura is trying to stand on her own two feet and establish her independence. Maggie has spent her life manipulating people to get what she wants and she’s definitely the most enjoyable character on the show. Collette is a slow-burn character but we soon learn there’s more to her than just making up the numbers. Her tangled relationship with pilot Dean is one of the central strands of the show.

The four actresses are simply wonderful. Margot Robbie is brilliant as Laura and she manages to balance naivety and innocence with newfound confidence and a determination to succeed. The camera loves her and we enjoyed her performance. Christina Ricci is the other standout on the show. Since finding fame as a child star she hasn’t found it easy to get roles that match her talent but in Maggie she’d finally found one. She is so devious and cheeky that you just love watching her.

The release is packed with special features including behind-the-scenes footage, interviews and featurettes focusing on different elements of the show.

Pan Am’s life was cut cruelly short and we would have loved to have spent more time with these characters. The season ends on a cliff-hanger that we’ll never see develop and we’re saddened by that. Quality television is hard to come by and we can’t believe that viewers didn’t show their support for something of this quality. Pan Am is a superb show and at least we’ve got 14 episodes to re-watch over, and over, and over again.

‘Barbie’ – the first teaser trailer arrives along with a poster