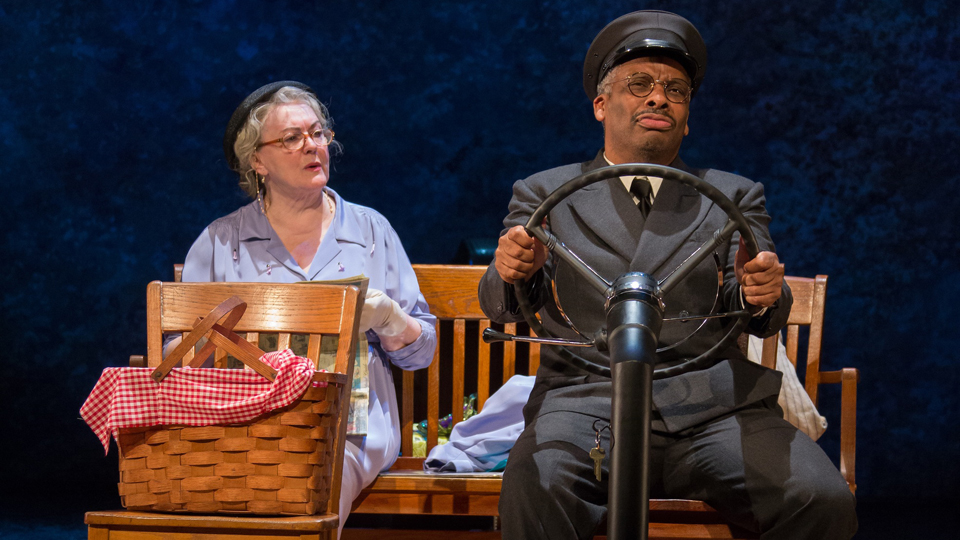 Alfred Uhry’s touching one-act play about racial prejudice and the civil rights movement in small town America, Driving Miss Daisy, has been revived for a major UK tour. It’s current stop is at the Churchill Theatre in Bromley, where it plays until Saturday.

The play, which has also been turned into a celebrated motion picture, reveals in extraordinary detail the changing relationship between the elderly Daisy Werthan (Gwen Taylor) and her aging black driver Hoke Coleburn (Don Warrington) both before and after the civil rights movement, and as they develop an unlikely friendship over the years. The third character who carries the narrative is Daisy’s son Boolie (Ian Porter).

Driving Miss Daisy is a beautiful, clear and simple story, and as such so long as it enjoys solid performances it’s hard to go too far wrong. Don Warrington is excellent as Hoke Coleburn, though the high register and southern drawl of his character voice (for audiences so used to his immaculately smooth tones) takes a while to adjust to. Once you catch on, the rhythm of his speech patterns and comic timing is superb, and his noble, dignified, and mercifully sassy Hoke Coleburn is a delight to watch.

It’s Gwen Taylor who steals the show as the increasingly elderly Daisy Werthan. She nails the performance, finding the development of her character as each scene progresses, but allowing room within her portrayal for humour to creep in. Taylor and Warrington are superb together. Ian Porter makes for solid support, though he does succumb to the temptation to ham up his less showy part on a few occasions, and doesn’t reveal enough internal conflict during the pivotal moment when he (a liberal Jew) tries to forbid his mother (a conservative, prejudiced Jewish lady at the start of the play) from attending a dinner celebrating Martin Luther King.

It could be that such poignant moments of high drama simply become lost within so large a stage and auditorium as the Churchill Theatre, which often accommodates epic musicals and ballet. Moments of intimacy aren’t impossible, but more of a challenge, and this production occasionally falls short. In fact, the original run of the play started out in a small theatre off Broadway and is probably at its most powerful when the audience is close to the action. The sound levels aren’t quite right either, with a musical score (always an unnecessary intrusion for a stage play) drowning out the actors’ voices a few too many times.

Driving Miss Daisy succeeds well when it embraces the simplicity of the narrative structure and conveys this in its realisation, such as the simple but effective rendering of Daisy’s car (though the actors rightly don’t bother miming opening and closing the doors, making the overlaid car-door sound effects somewhat disjointed). By far the most successful innovation is the clever use of back projections to offer a sense of place, and a well-realised moving road. It’s a concession to playing on a large stage that adds to, rather than detracts from, the power of the writing.

Despite a few shortcomings, the two lead performances in Driving Miss Daisy are excellent, and there are some beautifully crafted moments of tenderness to enjoy.